I first visited Bangkok a year a half ago and I’ve been back twice. I love visiting Bangkok although it seemed a lot quieter during my last trip at the end of January 2009. Tourist numbers definitely seemed down. Sometimes I didn’t see another foreign face as I strolled along some parts of Sukhumvit Road. I always like to try and get off the beaten track a little and being the intrepid amateur photographer that I am, I decided to photograph something other than just the tourist sights. I’d heard of the Klong Toey area and that it wasn’t far from Sukhumvit. I’m not that familiar with Bangkok only staying a week or so each visit, so I wasn’t sure if it was safe for a foreigner to visit Klong Toey or not. My helpful and dependable Thai friend seemed to think a visit in the daytime would be fairly safe, so she organized a taxi at a fixed rate for a few hours. Twenty minutes later the taxi arrived at my hotel and we were on our way. I don’t speak Thai but I got the impression that the driver wondered why I wanted to visit such an area. Did I think that I could make a difference? Did I think I could help change peoples lives with a few photos posted on the internet?

Even with the famous Bangkok traffic we arrived at our destination within fifteen minutes. My Thai friend advised that I could stop anywhere that interested me. I didn’t know what to expect and I was surprised to see ATMs and convenience stores along the main road. Apart from the odd pile of garbage the street really didn’t seem that bad. Not surprisingly there were no foreigners in sight. I noticed a narrow lane way only wide enough for motorbikes so the taxi pulled over and my tour guide and I ventured into the unknown, for even she had never been here before. Two mopeds slowly putted past us and then there was silence. The atmosphere seemed almost peaceful. The first people we encountered were a baby with its mother and grandmother. They seemed very friendly and didn’t mind me taking a few photos. My assistant chatted with them in Thai. I could only guess that they were wondering why a farang would want to wander around the back laneways of Klong Toey. Maybe they were just interested in where I was from. I didn’t ask my assistant. I just let her do the talking and we then continued further into the maze. 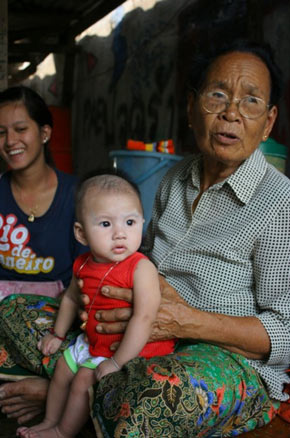 We came to an intersecting laneway and I stopped to take a few photos in each direction. Up ahead I could see two middle aged ladies smoking and a mangy dog.

“Farang bah!” I heard them comment, with big smiles.

As I said, I don’t speak Thai but I knew this meant crazy foreigner.

“Why are they calling me crazy?” I asked my friend.

“Because it’s not really a good idea taking photos around here,” she replied.

“Why? It seems quite safe, almost peaceful.”

“There are drug dealers around here. If you take their photo they’re not going to be too happy.”

“I see. So do you think it would be ok if I came here at night by myself?”

My friend just gave me a look as if I really was crazy.

We ventured to the right and met some more friendly people. There were two little girls standing on a motorbike, with their mother standing nearby. They didn’t mind their photo been taken. I can’t forget how their faces had such genuine happy smiles. I slipped the children 20 baht. I knew that it wasn’t a lot of money, even in this area, but I was on the last day of my holiday and finances were running low. My friend didn’t want to venture any further into the warren and suggested we make our way back to the main road. I followed her advice. As we walked back I peered through a window, covered with iron bars, into a small residence. I saw a man in the small dark cluttered room, lying on a couch watching a small television. We walked past washing hung up on the outside of the small dwellings. There were also a few motorbikes parked along the laneway. There was even a small school with several children inside, lying on the floor, taking their afternoon nap.

I honestly couldn’t sense any danger. The atmosphere had become serene.

We stood to the side to let a motorbike slowly pass by and then we were back at the main road. 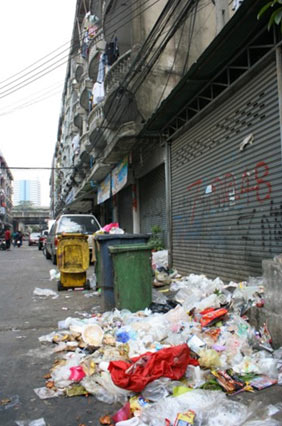 The taxi took us a few hundred metres further along the road and pulled over again. My friend and I hopped out and I started photographing anything and everything: the apartments above the shops; motor-bikes; people; sleeping dogs; piles of garbage. I went 20 metres down a side street and began to feel uneasy for the first time. As I took a few photos, I noticed a heavily tattooed Thai man smoking a cigarette who was taking an interest in what I was doing. I didn’t want to outstay my welcome so my friend and I jumped back in the taxi and ventured another few hundred metres along the road. My friend wanted to stay in the taxi this time and flick through her gossip magazine. I understood. Strolling around a slum wasn’t her idea of excitement. She advised me to stay within sight of the taxi, just in case. I nodded and boldly wandered off down a side road. There were smiles and shouts of hello from people at the street side food stalls. People didn’t stare or seem to mind being photographed. There were the usual narrow laneways, dogs sleeping under cars, street stalls, apartment buildings covered in iron bars and washing. After a few more minutes the taxi pulled up nearby, maybe my friend had got worried because I’d disappeared out of sight. I photographed a woman who was looking after a very old and sickly looking dog. The dog really was a very sad sight to see, yet the owner was fussing over the poor animal in a way I’ve never seen in the west, or in Japan, where I live. It’s good to see that not all dogs are neglected. I took a few more photos of a motorbike repair shop after my friend had asked permission and we once again went further along the street in the taxi and stopped again. 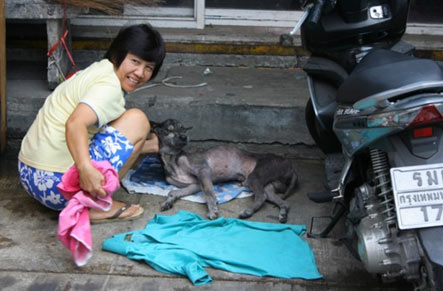 I slowly ambled around photographing anything and anyone of interest, thankful that the weather wasn’t too hot. However, it wasn’t exactly cold either. I must’ve missed the unusually cold weather I’d heard about in Thailand. We stopped at a local drink stall and ordered some syrupy drinks with ice. It’s thirsty work taking photos! My friend chatted with the stall owner as I got some more photos. We then made one last stop near a railway line as we made our way out of the area. I quickly took my last photos and that was that. I jumped back in the taxi which then turned onto a major road and the squalid expanse quickly disappeared behind us. I excitedly scanned through the hundreds of photos on my digital camera as we cruised along in the taxi. Unfortunately, I hadn’t really taken any photos worthy of National Geographic, but the visit had been a very worthwhile experience. An experience I couldn’t have had without the help of my Thai friend. I was disappointed with my photos, but as I looked out at the city around me I felt an unusual calmness.

Later that evening, just before I left for the airport, I gazed at the view from my hotel room window and thought about the kindness and the smiles I’d seen amongst the poverty. Every trip to Bangkok had been different. On each trip I’d learned a little more. I’d learned about Thai people and I’d learned about myself. Travel truly is broadening.

It's funny you should wander through Klong Toey taking photos as it is something I have wanted to do for a while and thought would make a good column opener. You beat me to it!