Last Thursday it was a chilly morning when I set out for school on my bicycle. The thermometer outside the kitchen door read 7 degrees Celsius. (I have obviously been away from America for longer than I realized to actually be thinking in Celsius! Doing a not so quick conversion °F = °C × 9⁄5 + 32 …let’s see that comes out to 44 degrees Fahrenheit. Back home in Massachusetts that would be considered a balmy winter’s day. (That day it was -20 back in The Berkshires.) Here it is considered one step removed from Antarctic conditions. It was certainly cool enough that I put on a windbreaker and a pair of gloves before heading out in the predawn darkness. It was certainly cool enough that I felt sorry for the monk I see every morning trudging down the road wearing nothing but a thin orange robe. As per Buddhist tradition, he was barefoot. Surely this poor guy must be freezing. Hell. My students are shivering, and they are dressed like Eskimos! I can’t help admiring the dedication that this monk possesses. I don’t think I could handle that degree of austerity. If my brain hadn’t been on autopilot I would have stopped to put something in his alms bowl. Today my basket was literally overflowing with food, because this morning dozens of monks would be at my school to accept offerings. The next day was Teachers Day, and the school thought this would be a wonderful opportunity for all of us to tham boon, or make merit. Right after the daily flag raising ceremony every teacher and student was out on the parade ground with hands in supplication while the monks chanted morning 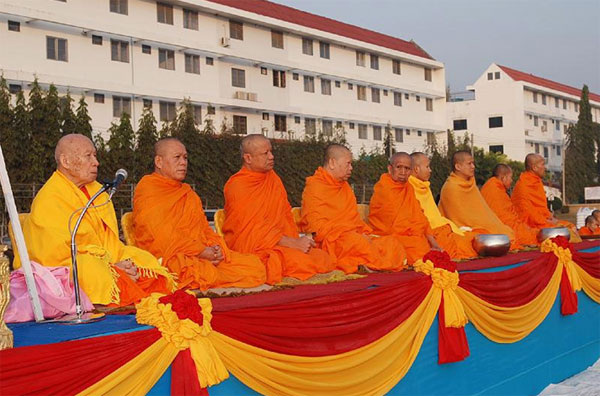 prayers. I have always enjoyed Buddhist prayers. It’s not that I understand them. I doubt most Thais understand them all, since the prayers are in the ancient Pali language. In any case I do find them very soothing. I suppose knowing that that they aren’t about sin and eternal damnation adds something to their appeal. Even though my school is run by a Catholic order, at least 99 % of the students and teachers are Buddhist. There is no attempt to convert anyone to Christianity. Aside from a statue of the Virgin Mary and one of Saint Gabriel, you would never guess that the school had any Christian connection. As part of their education, every Buddhist holiday and tradition is fully observed.

My body is not as flexible as when I was young, and after about 20 minutes I’m having a hard time being comfortable. My back aches, my thighs ache, and I’m feeling decidedly envious of the students all around me who can kneel, sit cross-legged or squat with apparent ease for what seems an eternity. Let me tell you, it’s not easy to be serene when your lower back is killing you!

Eventually though the prayers are over, and it's time to distribute the food we’ve bought to the monks. This is not their breakfast, but supplies to stock up the wats with. How many times have we heard that old adage, “It’s better to give than to receive?” Well that’s what making merit is all about. The act of giving food to a monk or making a donation to a wat benefits the giver. Everyone is in a generous mood today, and so there is a lot of food to be handed out. I thought quite a while before filling my wicker basket the evening before. What I wound up with was: some packs of instant noodles (three flavors), some small packages of rice, some soy milk, some cookies, Ovaltine, assorted fruit, and a package of hard candy. Judging from some the students’ offerings I saw around me, obviously it was thought that there was a severe shortage of cakes and snack food in the monasteries!

If you’ve never had the opportunity to attend one of these ceremonies, here’s the way it works. The monks walk down the line and you place an item or two in their bowls. 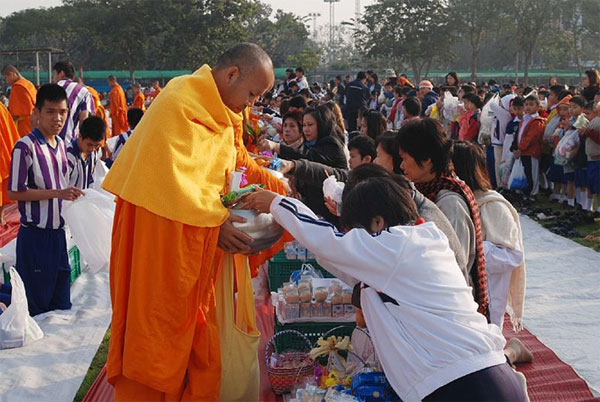 When each bowl is full, which doesn’t take very long, it gets dumped into a large sack carried by some volunteers. Since these large sacks can get quite heavy, today some husky Mathiyom 6 boys (12th grade) were doing the hefting. 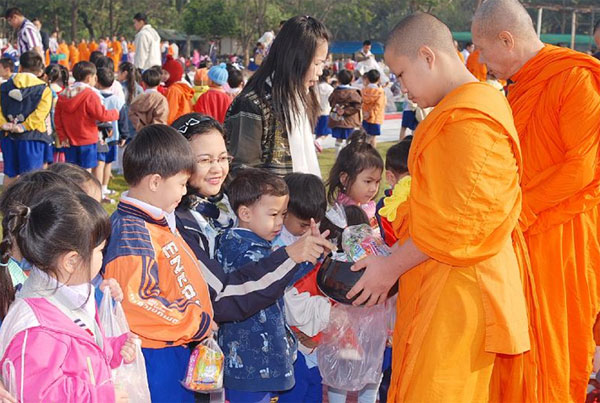 Thai children learn at an early age learn how to tham-boon. This mother was delighted to see her little boy making merit. 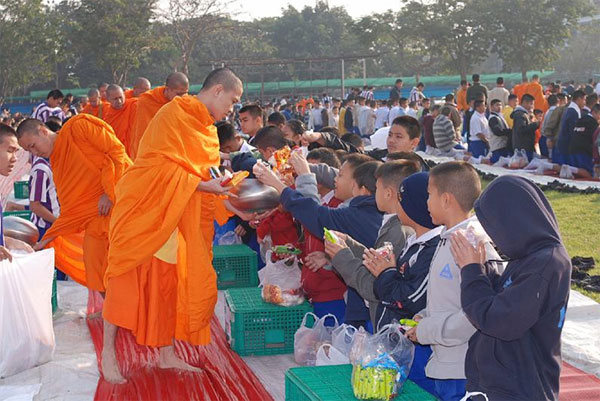 One of the things that’s so amazing about this tradition is that everyone is just sooooooo happy to be taking part of it. Smiling faces were everywhere…even of the boys’ faces!

Eventually all of the food had been handed out, gathered up and carted away, and it was time to begin the academic day. I don’t know if I gained any karma points, but my students and fellow teachers seemed the enjoy “The Farang” honoring an important Thai tradition. I didn’t do it because it was expected of me, or because I was trying to make a public spectacle of myself. I did it for the simplest reason. It made me feel good. If any merit was gained on my path through life, I’ll take it, but that day, thinking of the lone monk walking barefoot along the road; it was just the right thing to do.

It is a very nice tradition indeed.