There was an interesting article in last Sunday's Bangkok Post about the foreign police assistant volunteers. I would like to make
a few comments and suggestions to these gentlemen.

The pleasant ones first.

Wouldn’t a better name be: Visitor Assistants, Visitor Advisors, Tourist Helpers, Tourist Assistants. I mean really, aren’t you supposed to be helping the tourists? Doesn’t a name like this make more sense?

And a quote from the Post, “military style black uniforms, sporting handcuffs, batons, radios and other gadgets on their belts made some people feel uneasy. Army boots and berets appeared totally out of place in the middle of an entertainment
area crammed with bar girls offering their services.’ 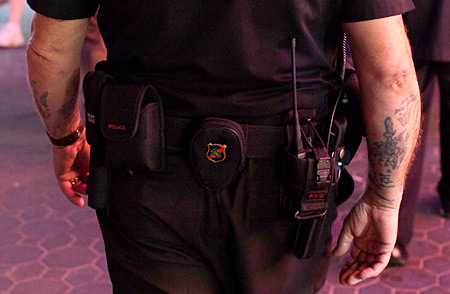 Guys, wouldn’t a pleasant, colorful type of clothing be more inviting? Say, for instance, blue shorts with a flowered shirt (okay relax all you homophobic assistants) or a light blue shirt and yes, even a tie as mentioned by the reporter.

Mr. Miller, the group leader claims that after much research, he decided that it would not be practical to wear light colored clothing. Gee whiz, anyone knows that black absorbs the sun and heat and white and light colored clothing are much
cooler. The real answer is insidious and disturbing.

Reading along one learns that Mr. Miller claims that, ‘We wanted a shirt that will give us some respect and the black shirts do show a little bit of authority.’

Would a psychiatrist have a field day with this one?

And how about all those military style patches on the shirts? One on each shoulder and one on the front of the shirt, how about wearing some metals and brass and a cap with a shiny leather brim?

Are these guys nuts or what?

Most of them are weak minded almost harmless wankers that could not get a job back home as a police officer, fireman or even a school crossing guard to save their souls and have been aching to wear a uniform most of their lives. Human detritus
that back home were gas station attendants, shoe salesmen and gym teachers.

Just who picked out these stupid commando style uniforms I want to know.

And where do they strut around in their military uniforms? That’s easy, Soi Bangla in Phuket and Walking Street in Pattaya. Now please someone write in and tell me that’s because where the tourists are.

No, you immature morons in uniform, it’s because you can strut around thinking that you look cool in front of all those little hooker girls who would normally not give you a second glance unless they were dead broke and were desperate
for money and probably not even then.

Any jerks here want to feel important? Put on a uniform and walk around like you are somebody.

Stroll down Walking Street as if you were important instead of impotent. Tell me you guys don’t chak wao in full uniform in the mirror before you go out.

The Bangkok Post rightfully goes on to question whether proper background checks are conducted on applicants. They are not. Only the most cursory information is requested.

These tourist police assistants are walking around in storm trooper outfits because they claim and I quote, ‘We all love Thailand and that’s why we’re here, to serve the tourists.’ What a laugh.

If you people really love Thailand and want to serve, volunteer in an AIDS hospice, orphanages, schools, feed hungry children, give free English lessons. But not you — you jerks who want to strut around in black uniforms. You think people
respect you? No one does. You are a joke.

Okay, possibly I have been a little harsh. My email address is below. Tell me how many kittens you saved from being stuck in a tree and then strutted down Walking Street trying to look important instead of impotent.

The funny thing is that I know two guys here in Phuket that were on these committees. The first man told me three minutes after we met that he was a United States Navy Seal. This after he knew me for minutes. What a moron. Really, what was
your serial number?’ I asked. Now anyone that has ever been in the service can shout this out in seconds, just ask any ex-service member. Well, he mumbles and stumbled around and finally said, ‘It’s classified.’ I told
him to save the bull sh## for some jerk that just got off the boat.

The second black uniformed police assistant, who had his pants bloused into his boots, thought he looked tough I suppose. I remember my army sergeant telling us many years ago, ‘Boys don’t go into town with your boots bloused.
It just means you are looking for trouble and you may find it.’

Anyway after just two sentences, he mentioned that he was a retired lawyer. ‘Really?’ I said. I always wanted to know what a tort is. What does it mean?’

After mumbling something or another he said he was retired and did not talk business any more.

In closing, Mr. Miller and I quote ‘concedes that sometimes they had to deal with uncooperative foreigners. This is mainly because they don’t really understand what we do. They might look at foreigners in uniform in a foreign
country and say, “look at that.”

This is the most realistic and intelligent sentence in Mr. miller’s psychobabble.

The farang force has a massive image problem. They are deluded if they think that by merely doing a good job in their own estimation that they can forget the PR side of things. The truth is that amongst the expat population they are seen in a horribly negative light. A uniform change and smiling lessons would be a start…

That said, they do perform a worthwhile service.