WARNING – this story does not contain anything about sex, sick buffalos, wives, girlfriends, husbands, red or yellow shirts, or visa problems. If you find innocuous material offensive, move on now!

The morning is Friday 22nd November 2008 in Surin, Thailand which means it is the day for the SURIN ELEPHANT BUFFET 2008, and the day at 7am is perfect. No wind, about 23 degrees Celsius and bright but with a little high cloud to take the edge off the sun. I'm about 15 minutes by motorbike out of town, so it's quiet except for bird and animal noises, with the occasional far away human sounds. I can see a few cows being led along a path by a canal in the distance.

I'm staying with a friend and it's time to depart the house to different places – friend to work, her niece to school, and me to the buffet. You can count – this equals 3 people. There's one motorbike and two helmets. In Thailand this means only one outcome – a crowded motorbike and a totally normal situation!

The bike is a 3 month old Honda 110cc with fuel injection, nice thing, cost around 38,000 baht (about AU$1600) and interestingly, has no registration plate. I comment on this but don't understand the reply i.e. I hear words but they don’t make sense to me. I’m experienced enough here to know there is absolutely no point in pursuing the subject because it is very unlikely that I will ever get an answer that makes sense to me. I have seen this ‘no plate’ arrangement often enough, on cars as well. Maybe the thing is an optional extra?

She says “you drive”. . . . err, hang on, I've owned and ridden plenty of bikes, but not in Asia, and absolutely not with 3 people on board! I've got my Australian licence on me and my international licence as well. The command is repeated, and soon I'm steering down the drive and on to the road, a bit wobbly with the load but motoring along OK. Total safety gear for me equals . . . a pair of sunglasses. Jesus wept, back home I'd be crucified for this, they’d put me in goal and throw away the key. No kidding! Cruising at about 45 km/h seems safe enough! Wide road, not much traffic. I think I'm having fun, but a bit edgy considering the ‘no plate’ situation. What happens if a cop pulls me up?

In the city some streets are blocked off due to the impending descent of 250 elephants, so a bit of detouring here and there, cops directing traffic so fortunately they're too busy to pick me out of the crowd to inspect my credentials. I drop the niece off at school, arrive at friend's workplace, park the bike and walk around the corner to a restaurant and have rice soup for breakfast. I happen to like this Thai dish for breakfast – it seems to set me up for the day, just as porridge and fruit does at home (OK, you can stop sniggering NOW). It's good with cha or coffee, 70 baht (AU$2.90) for two. As is often the case I have witnessed here in Thailand, breakfast doesn't happen at home like it does in my house (how could it? – there's no trace of food in the house – there’s a fridge, but it contains nothing but water). She goes off to work and I'm on the loose. 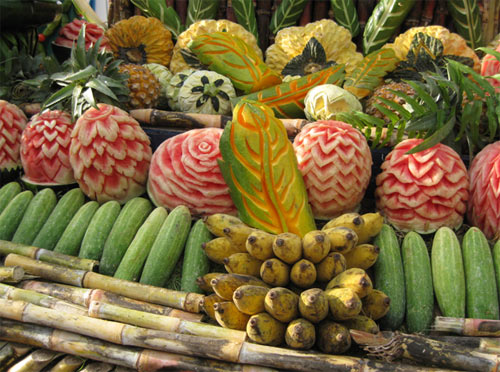 At 8 AM crowds are gathering. The food was laid out last night – fruit, cucumbers, melons, and sugar cane mainly, and there is about 60 tonnes of it (there were guards to fend off the midnight feeders, because some of this food is way better than what some Thais get to eat I reckon). I wonder if 250 elephants can eat all this – that's 240 kg each! Last night I had a good look around the area, so as well as tables laden with food there were floats laden with intricately carved fruits, and the decorations using vegetables had to be seen to be believed. 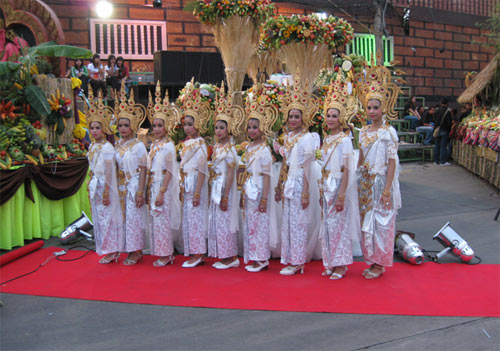 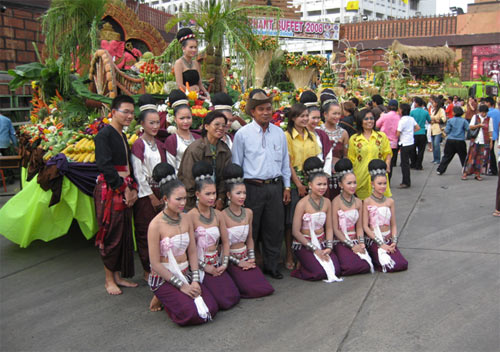 As with any celebration in Thailand, there are inevitably lots of pretty girls (and the occasional boy) in all sorts of extravagant costumes. Here there were some of the most amazing costumes seen anywhere I think, and a great variety. The only thing missing seemed to be the beauty contest – also very popular Thailand. 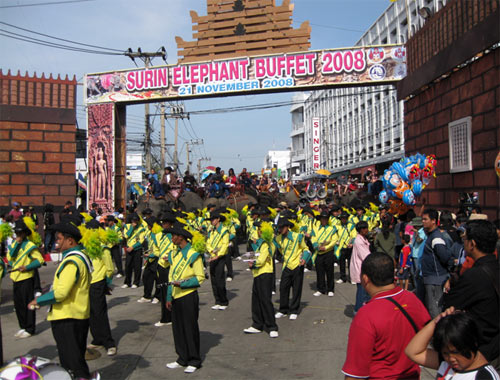 At about 9 AM the animals start to appear, some decorated, some not. Soon it's wall to wall elephants, and they have quite a presence! A bit of a lull for officials to make inevitable speeches, then off they go, it's a consumption extravaganza! What a sight! Don’t stand between the elephants and tables of food – you won’t last. The Thais know how to move in this situation and that is – fast – something you don’t see them doing too often. One old bull elephant got a bit agro with a tiered seating stand – the people on that moved REALLY fast.

It takes about 2 hours for the food to disappear – 60 tonnes was managed easily! And in the meantime some of it has been recycled already. You need to be careful where you step. There are lots of barrels of water along the way for elephants to drink from – they seem to think it's fun to suck up 50 litres of water and spray everything and everyone in sight! People have been consuming too – there are plenty of food stalls for a quick snack or a decent meal – nothing surprising there, get more than two people together in Thailand and at least three food stalls materialize pronto.

Something the Thais here love to do is to slip a cucumber or melon to a passing elephant. The elephants are willing – they can whip a proffered cucumber out of the hand without any change of gait and they can store 2 or 3 with the curl in the trunk and deliver them one by one to the mouth with a deftness to surprise. A pineapple will have the top removed, spat out and the fruit shoved in with equal sureness. Even elephants don’t have any truck with the rough end of a pineapple!

After all is consumed, elephants disperse, food stalls pack up, and street cleaners move in. People, brooms, shovels, baskets and trucks. Talk about shoveling shit! Soon all is clear – a bit after midday and there's not too much to show for it all. It’s a great spectacle! Get out there in 2009 – if you haven't seen it, you haven't seen it!

I Thought I Had A Good One

A Letter To My Ex-Wife