Take 3 parts Mardi Gras, add 2 parts of the half time show from the Super Bowl, add a dash of Las Vegas glitz along with some hoopla that would do P.T. Barnum proud, a cast of thousands and what do you have? Why Sports Day of course! What’s Sports
day? Why it’s probably the biggest event in any school here in Thailand. It sure is where I teach. It is such a big deal, that over the past month in preparing for it many classes were canceled. Classes? We don’t need no stinkin’
classes! Academics be damned! There was a spectacle to produce! So full speed ahead!

While nominally Sports Day is actually about sports, Track and Field to be specific, the actual athletic events are only part of what this is all about. That’s why very little of the preparation had anything to do with running or jumping,
and everything to do with marching, cheering, and costumes. It is school spirit pushed to the nth degree….and beyond, Thai style. That of course is what I love about it. There’s no doubt about it, when it comes to having a good time,
the Thais have it down pat. Lots of color, pretty girls, singing, dancing and of course plenty to eat and drink. Sports day certainly had all that, though of course since this was a school event, the drinks were non alcoholic. These kids though
didn’t need anything to “pump them up” other than their own youthful enthusiasm.

For weeks prior to Sports Day, in every corner of the campus, groups of students were practicing their cheers. The entire student body was divided into teams: Violet, Blue, Green, Yellow, Orange, Red and Pink. Each came up with their own
cheers, usually accompanied by the beating of drums, plus whistles, bells and anything else that could make noise. Each team had its own color coordinated uniform. Each built their own pavilion with names like Fairy Pink, New York Blue and Violet
Wonderland. Many of these kids might not show a hell of a lot of ambition in the classroom, but give them a bit of artwork to do and suddenly they’re all gung ho! They were all rushing around like busy bees. Then of course there was some
serious marching, twirling and choreographed dance moves to be practiced…and practiced…and practiced. If these kids devoted a small fraction of this kind of energy to practicing their schoolwork, I’d have nothing but scholars!

Finally everything was ready for the big day. Actually there were two big days. Mathiyom, grades 7-12 had their Sports Day on Friday. Prathom, grades 1-6 had their own on Saturday. Although the “cool season” has warmed up a
bit since it first began a few weeks ago, the skies were clear and a light breeze was blowing. It was the perfect morning for a parade. Apparently this parade is a big deal, and the streets are lined with spectators. Even though this particular
Sports Day is only for my school, marching bands from half a dozen other schools have been invited to participate in the opening parade. Marching bands are alive and well in Thailand…and they are damned good! Our school’s band, when they
are not marching, play as an orchestral ensemble. This year they competed in an international competition in Singapore, and placed very high in the standings. Alas, all of my pictures of the bands came out blurry, but let me share some shots that
give a pretty good feel of what the parade was like. 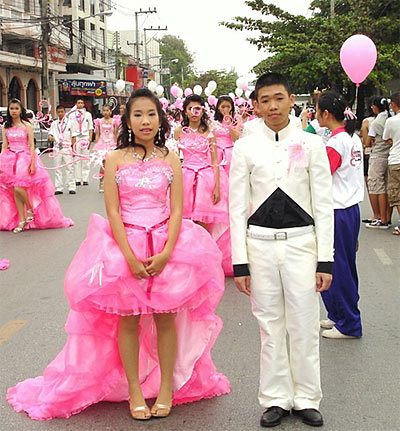 From what I understand, all of these costumes were custom made. No expense was spared, and the results speak for themselves. “Pretty in pink” I think you will agree. 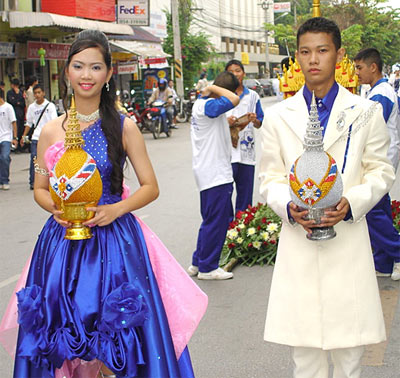 Here’s a handsome couple, although to be honest, the girls always seem to be more enthusiastic than the boys when it comes to getting “dolled up”. 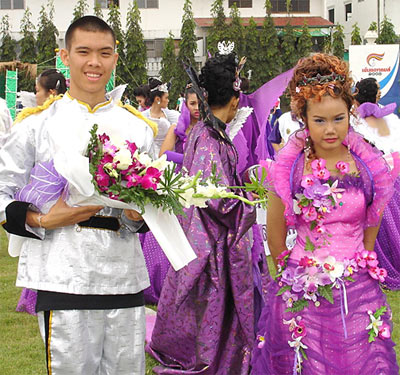 Here are some representatives of the violet contingent. 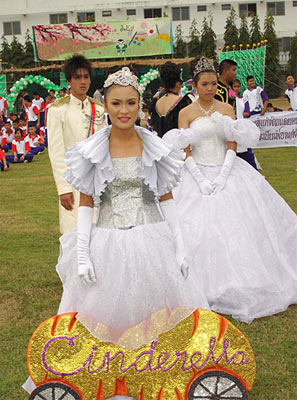 Cinderella and her “court”. 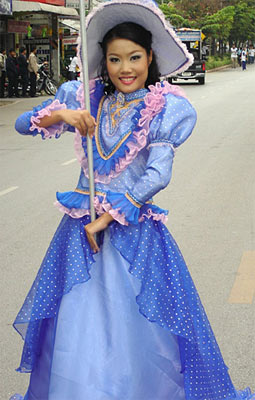 This sweetie in blue looks straight out of
“Little Bo-Peep”! 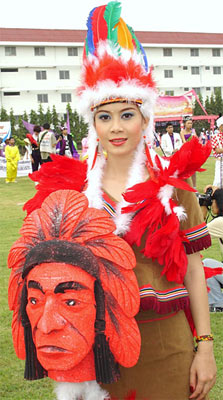 Only in Thailand could you be so “politically incorrect as to dress up as a “Red Indian” and get away with it. Oh well, I somehow don’t think there are a whole lot of Sioux here to protest, and well, she does look
cute! Here’s another few “red skins”. 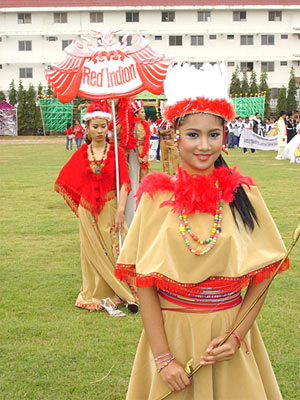 You have to love (or loath) this guy’s cape. 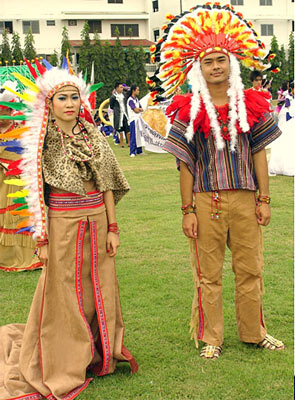 What’s a full tilt sporting event without an “Olympic style” flame. There was a big ceremony with a torch relay to light it.

As for the actual games…well they were pretty much what you’d expect at a track meet, except with a whole lot more cheering. Sorry I have no pictures, as I was shooting some video at that point. Although there was certainly a strong
competitive spirit on display, it was good natured. No “agony of defeat” was evident; just a lot of fun all around. Of course parents were on hand to watch their darlings strut their stuff. Obviously many of these parents were well
to do, given the expensive camera equipment on display. Heaven forbid that one golden moment of little Somsak or Somporn not be preserved for posterity! I guess parents are alike the world over. Being the only Farang teacher, I received a goodly
number of smiles and wais from the parents, and of course wild cheers from my students when I visited each team’s pavilion.

So all in all a good time was had by all. It was then time to clean up the playing field and the school grounds for The Pratom’s chance for glory the next day. They too had a wonderful parade. Here are some shots worth taking a look
at.

Again another fine day, with even more parents on hand. Again it was all lovely and everyone had a wonderful time. I hope you enjoyed this little Thai “slice of life”. It’s something that not many Farangs ever get to
see. It’s nice to actually be a part of my community and actually be a part of the ebb and flow of daily life. Monday it will be back to normal, or at least as normal as things ever are around here. But for these kids at least, this weekend
will be a memorable part of their lives. Ah the sporting life! How sweet it is!

A Walk In the Park