Chestnuts Roasting On an Open Wok

Since the Thais never dreamed up a holiday to celebrate the Winter Solstice, Christmas seems to do as well as any. They DO seem to like it. Hell, I'm sitting here writing this in the coffee shop across from the school listening to the Ronettes sing Sleigh Ride and "The Boss" belt out Santa Claus Is Coming to Town. Apparently the owner, who is a devout Buddhist, enjoys these tunes as much as I do. Speaking about Santa, as THE farang at our school, I have been "volunteered" into being Saint Nick for our upcoming Christmas party. Ho Ho Ho! Now that promises to be downright strange.

It's amazing, but at a school run by a Catholic order, I don't believe that a single student is a Christian. That of course hasn't stopped us from having a number of Christmas trees, a manger scene and enough garland and tinsel scattered about to decorate a small town. 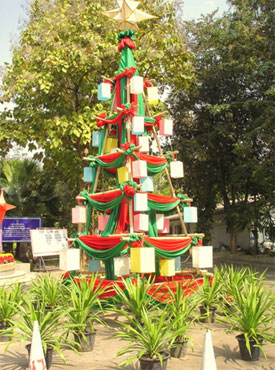 This is an attractive “abstract” Christmas tree 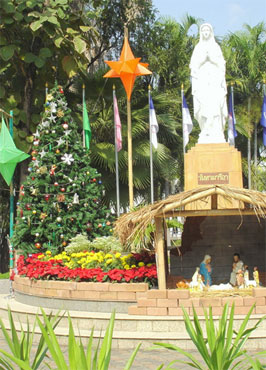 Here is a more traditional tree along with a Nativity scene and the Virgin Mary.

What the kids make of the whole Christmas story I can't even imagine, but then again all those statues of the Virgin Mary must make quite an impression since kids have taken a lot of time to decorate them with flowers. I suppose there isn’t that much difference when you come down to it between a run of the mill Thai ghost and one of the supposed “Holy” variety.

Last night there was a gala holiday concert where out symphonic band not only presented the traditional Christmas classics, but a damned fine rendition of Ode to Joy from Beethoven’s 9th. Occasionally the Thais not only “get” western music, but actually do it justice. 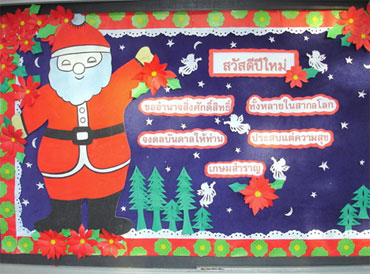 Christmas is one of those times when it feels a bit surrealistic being in Thailand. As a non-observant "Jew in the Lotus" I certainly don’t believe in the religious aspect of the holiday, still as kid growing up in America, it was impossible not to absorb the trappings into my psyche. As an adult I still love Christmas Carols, even the smaltzy ones. But to walk into Big C and see the place festooned with Christmas decorations and the cashiers sporting Santa hats, seems a bit strange. It does put people in a gift buying mood though. The carts are piled high with lots of goodies.

Oh well, time to just go with the flow. It is a pity though not to have a turkey dinner waiting for me on the table, or a mountain of snow for that matter! Trying out the new skis that Santa brought in the night is a long standing tradition in my neck of New England.

Today there were no classes at our school. Instead the kids are enjoying a day of fun and games…Thai style. Here are a few shots I took of the festivities. 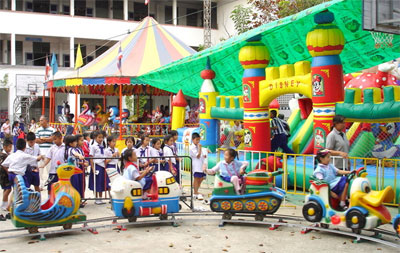 Yes it seems that the carnival has come to town, complete with a carousel and other assorted rides. The little ones are enjoying every minute of it all, which is exactly how it should be! 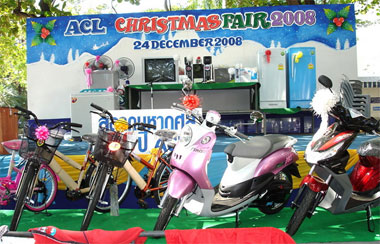 All of these goodies will be raffled off later today. The school actually forced all the teachers to buy 500 Baht worth of tickets. What is it about Catholics and gambling? In my hometown, Friday nights were every Bingo addicts dream. The box containing the raffle tickets looks pretty damned full. Needless to say, I won’t be going home with any of the prizes. I have absolutely no luck at games of chance. The only thing I recall winning was a case (a LARGE case) of Milky Ways at a Boys Club event. This was back in the 1950’s, when candy bars weren’t the dinky things they’ve devolved into today. You won’t be surprised to learn that I haven’t eaten a Milky Way since then! 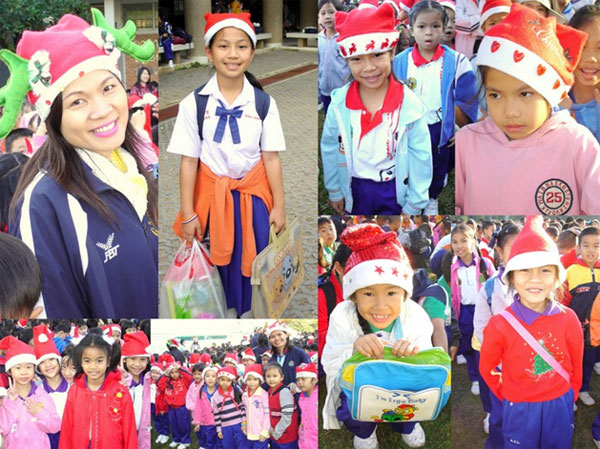 Santa had plenty of helpers on hand, both large and small today. What is there about a Santa Claus hat that makes you smile? Whatever it is, I was a smiling fool all day long.

How cute can you get? In the background you can see my office. The English Only sign is of course a joke. The idea is to “encourage” the non native English speaking teachers to practice their English. The reality is that the Thai teachers speak Thai, the Filipino teachers speak Talalog, and the Chinese teachers speak Chinese. I suppose it’s up to me to bear the standard of the English language. The other teachers do actually consult me quite often on English usage.

It’s just after 4:00 PM on Christmas Eve. In a few more hours Santa should be hitching up the reindeer and heading out for his annual flight. I wonder if he will have any problems over Bangkok since he is wearing red. Naw! Even the PAD whackos wouldn’t dare take a pot shot at Santa!

Oh, regarding the chestnuts mentioned in the title of this piece; I recently was in Chiang Rai and there were vendors selling chestnuts on the street! They were roasting them in large woks full of small stones, and they were delicious!

With the Thais it is a case if any excuse for a party. Despite all of the Christmas paintings and decorations they have made up I wonder if they actually know much about it?! Hehehe…!

Sex Is All We Have Left To Sell