A Brief Depiction of Nakhon Nowhere

Having been prevented by the PAD from enjoying our much anticipated holiday in Europe, my wife and I took the opportunity to visit our country estate in deepest Isarn. We have a house there, and various bits of land scattered around. On one area of land we are growing around 2000 eucalyptus trees to sell in due course for making paper. A couple of other areas are loaned out to my wife’s sister to grow rice. Nearly everyone in one large corner of my wife’s village is related, and most of the others she has known all her life. We can take a stroll around the village and she’ll know someone at every other house. You can’t say that in the Big Mango, can you. We’ve lived in the same house in Bangkok for around nine years and have never, ever, met the neighbours on either side of us. They’ve made no effort to meet us and we’ve made no effort to meet them. Wife has no interest in them.

The house we have in the country is just a couple of kilometres up the road from her village and belonged to a family friend, but he moved to Chonburi where his wife is from and the house was little used for nearly 10 years. We saw it when we were up there for a family wedding and I decided to buy it to give spouse a bit of face and with the idea of using it as a future home. Cost 600,000 baht, about half the price of a beach hut in some parts of the UK. The sister of the previous owner used to look after it as she tended to the pigs she kept out the back. The remnants of the sty are still there and the concrete base is good for burning rubbish on. The place is basic inside, with bare concrete walls and a concrete floor but with a wooden floor upstairs, and one of the reasons to visit now was to get a builder to have a look and decide if the plans I have for it are practical. Mostly, they are. I intend this to be my retirement base in the not too distant future. It stands on a little over one rai of land, and has nice views. The builder is a relative, and I was able to look at a house he has built for his recently married daughter. What really impressed me was that the wiring was actually hidden inside the walls instead of running down the outside as is so often the case here. A small thing, but I really hate wires running down the walls. And factory-style fluorescent lighting that so many houses have here. Nasty. He’s built lights into the moulded ceiling. Classy job. His new son-in-law is an electrician and helped in the building. We’ll use them, and as family we know they’ll do a decent job and we won’t be ripped off. That is huge here, as any foreign residents will know.

At the front of the house is a two-lane highway linking the district centre of Somdet with Mukdahan, where eventually I will have to go to make visa trips across the river to Laos because that is the only way the Thai government will allow me to live with my wife. Everyone I speak to overseas is always incredulous that I (we) have to live in that situation, but that’s the way it is. Anyway, this two-lane road is quite busy with heavy lorries delivering cassava to a factory some way down the road and out of sight, and a quite frequent bus service that runs between Khon Kaen and Mukdahan. I love that I can walk out the house and just wave and the bus stops, and I can get off right outside my door. Cool. This road is therefore quite convenient, but noisy, and I think double glazing might be needed at the front. The air is clean and fresh, of course, being in the middle of not much, although very occasionally a smell comes over from the factory if the wind is in the wrong direction. I’ve smelt it from elsewhere and it’s kind of sweet but not too bad, and I’ll be able to live with that. It’s a lot better than the putrid odour we all have to suffer from the drains and klongs in Bangkok.

The nearest town of any kind is Somdet, eight kilometres up the road. That is around 40 kilometres from Kalasin, which is quite a large town with a small but modern shopping mall imaginatively named Kalasin Mall. Nothing much else to speak of. Saw a few farangs around there though. The nearest city is Khon Kaen, a further 80 kilometres away. That is the airport I’d need to use, 130 kilometres from home. Which is part of the reason I’m not living there already. KK, or the slightly closer Mukdahan, is where I would need to go to visit Tesco Lotus, which isn’t exactly convenient but the roads are excellent and the traffic generally light.

That’s the background. Now the depiction part, of Somdet, Nakhon Nowhere. It’s part of Kalasin Province, and is an administrative centre for nearly 100 villages in the area. The place isn’t much, with no major supermarkets or cinemas or anything like that. There are a few cheap restaurants, a couple of noodle places, a 7-11, a small Home Pro place that sells home improvement stuff, and a covered market. There’s also a small hotel, which I’ve stayed in a couple of times. I think I had a suite because it contained a couch which was actually softer than the bed. The hotel contains the only entertainment place that I am aware of, a small karaoke bar. I think the young locals show up there for a bit of naughty. I was sitting outside there once and a few pairs showed up on motorcycles, but once they saw me they drove off again, scared at seeing a strange farang there. 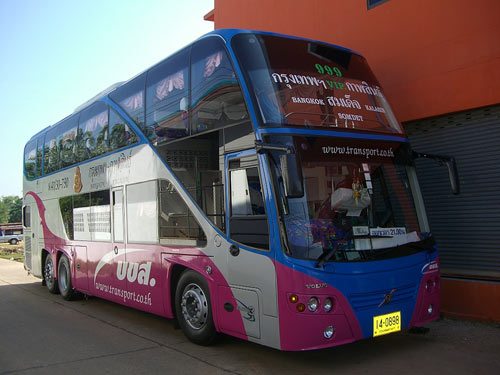 First, the VIP bus that conveyed us from Bangkok. It is a little curious that it goes beyond Kalasin to Somdet, because there are few passengers that make the final stage to what after all is a very small town, little more than a crossroads. It’s a bit like a railway branch line. 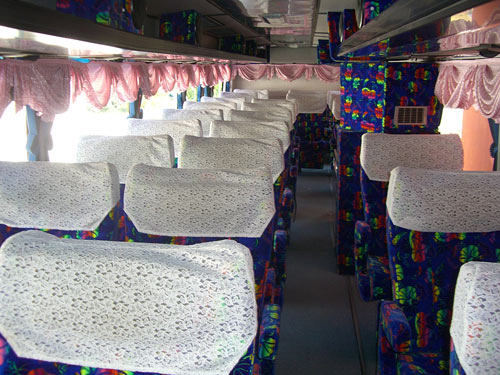 The inside of the bus. The seats are wide and comfortable, and blankets are provided, hygienically sealed in plastic. On the return we were also given a neck rest like some people use on planes. We stop off for 15-20 minutes along the way for refreshments and can use an included-in-the-fare 25 baht voucher to make purchases. The fare for the eight hour journey is currently 680 baht each way. 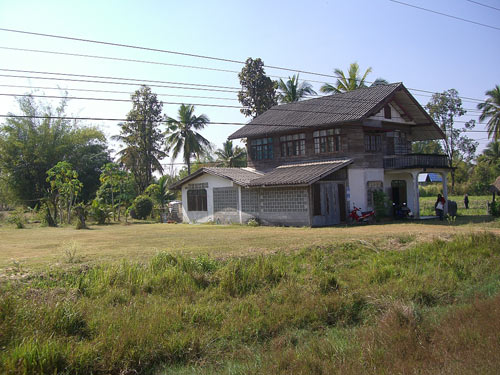 The Estate. Notice how the previous owner brilliantly hid the view of the garden by building a garage on the side of the house. That will be converted into a small room. The house will also be extended at the back, upstairs and down. 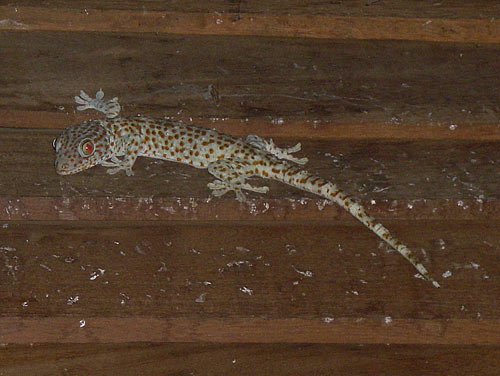 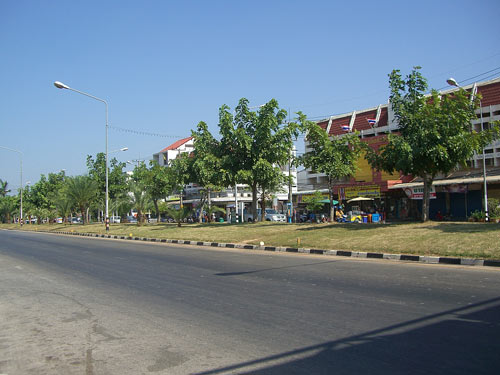 The main drag. Quite nice with the grass and trees down the centre. But none of the buildings are anything much. 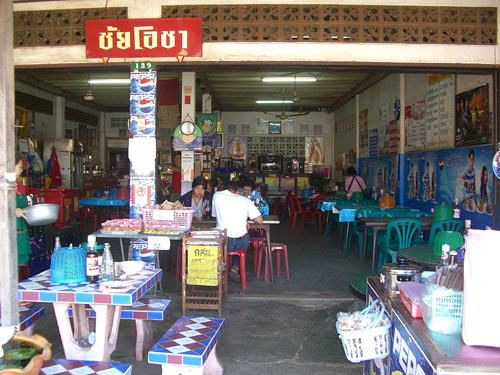 The noodle place, typical of countless thousands all over Thailand. It’s popular – when we arrived every inside table was taken. 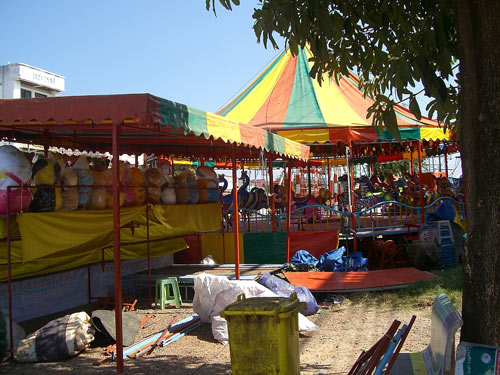 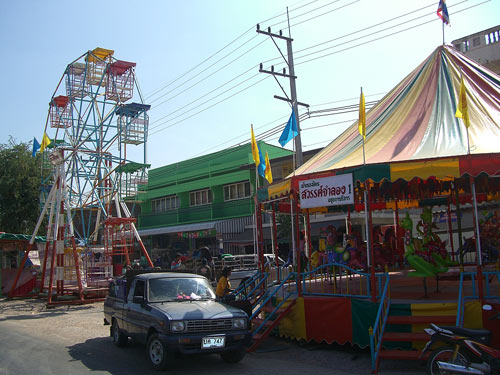 A small funfair was being set up beside the main road while we were there, with dodgem cars, a small train, ‘big’ wheels, carousels and various stalls with stuffed animals to win. 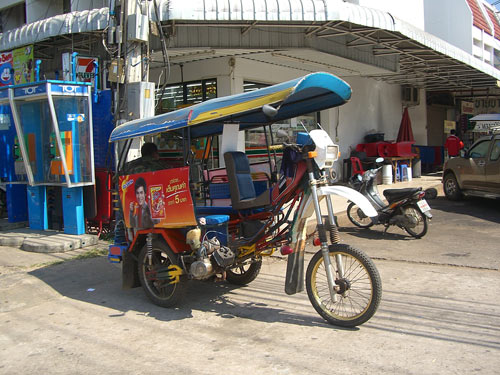 A local taxi, the equivalent of a Bangkok tuktuk. 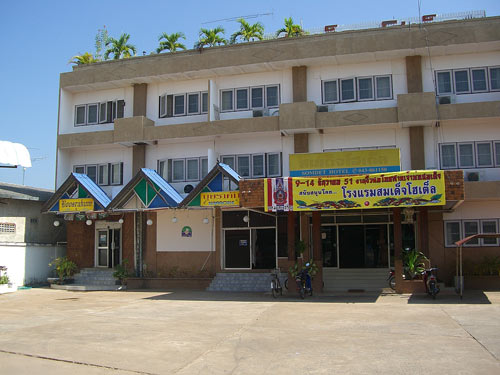 The social hub of the town, the Somdet Hotel. The karaoke place is on the left. Notice the roof garden. I don’t know it it’s accessible to guests, and doubt there’s a pool up there! 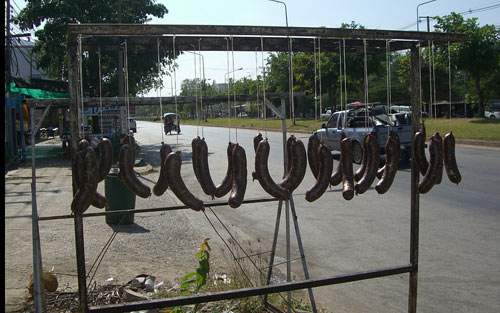 Not your average British banger. I have no idea what they taste like. Would you eat something left hanging in the sun? 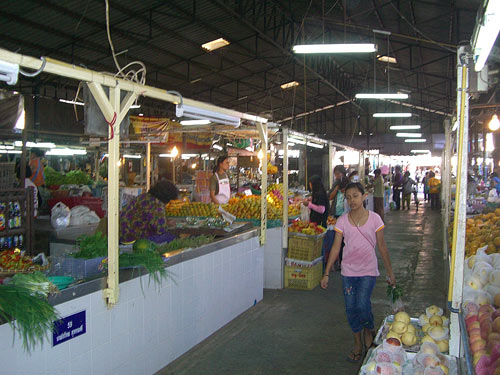 The indoor market, with fresh fruit… 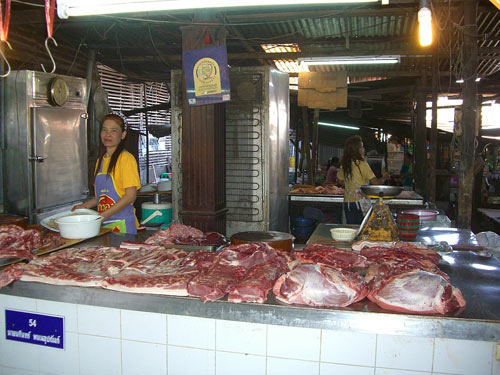 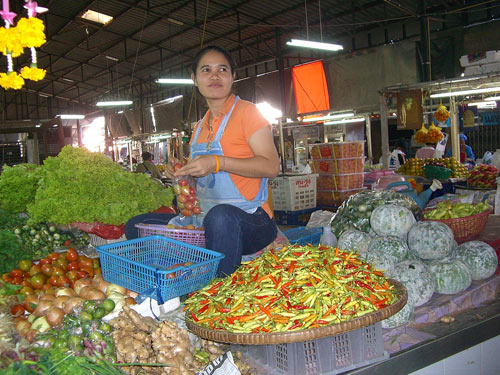 chillies and pumpkins and various vegetables… 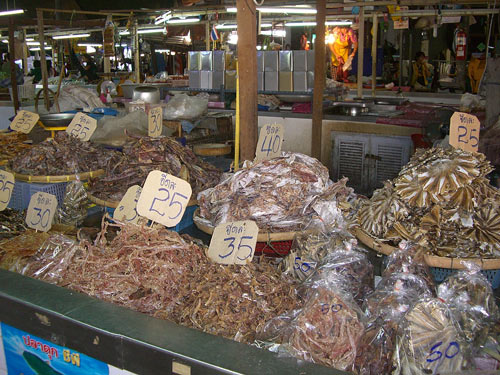 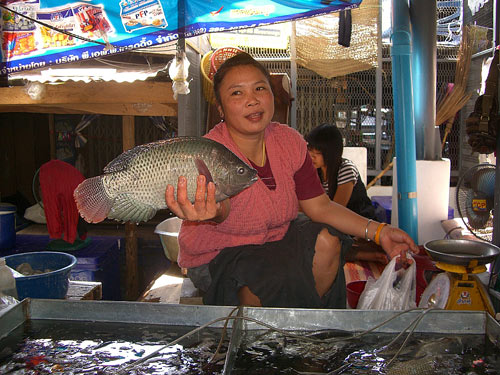 and fish so fresh they aren’t dead yet. 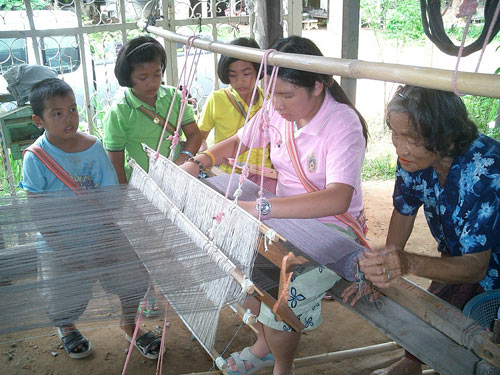 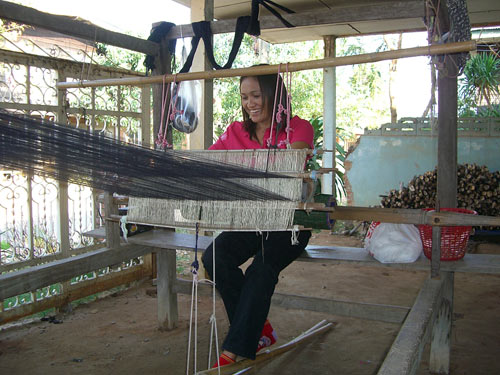 and a family member happy in her work. 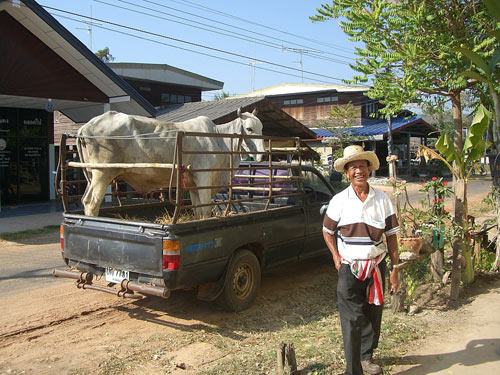 My wife’s uncle showed up with a cow he’d just bought.

I love being up there, and when I eventually have all the western comforts in the house life will be perfect. The people really are so friendly, with the smile in the final picture typical of the greeting you’ll find from almost everyone. Up there in Nakhon Nowhere, Thailand really still is the Land Of Smiles.

It looks like a pleasant sort of a place to curl up and die. OK, that is a bit harsh but I personally could not do it. The lack of other Westerners to converse with and interact with would be too much for me. The Internet is all very good and well but there is no substitute for real life conversation with your peers.

It looks pleasant and all that and sure, the people are wonderful, I bet, but don't you think it might be a little too quiet? And what will Barry do if he gets a little frisky one night?!

Anyway, so long as you are happy, that is what counts.

The Case Against The Craig Family