Why I Moved to Thailand! Part 1

This story starts late last year, I was in my mid forties, single and I guess I was at a crossroad in my life, thinking about the past and wondering if the future would be any better, realizing that if I didn’t do something drastic that I’d
be living a dull life for the rest of my life.

But how do you change your life when you don’t have much money?

Well my luck changed in December 2007 when an Australian company offered me an all expenses paid trip to Thailand to do some research for them.

So in January 2008 I came to Thailand on assignment for two weeks and traveled to many parts of this wonderful country.

Now before I tell you about Thailand, let me tell you that I have traveled a far bit in my own country but one thing I have always done is not read too much about what people say about the place, that way I don’t have any pre-conceived idea about
where I am traveling to. So off to Thailand I go, only knowing where it was on a world map and that it is hot all year round!

I was given two weeks to do all the work I had to do and this would mean long days and not much time for myself. In those two weeks I traveled to many places in Thailand.

I started my trip in Bangkok then flew to Udon Thani where I hired a tour guide named Tan and traveled through many of the smaller villages around this town and up to Nongkhai which is on the border with Laos. We then drove to Phitsanulok, stayed for
a day in Sukhothai to visit the Lost City and then onto Chiang Mai. I can tell you the roads there are much rougher then where I live and by the time we got to Chiang Mai my body had had enough, thankfully my guide told me he knew just what was
needed! A good massage! I quickly told him I didn’t go to massage parlors and he told me to trust him! (Sure! I’ve heard that one before and got burnt!), but I decide to trust him. So he makes a phone call and we’re
soon stopped in front of a small shop just outside the city. We get out of the van and out comes two lovely Thai ladies and tell me their going to make the pain go away. I look back at Tan who’s got a grin from ear to ear and he says, Trust
me! So into the shop I go and 2 hours later come out having experienced my first Thai massage, feeling great and I have a smile on my face. I get back into the van and tell Tan that these two ladies certainly know how to give a good massage (one did my legs & the other worked on my back).

Now he still had this big smile on his face and I ask him why he’s smiling. Tan just shrugs and says nothing. Tip now is also smiling and I know something’s up so I tell them please tell me, so Tip finally tells me theat Tan’s younger
sisters and are looking for a farang (white man) husband! And they told Tan that I was handsome! (I’m not by the way, just an average bloke with a big nose.) 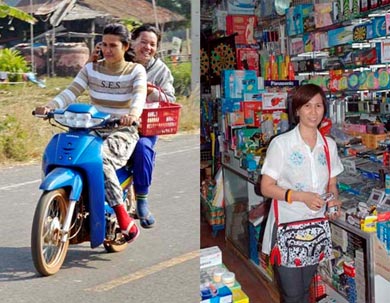 It was late by the time we checked in at the hotel so we showered and then went out to the night markets for dinner for some great local food, though I wish I could eat spicy food so that I could taste some of the great dishes I saw being served that
night, but was just stuck to fried rice and chicken with cashew nuts. The next day Tan drove to the Buhbing Palace and the Wat Phrathat Doi Suthep which are on the Doi Suthep Mountain, then back to Chiang Mai for the afternoon.

This by the way happened only about a week after Princess Galyani Vadhana had passed away and there was a real somber mode to these two places. The next day it was onto Chiang Rai and saw some beautiful temples and rode an elephant, then drove to the
Golden Triangle where I and took a speed boat along the Mekong River for ½ day. 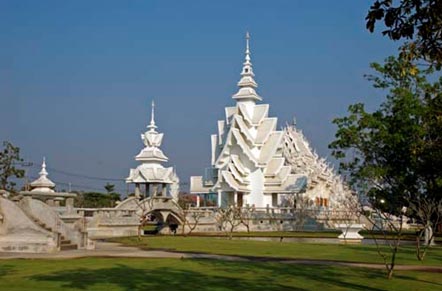 I also visited Laos for a day before coming back to Chiang Mai for a few days or R&R before flying back to Bangkok where I had to visit some of the major tourist attractions like; 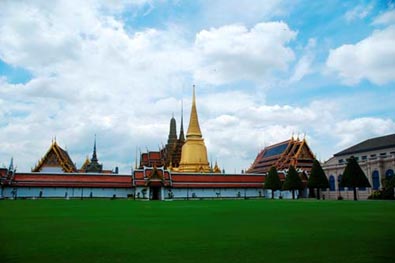 The Grand Palace, Temple of the Reclining Buddha, the Chatuchak Weekend Market and the Pratunam market.

In all I could say that I saw many different Thai people and experience many different aspect of Thai living from poor farmers to well off Thais and most were friendly and smiled a lot (not like where I came from). I can tell you
that the people from the north are much friendlier than around Bangkok.

So by the end of my trip I realized that there was something here that I liked and wanted to experience it again but at a more leisurely pace so I made plans to come back in April for a month.

Now the one thing I am not into or interested in is the nightlife (gogo bars and what goes on there) but I don’t begrudge anybody that does. My fondness for Thailand was the people & the culture. Now I’m not saying that
I’m not fond of the ladies but paying for it isn’t my cup of tea.

So when I went back to my country and finished my assignment for this company and while waiting for April to come round I started taking a good hard look at my life and soon realized that here I was stuck in a dead end job and no real prospect of achieving
much in the near future, so I started making plans for my future.

I made up my mind that if on my April trip to Thailand I liked it as before and was able to find employment then I’d take the plunge and move there.

Now during my January trip I’d met a young Thai woman who was training to be a tour guide & was working with the tour guide that I’d hired. Tip was a fun loving girl and once she got to know me liked to have a laugh and
joke around and I also learnt a bit about Thai culture from her. She was also studying for her English major at Chiang Mai University and was having lots of problem with her grammar (most Thais do as I’ve found out). I told Tip
that when I went home if she wanted I’d help her out with her English. All she had to do was write about her life and I’d correct her English mistakes. Now during the time I was back home we emailed about twice a week, her telling
me about what she was doing and me about my plans to come back. Now when Tip first started writing she would always finish her emails by apologizing about disturbing me. I kept telling her that she wasn’t disturbing me at all as I was the
one who had offered to help her! It took some time for her to realize that I was just doing this as a friend and she wasn’t disturbing me.

Now Tip knew that I was single and while traveling with me she’d often joke about some of the nice Thai women that we’d see and tell me that maybe this one or that one would make a good girlfriend! So when I was back home she
would sometimes joke with me about some of the nice women that she’d seen. By the way we were and still are very good friends but she’s 23 and I’m in my mid forties so the age gap is just too big. Now about two weeks before
I was due to arrive in Bangkok Tip emailed me and told me that while waiting for friends to arrive from Bangkok at Chiang Mai airport she’d been looking at some of the photos I’d sent her from my trip and there’d been a Thai
woman seated beside her & she wanted to know who’d taken these photos as there were some of her friends in the photos, (Thais as I’ve found out are real sticky beaks) and Tip told her that she’d meet someone from
overseas while he was in Thailand and he’s been helping her with her English. She asked Tip if she could have a copy of these photos and Tip told her no problem! All Amm (Thai woman’s name) had to do was email me and ask
me! Well we all know how shy most Thai women are and she asked Tip if she’d email me and ask me to send the photos to her.

So when Tip emailed me about this I thought she was again joking with me like all the other times has this woman was very good looking (she’d taken a photo of her with her mobile phone) and attached it to the email. Tip told me
she wasn’t joking this time and it was all true, so I emailed the photos and a few days later I received an email from Amm thanking me for the photos. I told her that wasn’t a problem and I was glad to help. Apparently Tip had told
her that I was coming back in April for a real holiday and to learn more about Thailand & its culture and Amm wanted to known why I was so interested in her country. I told Amm that I was very interested in Thailand culture as it was so different
to what I’d grown up with and was planning to move over if I found work. Amm told me that there was a huge festival in April called the Songkran Festival and if I wanted to see Thai culture then this would be something I’d want to
see! (How right she was!)

So I changed my flight dates to be here for this festival and while waiting to come over we started to email each other more and more and started to talk to each other through MSN messenger. We soon found there were many things we had in common, like
bush walking, visiting national parks and enjoying the outdoors (hard to imagine a good looking Thai women wanting to go walking in the forest for hours). She also didn’t like going out to clubs or partying.

Amm had graduated from Thammasat University and was now working for the health department for the government.

Now one thing I had found out from Tip was that some Thai women were very quick to profess their love for you and start asking for money and she’d warned me that if Amm started this that it was not a good thing. At no time did this happen and in
fact the opposite happen, Amm told me if I was wanting a good time with a woman then she wasn’t interested and for the time being was only looking for friendship and we’d see how things turned out.

So April rocks around and off to Thailand I go, this time just to enjoy myself, see more of this country and also to meet Amm and try to see Tip in Chiang Mai.