Yesterday was indeed the night of the full moon, and everyone was singing this little song, though of course in Thai. But even having heard it thousands of times; it still has a special place in my heart. I’ve certainly been known to be critical
of many things here in the Land of Smiles, but when it comes to the Loy Krathong Festival, I’ve nothing but wonderful things to say. Here is a moment for Thai culture to shine. This traditional celebration showcases the best of what Thailand
is all about, especially here in Lampang. Here, as elsewhere in the North, Loy Krathong takes on the style of Lanna culture and does it with elegance and flair. When it comes to decorating glitz, the Thais are in their element. For me, it’s
like Christmas, New Year’s Eve and Valentines Day all rolled into one. So let me give you a glimpse into how Loy Krathong unfolded last night.

Yesterday morning dawned sunny and crisp, with promise of a perfect night to come. Thank goodness the “cool season” had arrived! Although Loy Krathong is not celebrated until after the sun goes down, here at my school the festivities
started in the afternoon. I’ve been on kindergarten duty this week, so I was there to accompany the little ones as they marched carrying their krathongs to the school’s “klongs”. These mini canals
wind their way around under the trees and are home to a large population of assorted fish. Hundreds of five year old boys and girls were singing their little hearts out, in every key and tempo imaginable, but to me at least, it sounded just fine!
Some of my fellow teachers were beating drums, tamborines and clanging small cymbals which added their own special rhythm. If you are reading this from some far corner of Farangland, and haven’t a clue what a krathong is, let me
say that it is a small “boat” made traditionally with banana leaves, holding flowers, a candle and incense. They can be simple or elaborate.

As it wouldn’t be wise to have small children attempting to launch their krathongs into the water, I was drafted as the admiral in charge of setting them afloat once the candles and incense had been lit. Let me tell you, if
you are suffering under a cloud of malaise, a gaggle of happy children and a sea of floating flowers may just be what the doctor ordered! It certainly made me feel good! And oh, if you are wondering what the Loy Krathong song sounds like, here
is a link to a web page where you can hear it.

The weather last night was as perfect as you could have hoped for. The air had just a hint of what I think of as autumn. (Pleasantly warm for me…too cool for many Thais!) The moon was pale silver in a cloudless sky. The sky was ablaze not
only with stars, but thousands of kome-fai or what I refer to as “floating lanterns”. I can honestly say that this is the singular most spectacular thing I have ever witnessed, not only in Thailand, but anywhere I have ever
been! Unfortunately my puny point-and-shoot Sony is incapable of capturing more than a dull blur. Here is a link which shows you a short video of hundreds of these being released.

The first order of the evening was to go down to the Wang River and release our krathongs. Again, due to poor light and my inadequate camera, I’ve no pictures of my own to share. One of these days I may have to actually invest
in a real camera! All along the river, were illuminated floats adding their special quality to the overall scene.

Thousands of people were gathered along the shores, which thankfully had wide steps constructed to make access to the water easier. So here we are under the full moon, and the skies are filled with thousands of soft glowing orbs. Colorful
krathongs, candles ablaze and incense wafting from them are lazily drifting in the placid waters. Music fills the air and smiles and laughter abound. I can hardly think of a more romantic setting. It’s no surprise then that more
young folks will be heading off to some secluded spot to “pitch some woo” than any other night of the year. Many girls undoubtedly will disregard a stern lecture from earlier in the day about staying chaste. Oh well, blame it on
the moon!

So, krathongs duly dispatched downstream, it was time to take in a parade. There at least several dozen floats in this year’s extravaganza, along with marching bands, and a cast of thousands of boys, girls, men and woman,
all decked out in traditional Lanna finery. Here are a few pictures. 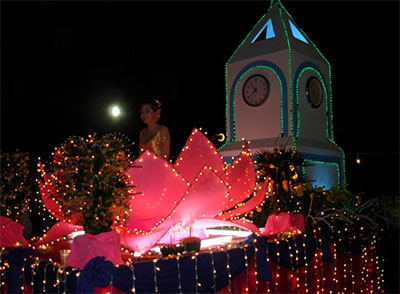 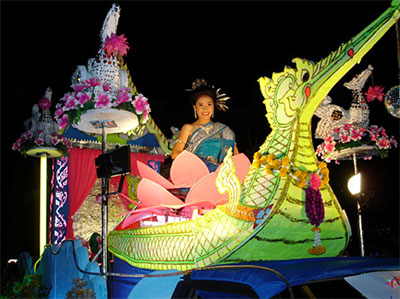 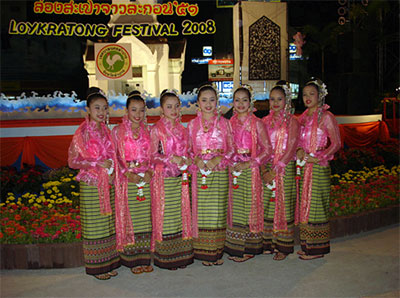 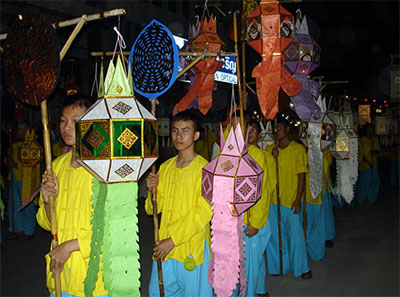 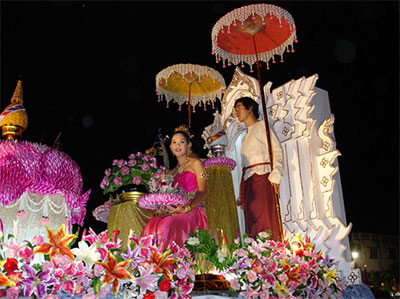 The parade went on into the night, and no one was in any hurry to go home. There were many concerts at a variety of venues around town, in addition to dance performances. As typical for any social event, food vendors were doing a booming business. This
being Thailand, people were also drinking a wee bit, but nothing like what happens during Songkran. People seemed to be content with a light buzz, or just being “high” on the evening’s “vibe”. I know I didn’t
need to imbibe anything alcoholic to get in the right frame of mind! If I had been a few decades younger…and if the next morning’s work day wasn’t looming at 5:00 AM, I would have stayed out much later. But, in any case I went
to sleep with the distant roar of fireworks above the city and dreamt sweet dreams of fiery balloons drift up into the heavens.

I really wish I could have made it up to the north to enjoy it with you. It's a wonderful festival and enjoying it in the North is so much better than in Bangkok.

"I No Speak English"