“We would like you to teach Kindergarten next week” the head of the English department informed me last Monday. Okaaaaay. “Is there any particular reason you would like me to” I inquired? Apparently The Powers
That Be decided that having a native speaker for five year olds was of critical importance. Well, I don’t know how urgent it really was, but I was more than ready to have a break from my “darling scholars” in Mattayom 3, 4,
and 5 (That’s the equivalent of grades 7-9). Actually I believe in the importance of early childhood education, so it wasn’t hard to get up some enthusiasm for this project; and the truth be told, I actually enjoy the company of
children. Not everyone, especially men do. I happen to find their wide eyed openness refreshing, especially after attempting to educate a bunch of often surly teenagers. (“Okay Khun White Guy…just try to make me learn something!”)

In an earlier submission, Innocence Not Yet Lost, I shared some of my thoughts on Thai children. As in any culture, the youngest Thai children represent an opportunity to hopefully create a better society. Yes, I know that in The Land of
Smiles that could be considered wishful thinking, but hey, you never know. So I agreed to give it a try. Here’s how it’s going so far.

The Kindergarten at my school is located in a lovely spot, with plenty of large shade trees, flowers, fountains and even a small waterfall. There is plenty of colorful, pint sized playground equipment, well constructed I might add. There
are seven classes that I’ve been teaching. These consist of five year olds. There are many other classes of nursery school located here as well. Hopefully my little boy will be starting here next year once he turns three. The classrooms
are pretty much what you would expect to find in any Kindergarten back in Farangland. They are colorful, warm and inviting places. There are lots of nice pictures along every wall and fun things to learn about. Learning and fun are of course the
operative words here.

Children naturally want to know everything, and schools have to work damned hard to repress the curiosity that is hard-wired into their young minds. In the past, I’ve been a pretty harsh critic of Thai schools, but I have to admit
that the Kindergarten teachers are doing one hell of a fine job here! They are an extremely dedicated and competent group of educators…..and I don’t use that that term lightly. Anyone who thinks that working with a group of five year
olds is easy should try sometime!

Kindergarten is a fragile transition time from being home with mom, to becoming a member of a larger society. In addition to learning the rudiments of the “3 R’s” (reading, ‘riting and ‘rithmatic) boys and
girls are beginning to interact in a cooperative way with their peers and the rest of the world. From what I’ve been able to observe so far, these little guys are off to a pretty good start in both areas. First of all, the teachers are
absolutely perfect in being surrogate moms. They are gentle and nurturing, but are capable of discipline when called for. Children do need to learn codes of proper behavior, whether back in Farangland or here in Thailand. Secondly the curriculum
is at once fun and stimulating. Quite a lot of important material is covered in small doses, often using songs, games and even dancing. I sincerely believe that “well done is half done”, especially when it comes to education. If
young children can experience the joy of discovery and learning as its own reward, and given the right intellectual “tools”, then you are well on the way to producing self motivated students.

Okay, that’s enough intellectualizing for the moment. I know you’re just dying to know how I have been doing. Amazingly, these tykes, most of whom have never seen a Farang in their lives know quite a bit of English. I would
have to credit that to their Thai teachers. While obviously I need the help of my Thai partners to teach, these children seem to pick up on things pretty quickly. Oh to have a young fresh mind again! These guys soak up things like a sponge.

They had been studying insects, and so I needed to come up with some 20 minute lessons which would neither bore them to tears nor leave them bewildered. Obviously the K.I.S.S. principle was needed here. In other words, Keep It Simple Stupid.
Luckily I had just the right material at hand. When we moved to Thailand I brought thousands of books with me. (I think I filled half our shipping container with books) Among these were a fair number of children’s books. Now in addition
to being a part of my little Sam’s legacy, they would serve me well in the classroom.

First up in my hit parade of classics was The Very Busy Spider by Eric Carle. 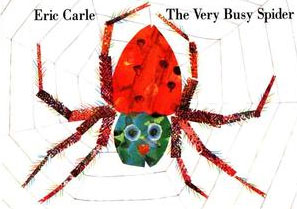 I’m sure a dad or two out there in cyberspace has read that a time or two to his little ones. The children adored the story, with its colorful illustrations. I needed something more active to supplement the story, so it was time to sing the Itsy
Bitsy Spider song. (Yes, I know that some folks say Itsy Wincy) To my astonishment, the children already knew that song…..in Thai! So it wasn’t hard for them to learn the English version since the melody is the same. We rounded out the
lesson with a few classroom commands: sit in a line, stand in a circle etc. Then it was time to move on to the next classroom. Children have an intuitive sense of which adults actually like them, so I was pleased at my reception into their world.
I got lots of handshakes from the boys and hugs from the girls, with smiles all around. It is nice to be appreciated once in a while!

Today’s book was another spider story. (Spider is one of their vocabulary words fro the week) This time it was Miss Spider’s Tea Party by David Kirk. 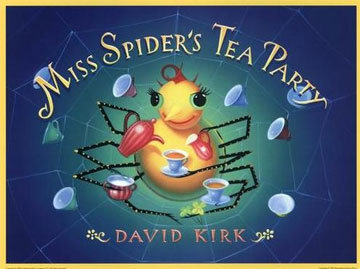 I’ve always liked this book, and back when I was a manager at Barnes & Noble we used to have children’s tea parties based on its theme. It’s in the form of a poem, which gives Thai children a chance to hear English spoken in a
rhythmic style. These kids were all giggles, especially as I tend to ham things up with funny voices. For a more physical activity I started teaching them The Ants go Marching. 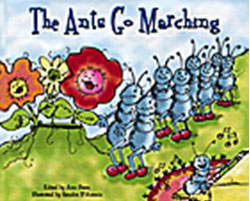 Anyone who was ever a Boy Scout might remember singing that little ditty while hiking over hill and dale. In any case, these boys and girls enjoyed marching around the classroom. For a Thai twist, I substituted the words Hurrah! Hurrah! with Chai-yo!
Chai-yo! Since the song has ten verses, we only got by to marching Three by Three. We’ll have to continue marching along tomorrow. What’s on tomorrow’s agenda? Why more insect fun with another Eric Carle classic, The Grouchy
Ladybug (or Ladybird if you hail from a Commonwealth country). 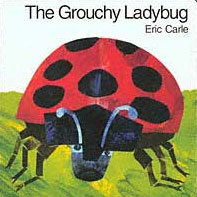 Even after only a few days here, I’m starting to feel at home in a place where the teachers actually enjoy having me around, and actually welcome fresh ideas. So far I’ve not encountered the Thai version of “Not Invented Here”.
Some of teachers have asked me to help them with their English. They in turn have offered to help me with my Thai. A good deal all around! I’m not looking forward all that much to my “regular” teaching duties. Who knows? Maybe
I’ll try to stick around a little longer. At 58 years old, going back to Kindergarten seems like a fine idea.

I personally could not imagine teaching kids so young and you have my utmost respect for making a decent go of it.

Becoming An Expat, and the Consequences