June 2008 here in Thailand was one hell of a month, to put it mildly. Thank goodness it’s over! I don’t think I can handle anymore upheavals for a while. As it is, I’ll be feeling the shockwaves from those 30 days for years to come. I’ve already related my two little “cardiac adventures” in detail, so there’s no need to talk about that roller-coaster ride. However those close encounters with the Grim Reaper did produce some major changes worth mentioning.

I am now riding my bicycle about 90% of the time as my primary means of transportation. The reasons are three fold.

First, although I was riding recreationally every day, I have definitely turned over a new leaf as far as my lifestyle is concerned. A more vigorous exercise is definitely a major part of my life. I’m feeling pretty damned good these days. Of course after spending over 500,000 baht to “retrofit” my heart, I would be pretty pissed off to not be feeling well! Hopefully after some time in the saddle I’ll drop the few extra pounds that I’ve been carrying around, and have more energy to boot!

The second reason for taking to two wheels is purely economic. Like all the rest of the world, my wife and I have been feeling the ever increasing “pain at the pump”. In the course of a month, without any major trips, we’ve been spending over 6,000 baht to fill up our Toyota Vigo. For some of you out there in Farangland (or some affluent ex-pats), that might not seem all that much money. For us however that represents a significant chunk of change. Having used up all of our reserves on last month’s hospital bills, finding ways to save money is not an option, it is a cold hard necessity. Now except for major shopping expeditions, or times when we need to take Sam with us, we are either on our motorcycle or bicycles. I should say that I am only a passenger on our Yamaha. I have no doubt that I would wind up killing myself driving a motorcycle. It’s not that I don’t know how to ride one, or that I ride recklessly, I simply do not have enough extra pairs of eyes in my head to keep from being taken out by your typical Thai motorist! It’s challenging enough to pedal my way around town unscathed. Forget about having the “right of way”! To a Thai that simple and straightforward phrase is warped into “I have the right to go wherever I please, whenever I please, so get the hell out of my way!” So far I have managed to avoid being wiped out. But I am almost considering having my bicycle blessed at a local temple, or getting an amulet to ward off disaster!

The third reason for bicycling is that I’ve been discovering all kinds of interesting places that I’d never seen before. In an effort to avoid going over a major bridge during rush hour, I started seeking out alternate, less crowded routes. The proverbial “road less travelled” has yielded some delightful surprises. I found this little pedestrian bridge crossing the Wang River. 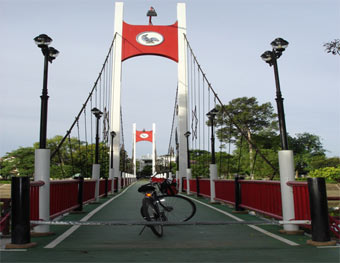 I am not the only cyclist who uses this bridge. It is a whole lot relaxing than battling the masses. 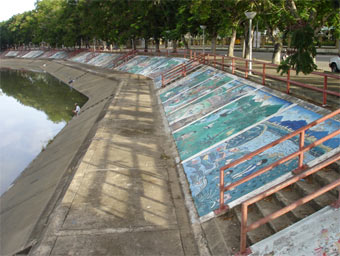 Along the side of the river are some cute murals painted by local children. During Loy Krathong, this area provides easy access to launch your krathong. On this morning one fellow was fishing. I don’t know if he caught anything, but he seemed content to relax there.

A few meters on the other side I stumbled on this unusual place. I have no idea what it represents, but it sure caught my eye, and the owner was more than friendly enough to a strange Farang on a bicycle. 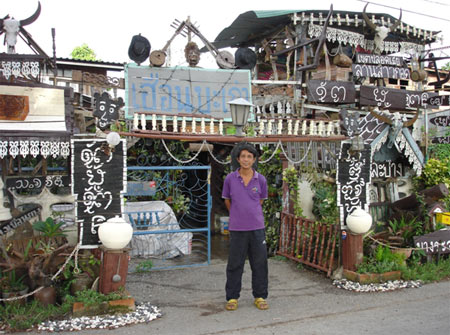 Running for about a half kilometer along the river is a wonderful park. It truly is a little gem. Quiet, nicely landscaped, and without a trace of litter! Here is a children’s playground that I will definitely be bringing Sam to. 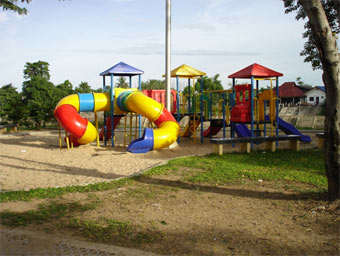 I thought I’d discovered all of Lampang’s many roosters, but here is another of the ubiquitous fowls. 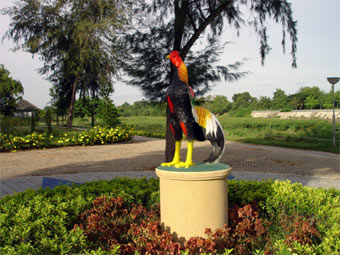 A little further down I found something I had never seen in any park, anywhere in the world. Here was some nicely made adult exercise equipment. There are quite a number of different apparatuses that you can’t see from this one picture. I definitely plan to try some of it out on the weekend. Once again, the Thais were very welcoming. 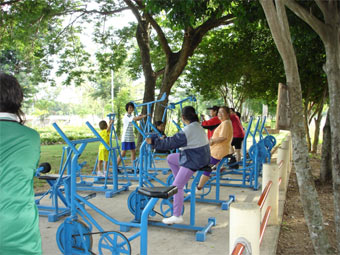 Late one afternoon I was treated to this spectacular rainbow, which unfortunately doesn’t seem all that spectacular with my little “point and shoot camera”. You’ll just have to take my word for it that it was. 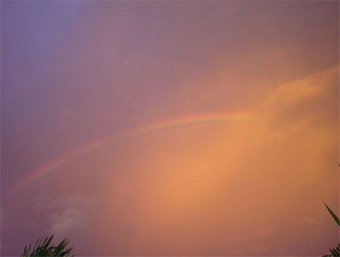 On a different road and on a less aesthetic note, here is what passes for a cemetery in these parts. I guess Thais aren’t much for ancestor worship. At least this lot isn’t. If there was such a thing as ghosts, and I were buried here, I would not be a happy camper! 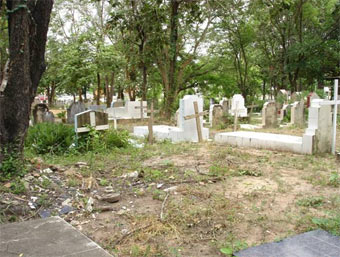 Aside from my recent illness, the other major change to come my way was a welcome change of employment. State tuned for School Daze Redux coming soon.

It is nice to see familiar Lampang in picture.