What’s Wrong With This Picture?

Anyone who’s lived in Thailand for any length of time knows that just when you think you’ve “seen it all” something comes along that makes your jaw drop and leaves you speechless. That’s what happened to me when I saw this sight across the street from my home. 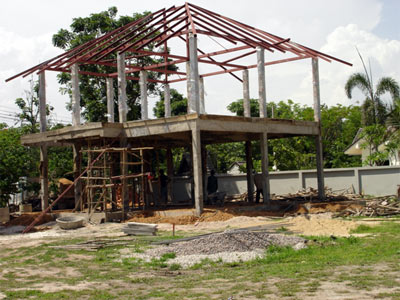 If you’re not familiar with construction in Thailand, this is a typical two-storey home. Most homes here are primarily built from reinforced concrete and brick. The roofs are steel covered with cement “tiles”. Having come from a country where most homes are wood framed, I was fascinated to watch our own home go up a few years ago. It would certainly seem that this is fairly “heavy duty” to build a residential building. Because of the high cost of wood and the year-round humidity, concrete makes sense price-wise and in terms of durability.

Of course the quality of construction varies tremendously in LOS. It can be a crap shoot sometimes whether you get a group of competent builders who actually know what you are doing, or a gaggle of idiots who are incapable of creating a level surface or plumb line.

My wife and I were extremely fortunate to find a group of builders who were not only A1 craftsmen, but who were as honest as the day is long. They were also truly jai dee and to this day remain close friends.

Before answering the burning question of “What’s Wrong With This Picture”, let me show you the proper method of construction. Step # 1 is to create columns. This is done by making “towers of rebar. The rebar we used in building our home exceeds in strength of what most people use. 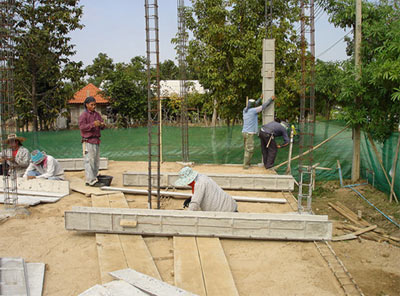 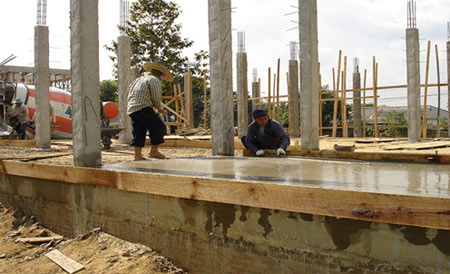 Here are some finished columns for my house.

Step #4: Build forms for the beams which connect the columns. These beams also contain a rebar structure, which is then filled with concrete.

In the next picture you can see the roof being constructed on to the. beams. The beams of course in addition to providing structural stability provide a proper place to support the weight of the roof. 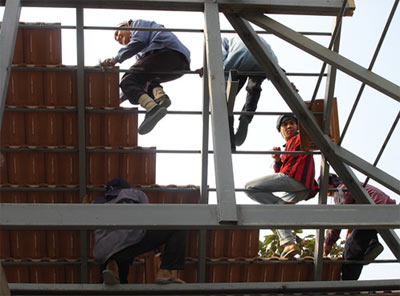 Here you can see tiles being anchored to the steel structure. For our home we used actual ceramic tiles. In addition to looking much more attractive than cement, they are also considerably lighter.

Eventually we ended up with a lovely, well built home that should last for many, many years. Regardless of whatever else may befall us here in Thailand, I am 100% confident that the roof will not come crashing down on us in the middle of the night!

As for my future neighbors across the street….I have zero confidence in their fate! Once again please take a close look at this picture and see if you can spot what’s wrong.

Did anyone spot what is missing? The answer? The second story beams! When I saw this I actually was speechless. What were these clowns thinking of? There is nothing holding the whole upper
half of the house together with any integrity! Even if the last bit of construction you did was as a child with an Erector set (Mechano to you Brits, Aussies and Kiwis), it doesn’t take a rocket scientist to know that you need to brace
a structure horizontally to keep it from wobbling! Even here in Thailand where I’d seen some fairly shabby workmanship, this was a first. Did these guys just wake up one day from a monumental drinking binge and somehow “forget”
that they needed to tie the upper section of the house together before beginning the roof?

The answer as to why they were doing what they were doing is sadly (and unfortunately all too typically) Thai. Okay get ready to head down the rabbit hole into an alternate way of thinking. First let me say that I know what I do third hand. She got it from a neighbor who was supposed “supervising” the construction for the owner. My wife claims that they decided not to put in the beams to “save money”. Save money for who? Somehow I don’t think for the poor owner, who had already paid the builders for a tidy sum. I’ve heard of corrupt builders who compromised quality while charging the full amount, but this was ridiculous, even for Thailand! The neighbor, who by the way is an engineer at the nearby Mae Mo power plant, was flabbergasted when he saw what was happening. But was the owner notified about the “house of cards” that was being built for her? This being Thailand, and Thais being Thais, the answer is of course not! This poor woman, not being all that familiar with how a house should be built, hasn’t a clue about these fools have done. She is in full mushroom mode, exactly where everyone wants her to be. But why you may ask would anyone want to keep this woman in the
dark about what is surely a life threatening situation?

This being Thailand, the answer is quite simple: face. Asians in general and Thais in particular are obsessed with not losing face. They would rather turn away without saying a word than risk potential embarrassment, and my tee rak is as bad as the rest of them! When I urged her to tell the owner that she really needed to have the builders immediately stop what they were doing and start again, she said emphatically NO WAY! Under NO circumstances was she going to say anything, even though even she knew the house was a potential death trap. For her the potential for unpleasantness far outweighed being a “Good Samaritan”. I really do think that you’d be hard pressed to find anyone in Los who would be willing to be one either. Just shut up, avert your eyes, keep an insincere smile on your face, and you may just make it through the day without any inconvenience.

Now every day I see said “death trap” and just shake my head in amazement. My wife and I are generally pretty laid back with each other, but I have actually forbidden her to ever take our son Sam into that house once it is “finished”. The only other thing I have forbidden her to do that I can recall (other than to give money to her family!) is to feed Sam insects. That may be my Western prejudice coming through, but there is no way in hell I want my little boy eating bugs! She is free to gorge on them herself if she has a mind to! I have no idea when this house will eventually collapse. It may be in a matter of months or it may be years, but I have no doubt that one day it will come tumbling down, and I don’t want my family neat it when it does! If anyone wants to give me odds on when “Tumbling Day” is go please let me know. In the meantime all I can do is say for the umpteenth thousand time, “Welcome to Thailand”!

OK, I admit it. I couldn't figure out what was wrong. I guess that is why I am not in construction!