Whether you are just visiting Thailand or actually live here, you must have seen this mysterious creature, most notably on Thai bank and insurance company buildings
. The 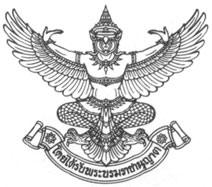 unmistakable figure adorns the façades of government ministries and all other official edifices. It appears on the royal sceptre and on the personnel flag
of His Majesty the King. Serving as both a royal and national symbol, you will find it as the official seal on Thai passports, personal identity cards and even bank books. It also appears on both sides of Thai banknotes and at the head of
government documents and official stationery.

So what exactly is this strange bird-like being? It is no less than the noble Garuda, the Solar Bird, a creature half-man and half-eagle. In the Thai language, he is known as a Krut. Like so many of characters of Theravada Buddhist mythology, the Garuda was adopted from the Hindu religious pantheon by way of the ancient Hindu-based Khmer kingdom (modern day Cambodia), which once held sway over much of the region. Ever since those long ago days, the Garuda has continued his brilliant career in Siam, Laos, Indonesia, Malaysia and the rest of Indian influenced Southeast Asia.

In India, the country of his origin, the Garuda is known above all as the mount (in Sanskrit, “wahana“, i.e. vehicle) of the god Vishnu and his consort Lakshmee. The Garuda’s appearance is considered both frightening and reassuring. The mere sight of him leaves no one unmoved and once cannot help but be fascinated by the obvious power he displays.

In the Hindu religious trinity, Brahma is the Creator, Shiva the Destroyer, and Vishnu the protector who periodically intercedes to restore the balance against the forces of evil by incarnating himself in different forms. This makes Vishnu well loved by the Hindu faithful. Vishnu is credited with about ten incarnations (Avatars), one of which some Hindus will try to tell you was the Buddha himself.

In Thailand and Cambodia, especially at Angkor, the ancient capital of the Khmer kings, the Garuda rightfully stands in all royally sponsored Buddhist temples. This is because according to ancient belief a king is the personification of Vishnu-Narayan, the benevolent god par excellence. A monarch is in fact a Devaraja — a ruler of divine origin who should govern with justice and mercy

According to some scholars, the Garuda may even be symbolised by the Cho-fa on the roofs of temple buildings. This characteristic element of Thai architecture clearly does resemble a Garuda in a highly styled form. However, not all scholars agree. Some claim the cho-fa could also represent the Nagas, mythological serpents and half-bothers of Garuda. At any rate, it is all in the same family!

Throughout Siamese history, the Garuda has figured in all artistic and literary fields, and his representation accordingly has evolved with the historical periods and styles. It is just natural to find him as a decorative element on the royal sedan chairs as it is on the king’s throne, not to mention those roof tops and gables in the royal residences.

Beginning in 1911, when the youthful western-educated Rama VI had succeeded his revered father King Chulalongkorn to the throne, it has been the custom to display the Maharaja banner above the royal apartments wherever the Thai monarch resides. This banner now consists of a square flag bearing a red Garuda against a yellow background. (Yellow is the colour traditionally associated with Monday, the day of birth of the present ruler, the beloved King Bhumibol Adulyadej, Rama IX, the longest reigning monarch in the world.) If His Majesty travels by motorcade, the Garuda standard flies at the head of the procession to let all know who is approaching. 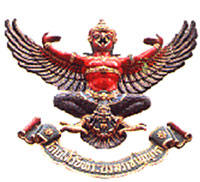 For deserving private companies which have been granted the right to adorn their façades with the Garuda, the impressive creature represents a highly sought after royal recognition. (Thus the Thai text Doi dai rap pra-borom-ratcha anu-yat, which appears on the banner.) It is indeed the king himself who must bestow this honour, and it is only granted to companies that have contributed to the progress of the nation, particularly in economic and social fields. For this reason, the Garuda’s appearance over a business cannot be taken lightly.

The half-eagle Garuda is also the name and the symbol of the Indonesian national airline, as well as an Indonesian national emblem. However, in Indonesia the Garuda has lost all of his human attributes. Interestingly enough, in heraldry the only animals which have retained their symbolism throughout the ages and in all countries are the eagle and the dragon. It is also worth noting that despite the Islamisation of most of Indonesia many centuries ago, the influence of Indian culture remains so strong that many Muslims there still bear names of Sanskrit origin, betraying their earlier Hinduism. And in neighbouring Malaysia, another strongly Muslim country, the Garuda also frequently appears in folklore. Thus even though religions may change, the imperial and imposing Garuda continues to retain his hold on men’s imagination. How many other mythological creatures can you say that about?