Apparently Songkran is not a time for innocent fun and celebration, at least in some parts of Thailand. In fact Stick recently described the holiday in Bangkok as sometimes “cruel”. Yikes! No wonder folks like to “head for the hills”
until it’s over

Here in my hometown of Lampang it’s a different story altogether. This is my third go round for Songkran, and all I can say is that it keeps getting better each year! The “serious” wet phase only lasts for two days. After that folks
who somehow aren’t wet enough already, or partied hard enough, head up to Chiang Mai. From what I’ve heard, things get just a little too crazy there for my tastes. Songkran in Lampang is blessed with the “Goldilocks Effect.”
Not too small, not too big, but just the right size. (at least for me)

If you really and truly want to stay dry, you easily can. My wife hasn’t gotten a drop of H2O on her in three years. Most of the water wars happen in the center of town. It’s not hard to simply detour around the deluge. If you’re
like me however, and really enjoy a good soaking, that can easily be arranged as well!

This year like the year before, I headed out on my bicycle. It’s a really easy way to get through some major traffic congestion, and if I need to, I can pick my bike up and park it on the sidewalk. This year I had a waterproof camera case, so I
was able to get some nice photographs that really capture the Songkran spirit, without fear of ruining my camera.

It’s about a 10 minute bike ride into town. It’s a good chance to warm up, or should I say cool down with an initial bucket or two of water. I should say that I dutifully stop for almost everyone. Who of course can resist “soaking
the farang.” I especially like stopping for the really young children. They get such a kick out of flinging some water my way. 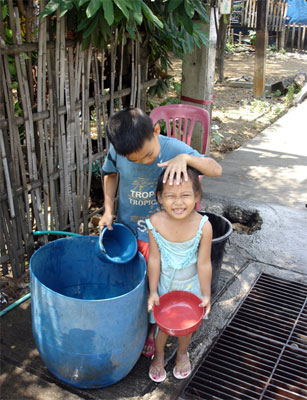 I think I really made this little girl’s day!

Moving along I take a side street that goes along the Wang River. It’s quite a lovely place with large shade trees and plenty of Thai style al fresco dining. Along the way I ran into these jolly young fellows who had obviously been partying for
hours already. 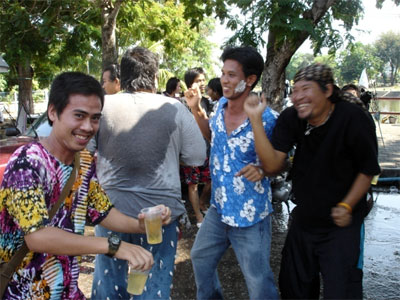 The guy carry the beer insisted that I raise a glass with them, and who am I to refuse such sincere hospitality. Chai Yo! This was the first of many (perhaps too many) glasses of booze that was implored to drink during the day. I am not normally that
much of a heavy drinker, but when the temperature is that hot, and everyone around you are having such a good time, I just say what the hell and get into the Songkran spirit. Perhaps I should say “spirits” because the massive amounts
of alcohol consumed during Songkran is legendary. Obviously no restriction on under aged drinking was being enforced, since I saw hundreds of kids who couldn’t be more than 14 or 15 enjoying a drink or two or ten. 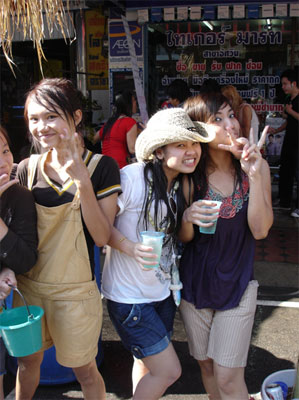 Oh what the hell! If nothing else, the booze certainly made these normally shy girls quite uninhibited. More than a few threw themselves at me saying “I love you!” (What were they drinking?) I have no doubt that some of these lovely ladies
would be losing their virginity that night! I wonder if any statistics have ever been done on the pregnancies started during Songkran. Somehow though, the combination of alcohol, loud bass thumping music and the general sentiment of “party
on” seem to put everyone in an amorous mood!

Eventually I cruise on into the epicenter of Water World. Let the games begin! As they say regarding sporting events, “you can’t tell the players without a score card.” So let me take a moment to profile the major participants. First
there are those lining the sidewalks with their “weapons of choice.” 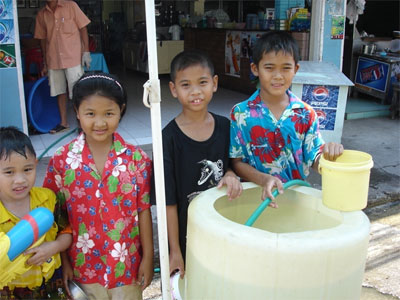 Squirt guns, super soakers, cups, buckets and hoses are all popular. Their victims are anyone walking, or riding by. I make it simple and stop graciously for my dousing. 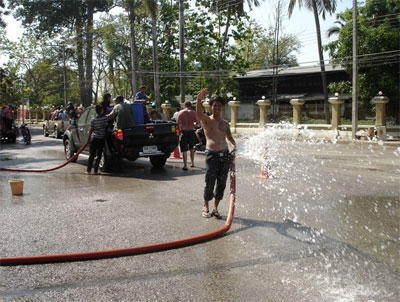 This guy wasn’t fooling around. He wanted to inflict some serious wetness! 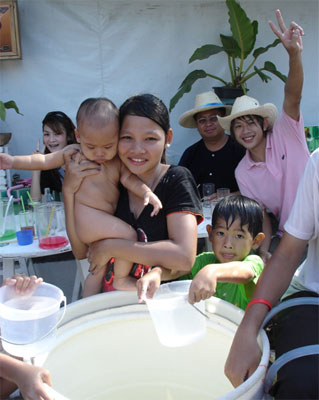 Unlike many who have loaded their water supplies with enormous blocks of ice, this water was warm enough even for this little baby to have a dunking.

The second main group of revelers is more mobile than sedentary. They are busy riding around in the back of pick-up trucks with a large water supply on hand. They enjoy soaking everyone; the folks on the sidewalks, pedestrians, motorcyclists and especially
other trucks! 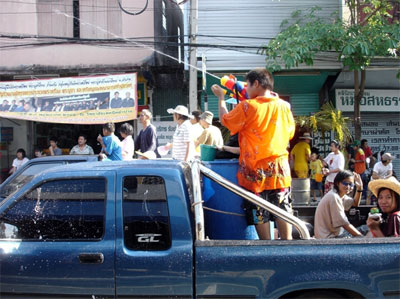 This guy is sort of a one man mobile artillery. 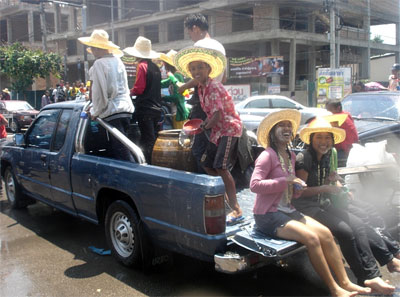 These folks were enjoying getting wet as much as soaking other folks.

Then of course there are the thousands who just out there to party. 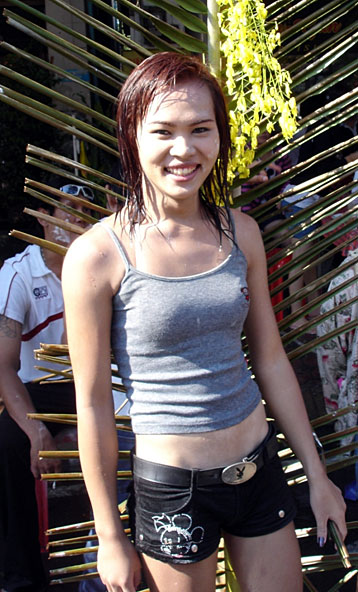 What can I say? This picture is worth a thousand words, then some! When else but during Songkran will you find hundreds and hundreds of pretty young girls smiling at you, not wearing much in the way of clothing, and what there is of it soaking wet! 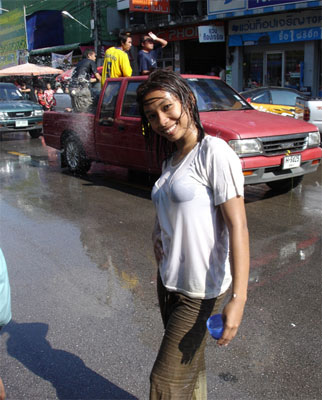 There were a number of folks belting out some tunes or dancing away in the streets. 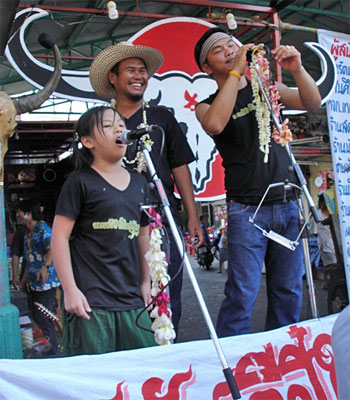 This young girl had a serious set of pipes! 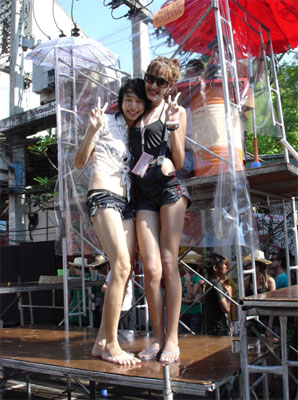 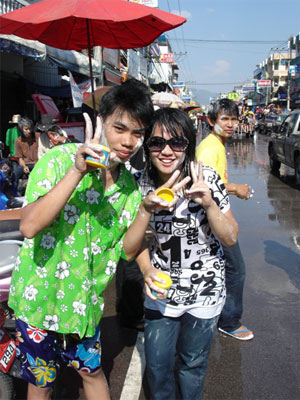 There are always people ready to “whiten” your complexion. Of course the next bucket of water washes it all off, but then you are ready for another application. I certainly have no objection to an attractive girl soothing my fevered brow! 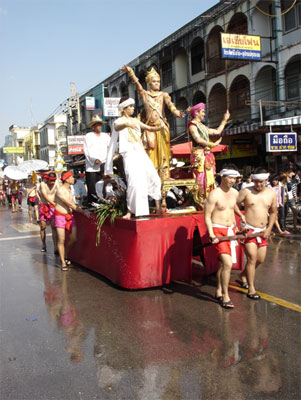 In the middle of everything there was a short parade. Luckily these guys weren’t wearing much, since they immediately became the target of everyone with any water on hand. Oh, that reminds me that the boys in brown weren’t spared a soaking.
Luckily they either seemed in the spirit, or at least resigned to the fact that at least for today they were part of the action! 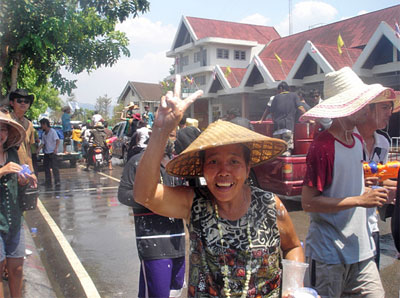 It wasn’t only young people who were in the mood to party. This woman was definitely feeling no pain! 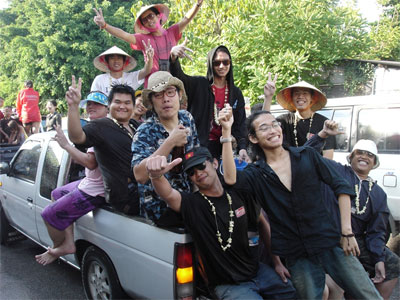 I wonder how they managed to fit in so many people into one small pick-up bed!

Well eventually all good things come to an end, at least for me. I can’t burn the candle at both ends like I did in my misspent youth. It was time to head on home, at least for today. First though I desperately needed a coffee give me the caffeine
burst I needed to pedal up a long hill to my home. I stopped in at my favorite café. When my friend the owner took one look at me, she just burst out laughing! I guess I did look a bit of a sorry sight; dripping wet and white faced. “I
guess you had some fun today” she giggled. All I could do was smile back. I guess I did. And you know what? I had more of the same the next day as well! So if any of you are interested in some good natured wet fun next year, come on up
to Lampang for Songkran. If you do, I’ll personally take you on an excursion you won’t forget!

It's a love it or hate it time of year…and I am not a lover!

A Few More Of My Favorite Things