Some time ago I posted my first 2 submissions. As a comment Stick stated that he enjoyed the anecdotes (thx Stick) and asked if I had some more to tell. Well, the answer is yes of course and I am honoured to share them with you all. Please interpret the
header "Pattaya Memoires" widely, because some stories took place in other parts of the Kingdom. I actually wanted to call my submissions "Thai thoughts and anecdotes" but as I am not really looking forward to some pissed off
Bostonian chasing me on Beach Road with an axe next April, I changed my mind 🙂

City of Angels, Thailand, October 2003. At that time, Bangkok was hosting the APEC summit (Asian Pacific Economic Cooperation). Amongst other international leaders, the president of the USA was coming to town. George Bush and the first lady
were official guests of His Majesty King Bhumibol of Thailand and they stayed for 3 days. They visited the Grand Palace before attending the summit. I don't have to tell you security everywhere in the city was extremely tight and the boys
in brown were everywhere. Traffic, at some places, was simply non-existent, everybody found themselves blocked for hours. Honestly I wouldn't have cared, if as a result of this summit the bars in the Sukhumvit area maybe had to close down.
My friends and me, on holiday, did not know what would happen. If the bars would close Sukhumvit road risked to be packed with ladies of the night (and of the afternoon, and of the morning) looking for some "trade". Imagine the presidential
convoy for some reason being forced to make a detour via Sukhumvit, we wouldn't want him to be greeted by hundreds of bargirls in the traditional way ("hello sexy man, handsum man, I go with you"), now would we ? I bet Bill "I
did not have sexual relations with that women" Clinton wouldn't mind a little detour to sniff up the atmosphere, that's for sure. Thai authorities tried to "clean up" the city as much as possible before the summit and
this included several drug busts in bars and clubs in the fun district a couple of days before Bush's arrival. We were sick of this shit going on.

Anyway, my mates and me thought it would be a good idea to get out of town during the APEC days. We had been hitting the Nana and Asoke areas. As we usually do, we decided to enrich our holiday with a little bit of cultural input. Pattaya
was a great option for this, but for some reason (one of the boy's dicks fell almost of) we took a bus North. Ayuthaya was our destination.

When we arrived there, a local market was going on (as every day perhaps). After trying some of the wonderful local foods, we went to see the ancient city complex and took a boat tour. Quite frankly, we were impressed by the size and beauty
of these ancient structures (or should I say ruins). Luckily we did not come uninformed and the lads listened carefully to me, sometimes like little schoolboys in a classroom, when I read the story behind this extraordinary place out of an 800
pages Thailand tourist guide. At some point other tourists, people we did not know at all, gathered round to listen. I should have charged them for my services! But instead I told them to take a hike. I did not want Thai authorities to believe
I was a tour guide working without a permit (you never know what can happen in this country). In front of the ancient city complex 2 police officers were keeping an eye on things. One of them was a quite good looking Thai female. My friend Fred,
always in for a bet, was prepared to buy me a large Singha if I would ask the female copper to pose for us. I actually wasn't that interested in a beer at that particular time but I did want a picture with the lady in brown. So I went to
her and asked if my friend could take a picture of me standing in between the 2 cops. This was no problem for the Thai police so I got my Singha and my pic. The officers are not widely smiling but I guess that is because they were probably figuring
out why these farangs wanted a picture of the police, leaving the beauty of the female officer as the only reason. I really don't know if they would have suspected we were a bunch of sex tourists on a leave. Guess I'll never know.

Next on our program was Phra Mongkhon Bophit, the big sitting Buddha in the temple to the west of the ancient city. Unfortunately the area around the temple was sealed off and we could not get in. Nevertheless a big bunch of people, both
Thai and tourists, were attending what at first I thought was some kind of elephant show. When we got closer, we saw that the elephants and the mahouts were dressed in some kind of traditional outfits. Men and elephants were dressed in beautiful
red uniforms and were standing in a line when a couple of black cars drove up. In front of the elephants stood some dressed up Thai people and some security agents. Clearly something exceptional was going on here, this looked like welcoming committee
of some kind. Then a big black BMW slowly drove towards the elephants. of which the license plate immediately caught my attention, it stated : "47 – APEC". Inside the sealed off area, next to the elephants, a couple of dozen press photographers
and a few camera teams from TV-stations were patiently waiting. We were getting very curious what was going on so we decided to get as close as possible. When the BMW stopped, one elephant stepped forward and a ladder was put aside the animal.
Security people opened the doors of the car. I immediately recognized Mr. Alejandro Toledo, president of Peru, stepping out of the vehicle. His wife, Mrs. Eliane Karp from Belgium, also stepped out of the car. I suppose this was an official visit
of the president to the temple. By that time we were standing close to the press-entrance of the area. Fred smiled at me and said "Wanna bet, Barry ?". Me : "Huh ?" Fred : "Betcha you can't get in there and take Toledo's
picture from close by… another 2 large Singhas if you can!" I liked the idea and decided to give it a try. Problem was that the photographers all wore some kind of press-card on the chest. Luckily I had a lanyard with me containing some
cash and my Belgian ID and driver's license. The license had, more or less, the same colour as the press-cards the press people had on them. At the entrance there was a Thai and a Peruvian security officer. I made up a story and explained
to the Peruvian one (amongst a few other lingos I speak fairly decent Spanish) that I was a Belgian citizen (showing my id) working for a Belgian newspaper. I claimed to be working on an article on the Peruvian first lady and I showed him my driver's
license which I hope he would take for a press-id. He did not even take a close look at it as he was pleasantly surprised to be spoken to in his native language. Bingo! I was in! 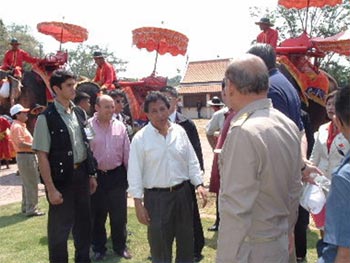 I could not believe it was so easy to get in! I immediately joined the horde of photographers and cameramen. By that time president Toledo and his spouse were next to elephant that was about to bring them to the entrance of the temple. And I stood right
in front of the president, I think at a distance of no more than 3 metres, taking pictures of him and his wife ascending the ladder. 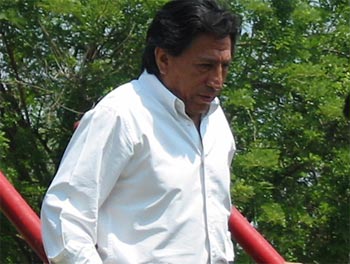 Detail : all photographers were using professional equipment, some used a camera with a 30cm lens. I stood as one of the closest to the presidential couple and I was using a cheap, small, tourist digital camera! Fortunately, nobody made a remark about
this. 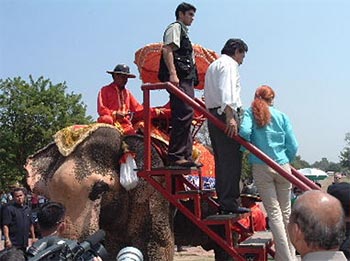 When the elephant proceeded towards the temple I thought that was enough for the day and returned in the direction of the press entrance / exit before I could get caught. The security guide looked somewhat surprised. I greeted him, friendly thanked him
and walked right through without hesitation.

Fred and Will were waiting there with a big smile on their face. "You bastard, you did it" said Fred "you're out of your mind…!"

"Time to pay up buddy" I interrupted him, as we thirstily walked away from the area, looking for the nearest bar, any bar…

A good, fun story. Damning of local security though!