The Flying Tigers were mercenaries as was the Irishman who wrote the Japanese national anthem but that is where the similarity stops. They were the worlds highest paid flyers in 1941. $600 per month and $500 for each Jap plane shot down. At a time when our US pilots in the service got $175 per month.

Not the Tigers. Their job was to kill people. No killing no cash. Later the contract was amended to include planes on the ground. 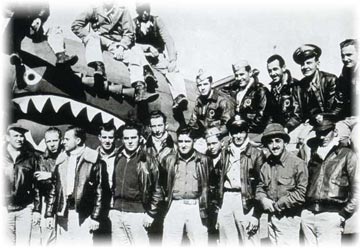 A war correspondent for the Chicago Daily News, Leland Stowe met them in Rangoon’s favorite brothel/restaurant the Silver Grill in September of 1941 and referred to them as, “typical devil-may-care Americans, keen and energetic and rather too cocky, who had been toughened in our armed services but had chafed at the discipline and wanted to get away from it all–and lay up a fat bankroll in the process.”” 100% mercenaries he predicted they wouldn’t last a week in combat. 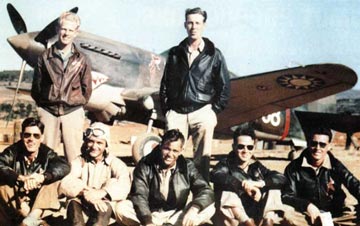 In their first six weeks of operations they killed 585 Japanese airmen with a loss of 7 of their own. They could have done a lot better but most of them couldn’t shoot very well. Their best advice was, “Go in close, and then when you think you are too close, go in closer." Major Thomas B. McGuire, USAAF 2nd leading Ace, WWII, 38 victories

Major McGuire's advice is based on the fact that the closer you are to the target, the lower the deflection angle you need to hit it. Concurrently, the smaller the relative motion between you and the target, the less the angle of deflection. Sure, it is possible to calculate the lead angle on a fast-moving target (in terms of relative speed) at extreme gun range, but this is the lowest percentage shot of all those available . They didn’t take it unless they were trying to force an enemy fighter from an offensive to a defensive position, such as forcing him to break off first in a head-to-head pass.

The K-14 gyroscopic gun sight would not be in general use for another year and the Tigers had to estimate any attempts at deflection shooting.

Bird hunters, skeet and trap shooters are good at deflection shooting. I discovered as a kid shooting with my dad that the magnum loads we were shooting off after a duck hunting trip were easier to hit clay pigeons with because their travel time to the target was shorter than the lighter target loads with smaller shot. 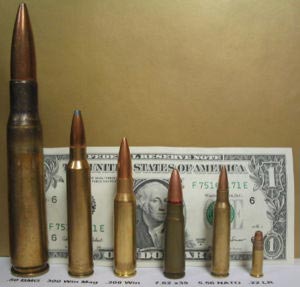 The same was true with the two .50 cal guns in the nose of the P-40. Later production P-40 were equipped with 6 .50 cal guns. A .50 cal projectile was certainly not the most efficient bullet in the sky. 20mm cannons had a far greater destructive force and almost the same rate of fire. But the Browning .50’s were dependable, readily available and quick to the target. Six of them put out a lot of lead. Theoretically they could have shot down the Japanese aircraft from 500 yards away but practically this almost never happened. 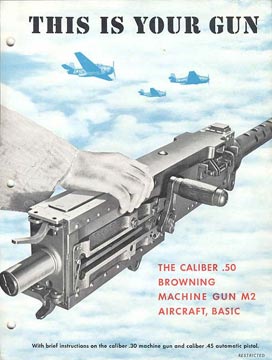 Many commentaries during and after the war said the American P-40 fighter was inferior to the Japanese Zero. It wasn’t, but it would have made little difference anyway because the Flying Tigers never fought against a Zero. The Zeros were not in the CBI (Confused Beyond Imagination or China Burma India) theater of combat during the seven months of the Tigers existence. The Flying Tigers flew against the K-27 (Nate) which was armed by machine guns produced under license from Vickers and powered by an engine made by Hitachi and the Ki-43 (Oscar). Both good fighters but not Zeros. 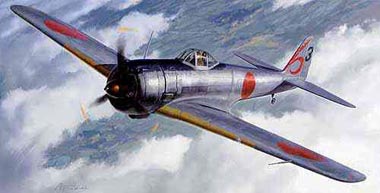 The Japanese fighters were lightly armored and could not withstand even a few rounds from the P-40’s wing guns let alone the .50 caliber nose guns. The Tigers were taught to go at them head on among other things because of the superior American armament and the longer range of their guns. If the Japs pulled up they were easy targets or if they stayed straight were exploded before their guns got in range.

The Allison V-1710 engine was not equipped to function above 15,000 feet as designed for the P-40. A fact that limited its effectiveness in the European air war which was fought at high altitudes. However in the Pacific it worked fine. The plane could also dive at 500 mph, 150 mph faster than any available Japanese fighter and was faster in a straight line.

Arranging for China to purchase the planes was not easy during wartime because of the substantial resources committed to the Lend Lease program to the Allies even before America entered the war. However this fact may have contributed to the Chinese/Tiger P-40 being faster than the other allied P-40 aircraft. 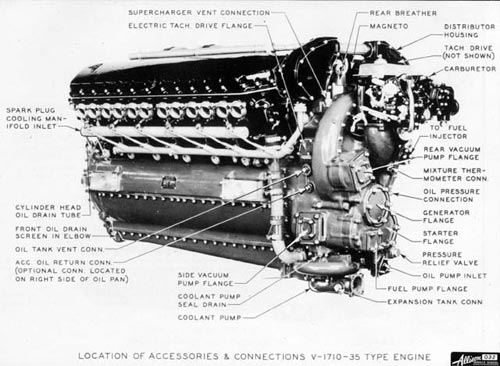 The Allison factory was running at 100% capacity. There weren't any extra engines to be had. Every block and cylinder head was already allocated to an existing contract. But there were plenty of rejected blocks, cylinder heads and such. Allison realized that most of the rejected engine components were usable if the various parts were hand matched and fitted. They set up a production line and began assembling these engines. Individual parts were reworked and carefully matched. The results of this procedure were engines built to very tight tolerances. Dyno tests revealed that they produced as much as 220 hp more than the production line V-1710-33s going into the RAF Tomahawks and USAAF P-40C fighters. Allison had produced some very powerful and very expensive engines. Fortunately they were allowed to bury the extra cost into contracts for U.S. aircraft. These engines certainly account for the performance of the Chinese P-40‘s. In general terms, the fighters could pull up to 370 mph in level flight. Zero was 331 mph, Nate 290 mph, Oscar 305 mph and the Spitfire 354. The Zero could not take 6 "Gs," and the P-40 could pull over 9 "Gs." Most fighter pilots could "momentarily" withstand 9 "G's" or more without blacking out. Dive, pull out and go home or roll for another shot.

The P-40’’s were also armored like a tank. When pilots ran out of ammo they would sometimes ram an opponent with no ill effects to their aircraft.

100 P-40’’s arrived in China without guns. CAMCO (the China based front company) managed to purchase enough .50 caliber Brownings for all 100 Tomahawks. Finding .30 caliber guns (installed in the wings) was more of a problem. Eventually, the 100 Tomahawks were fitted with a mixture of guns. Some were fitted with 7.92mm caliber wing guns, others carried British specification guns in .303 caliber. Still others were armed with .30 U.S. caliber Brownings. This complicated logistics somewhat, but all three calibers were readily available, even 7.92mm, which was the standard for the Chinese Army.

China in 1942 was pretty much like Vietnam in 1968. You could buy just about any military supply you wanted. I know I could have bought a tank in Saigon if the price was right.

Chennault was the boss of the Flying Tigers. He taught them the strong points and weak points of Japanese fighters. He taught them the boom and zoom techniques and never to engage the Jap pilots in a dogfight. They could turn inside a P-40 at lower speeds. His experience as one of the first US Army acrobatic flying teams taught him the value of fighting in pairs which also defeated any advantages the lighter more agile Japanese planes might have had.

In the final battles of late February 1942, the Flying Tigers squadron in Burma dwindled from nine to six operational aircraft, fighting each day, before the last airplanes and a transport pulled back to China. In 10 weeks, the Tigers had between five and 20 airplanes serviceable each day. They met 31 separate Japanese raids, which often numbered 100 or more aircraft, and bagged 217 enemy airplanes with 43 probable, with a loss of 16 P-40’s and five pilots. In comparison, the RAF tallied 74 kills, 33 probable, and 22 aircraft lost in the battles. Chennault's switch in tactics and intensity of training paid off for his pilots.

After 7 months of combat the Flying Tigers were disbanded (too successful) and absorbed into the 14th US Air force only five of the veterans out of more than a hundred signed up. "We didn't come over here for patriotic reasons," wrote Frank Schiel, one of the Tigers.

Chennault after a brief stint with the 14th US Air Force was kicked out of the Army for the second time. He divorced his wife, married a Chinese girl (why is that not a surprise) and started his own airlines. He carried relief supplies and refugees around China. From the beginning, Chennault's airline had links to the Office of Strategic Services, the wartime agency that had conducted espionage and guerrilla operations for the United States. The connection was formalized in 1949. By then, the OSS had become the Central Intelligence Agency, and Mao Tse-tung had occupied most of China.

Chennault's pilots – many of them veterans of the Tigers moved Chiang's troops, supplies, and government assets from one imperiled city to another, and finally to a last fortress on the island of Taiwan. The CIA loaned money to keep the airline in business, and eventually it bought out the company.

Chennault's transport planes flew 15,000 missions on contract for the U.S. Air Force in Korea. In Vietnam, flying C-119 "Boxcars" with the U.S. Air Force insignia painted out, his pilots dropped supplies to French garrisons, culminating with the siege of Dien Bien Phu in the spring of 1954.

During my generation, clandestine air operations would be carried out by unarmed transports and light planes, most of them painted the featureless gray of Air America, the corporate descendant of Chennault's airline.

A number of the other ex Tigers who did not join the 14th Air force started a freight airlines working in Asia and worldwide. It profited in a major way from airlift business during the 1948-49 Berlin crisis and the Korean War and military airlift contracts, generated in large part by the Vietnam war, accounted for 60% of all Flying Tiger revenue during that time period.

1968, first night of the Tet offensive. A soldier clings to his seat as the large jetliner does a wing over and steeply descends to land at Cam Rahn Bay. The airfield is dark as the men hurriedly disembark. Visible faintly in the darkness as it rolls down the runway to take off, the corporate insignia “Flying Tiger Airlines”, a 22 year old Chiang Mai Kelly has arrived in Vietnam.

Well WW II history buffs until next time I leave you some questions to ponder. When did Great Britain invade Thailand? Were they successful? Did an American housewife save Thailand from partition and colonization by England, Australia, New Zealand and China? Did Thailand pay England war reparations for WW II? Did Thailand really surrender to a couple of Americans in a bar in Bangkok?

As interesting as this is, I have to admit I miss hearing of Princess's adventures!