Dateline Bangkok – In an obvious attempt to compete with the “Thai Privilege Card”, the Thai Police have announced the creation and marketing of a “Thailand Police Protection Card”.

Police spokesman Pol.Lt.Col. Buhnprasert announced that the new card was intended as “Another way for the Thai Police to take even more money from wealthy foreigners”. The card is intended to confer protection upon visitors to Thailand, so that the bearers, whether they be respectable foreign tourists and dignitaries, or low-life smugglers and fraudsters can “pay up front” and avoid the usual Thai Police and related gangster shake downs, kidnappings, extortions, theft, and murders.

“This makes life easier for us all”, added Police spokesman Pol.Lt.Col. Buhnprasert, “by formalizing Thai Police paid protection, and by selling the Protection Cards, the police can earn even more money with less effort, and foreigners won’t risk such long hospital stays or jail time during their visit to Thailand.”

The recent spate of foreigners being injured or killed by police, hitmen, jealous lovers, and stray bullets both underscores the need for the card, and provides motivation for foreigners to ante up and buy the card. Pointing to the sales campaign advertisement sign, which illustrates a young backpacker lying in a pool of blood with spent cartridges all around, Pol.Lt.Col. Buhnprasert mocked the slogan on the sign, “Don’t let this be your final memory of unforgettable Thailand!”

To underscore the added value designed into the card, Pol.Lt.Col. Buhnprasert further asserted that – “The card is made from the finest ballistic-resistant plastic laminates, and should stop a medium calibre handgun round, even at close range.”

“At a mere one-million Thai baht per card, we believe that the Thailand Protection Card is a real bargain”, added Pol.Lt.Col. Buhnprasert.

1.) When your baggage is stolen in any Thai airport, the police who control the local theft ring will immediately return whatever remains of your stolen luggage;

2.) When your personal belongings are stolen by a mafia taxi driver, the police who control the cabbies will return whatever remains of your belongings;

3.) If you are in any Thai hospital, and your personal valuables “mysteriously go missing” from your room while you are sedated, the Thai police will return your personal effects, perhaps after replacing your expensive wristwatch with an “exact copy” made in China;

4.) When you stay in any high rise hotel, especially in Pattaya, a security guard will be provided who will unwaveringly stand guard on your balcony 24/7 to insure that you do not fling yourself off the balcony in a fit of pique or depression which seems to commonly contribute to foreigner “mystery suicides”;

5.) Penis reattachment surgery will be provided at a discount to cardholders, a valuable perquisite in the event that your Thai wife, mia noi, or girlfriend catches you with your mia noi, girlfriend, or wife;

No protection is afforded for those who are simply too stupid, and fall for well-known scams: (e.g, fake jewellery scams, Nigerian scams, fraudulent stock scams, and sick water buffalo scams.)

In a related story, the Thai police have rounded up a gang that is already knocking off the cards and selling them on Khao San Road.

Meanwhile, across town, the International Brotherhood of Gangsters and Hitmen, Local 313, AFL/CIO, held a meeting at their union hall to discuss whether or not they would honour the Protection Cards. Our inside source reports that the meeting went something like this:

Lek: You mean we can’t kidnap, rob, and murder any more?

Igorvanovich: We control Pattaya, and we do what we want in Pattaya.

Lek: Yeah, well we control Thonglor, and if the Thai police don’t give us our cut, we won’t honour the cards.

Igorvanovich: Sorry, boss, but I think maybe tea money only flow in one direction.

The union meeting broke up in wild laughter over the very idea that selling “protection” could be formalized into a legal business concept.

Back at Thai Police headquarters, a local news reporter was placed into a body bag after foolishly volunteering to test the ballistic resistant quality of the “Thailand Police Protection Card” . . .

It’s a hardball world, and you have to pay, if you want to play. 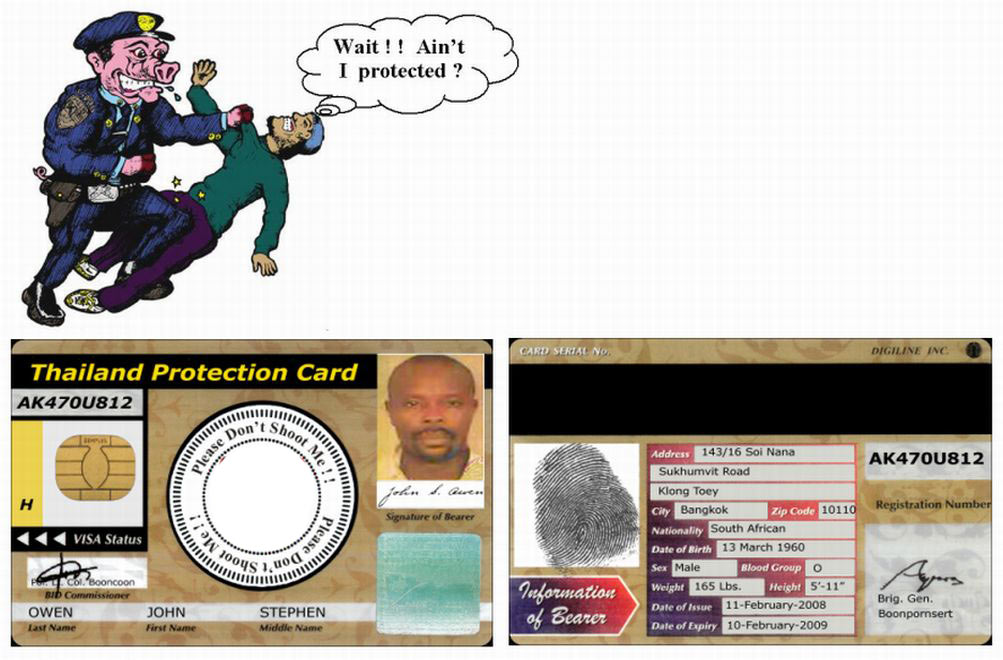 (Disclaimer: This post is of course intended merely as a parody, and we would never intentionally poke fun at the Thai Police or other brave men and women in uniform who make life safer for all of us here in LOS.) (Quiet cough…)

A Tale of Two Thailands