A Home In Khon Kaen Part 2

I had left N’s village near Khon Kaen in good spirits thinking explanations had been well-traversed, there were fairly detailed plans both of the plumbing requirements and the building extension, and N would be on hand to make sure it was done right. But I had hardly been days in New Zealand when it became clear that my confidence was sadly misplaced. The local Thai builders were sure the main drain would be better run underneath the extension than along the side of the building as I had instructed, and they simply did not understand about proper venting of the drains. For those who are unfamiliar with plumbing, proper venting of the drains, preferably right up through the roof, is necessary both to allow the effluent to flow properly and also to prevent pooey smells in the house from the toilet drains escaping through every sink or floor drain. Lack of venting (and failure to use U bends in the drains to provide a water seal against gas movement) is endemic in Thai building – most condos I have visited in Pattaya have this problem. Anyway, to cut to the chase, I reluctantly agreed to allow them to run the main sewer line under the house extension, rather than buy more pipe (which I didn’t understand the necessity for but just couldn’t resolve at a distance). This was a big mistake – the only way I could rectify any problems in future would be by breaking up the floor.

There were several frustrating conversations about the septic tank system and drainage field also, and I was quite concerned about what I would find on my return in to view progress in June. My concerns were justified. Firstly, the plumbing. The U bends I had specified for every drain had been installed but not the big 3 inch vent at the head of the toilet. No, the entire plumbing for the bathroom, laundry and two kitchens (inside and outside) were now served by a single 1 inch pipe, which had been run up the side of the house. The septic tanks had been set in concrete at the proper depth with the right rate of fall but only 4 metres from the house instead of the 8 I had specified. I had said nothing about the vents on the tanks, intending to connect those up to a 2 inch pipe on my return, but no, enterprising N had decided that she would take care of any nasty smells so close to the house by connecting these up to another 1 inch pipe and running this up the back of the lean to extension. But it was the drainage field that left my mouth agape (and made me realise why we seemed to have overspent on this particular part of the project by some 3 or 4 thousand baht. I had planned for a 30 square metre drainage field whereby the septic tank effluent would flow to a distribution pipe at right angles and from there into five parallel 4 metre runs of perforated pipe set at a moderate depth in the soil surrounded by at least 6 inches of gravel on all sides. This had been indeed been done, the only problem was that they had first dug what I can only describe as a rectangular “swimming pool” of a good 1 metre in depth and then put the drainage field in the bottom of that! I was speechless. For a drainage field to work it has to be protected from rainwater runoff and kept as dry as possible – the only moisture should be the effluent.

Secondly the housing extension issues – “typically Thailand!” The rear bathroom wall was slightly pregnant. I had specified glass block tiles to allow more light into the shower recess, but the builders had decided that some of these would look nice in the kitchen wall. The only problem was that they put them right where the range hood was going to go! The window opening in the kitchen had been set far too low – the resulting window would have been a foot below the kitchen bench. An ugly join in the rafters was visible through the skylight for the semi open rear verandah which would do duty as external kitchen and laundry, and a warped dead-end purloin cut across the middle of it! No opening had been left in the low wall around the rear verandah for a doorway.

Well I had a week there, so the first project was to dig up the drainage field pipes and get the “swimming pool” filled in. Nothing could be done about the poor placement of the septic tanks as these were literally set in concrete so I decided to double the run length from the rear tank outlet to the drainage field.

If the sewer line had stayed alongside the house as in my original plan it would have been a simple matter to retrofit a proper vent but the line was now under the concrete floor of the house and I shrunk from breaking it all up and starting again. Eventually I decided to break into the pipe from the bathroom floor drain near the outside wall and was able to install a 2 inch vent in that, to which I joined the 1 inch vent already there. I got the workers to block up the bottom of the kitchen window opening but that was to leave a rather dark room – which the token glass tile diamond did little to relieve. Anyway the inside kitchen is the last project for completion and when I do get to it I will put in another window.

For the rest of my week I busied myself painting the inside and outside of the house with alkali-resistant primer and trialled a colour scheme on the front of the house. I also completed planning for the electrical system and arranged to have the Gibraltar board ceilings installed and fibre cement lining for the external and verandah areas.

Here are some photos of how it looked by the end of that week back in June 06. By the way I gather the two photos accompanying my first instalment may have engendered some confusion – these are of the room and bathroom at N’s sisters house where I was to stay throughout the project until I finally moved into N’s house in December, not of N’s house.

The first photo shows the front of the house, the walls resplendent in the yellow I had chosen and N’s brother working on the front doors – which were an incessant problem, not improved by the way he would use a hammer and screwdriver to open them when they stuck! 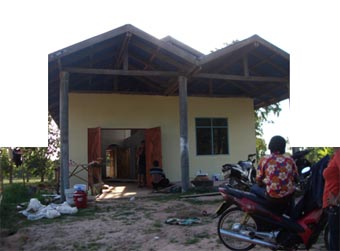 The second photo shows the rear of the house and along one side to give you some sense of the need for retaining which I had to finally address before the rains washed the house foundation away! 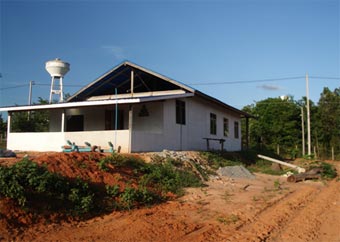 Well, the week ended, I returned to New Zealand feeling that things were back on track. I had met the electrician who would do the electrical work and felt that he would do a reasonable job providing a fully earthed system. I had decided to live with cables run on the walls but had planned for plenty of power points, ceiling fans in both bedrooms and four more in the living areas, and provision for two air conditioning units to be installed later if I ever felt the need, and heavy wiring on a separate circuit for the oven and stove top in the inside kitchen. I had left it to N’s brother to subcontract for someone to do the ceilings and eaves as the first contender had quoted me farang prices, but there were enough examples in the village of adequate work by others. I had also purchased several rolls of foam backed insulation foil which N would staple to the underside of the purloins between the rafters.

Over the next month this work was mostly done to my satisfaction except for the ceiling fans. I had purchased extension rods for each of the six fans with the intention that these be hung at a height at which N could reach the pull switch on each one. Alas, the electrician decided that if the drawstring was low enough for a basketball player at full stretch to reach that was enough – each of my 600 mm extension rods was cut and only about 200mm used. When I finally returned I was unable to buy replacement rod the right width and some real bastardised improvisation using sleeves from the leftover pieces fitted snugly to my new smaller rods with gaffer tape was required to solve the problem.

My sole farang neighbour was kind enough to send the following shots to me of the completed work. 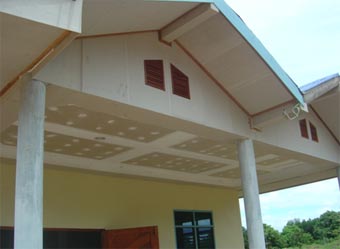 This is a view of the front verandah now nicely closed in with timber vents installed. I covered the very warped barge boards (after priming them first) with fibre cement boards to try and tidy up the finish. 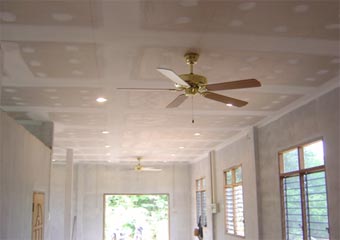 A shot of the inside living areas towards the front doors, showing the gibbed ceiling, ceiling fans mounted too high, and down lights. Note the gap between the ceiling and walls on the left – when I first saw the house the bedroom walls had stopped here when N ran out of money for more blocks. I decided to keep the gap to allow for cross ventilation while bedroom doors were closed and also so that the air con units to be mounted on the right of the picture would cool the bedrooms as well as living areas. So far the cross ventilation has proved a good idea – I don’t have air con yet. But it does mean bedrooms are not insulated from living area noise. 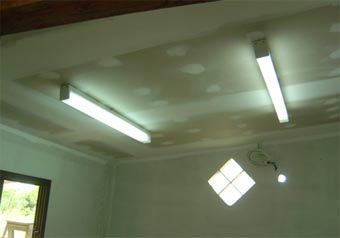 This is a photo of the inside kitchen ceiling showing the two fluorescent light units, along with the unfortunately placed glass blocks I mentioned earlier – right next to the range hood vent hole! 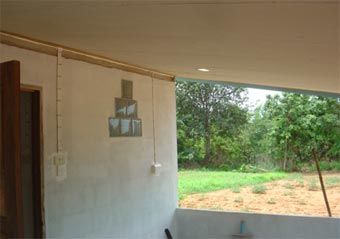 A view across the rear verandah area showing the fibre cement lining reasonably well done– this side is the laundry space.

At the conclusion of this piece of work (using competent tradesmen rather than rice farmers with an old hammer moonlighting as builders) I was feeling quite pleased with progress, but challenges were ahead.

Over the next week I will set up an email address and display in the next instalment, in case anyone wants to write to me in relation to this series, or to discuss building problems of their own.

This is definitely a big improvement over the last submission!

I'll be interested to hear how much it all costs when it's done.