I have just come to the end of a two-month period of travelling around Isaan by car and as Stick’s latest weekly column reports about his trips to the region I thought I’d add my comments to his. I have owned a car in Thailand for several years and have travelled to most areas of the country. I also take a mountain bike with me, strapped to the back of the car. That way I get the best of both worlds and it’s something I can highly recommend to anyone contemplating a similar trip. Obviously you’ll see so much more on 2 wheels in addition to covering long distances speeding through the hot, parched countryside in the car.

As there is a lot to get through I’ve decided to write under headings dealing with different aspects of the trip – and I’m not going to hold back on dishing out the criticisms as well as the compliments!

For all its over-crowding noise and pollution, Bangkok is the jewel in Thailand’s crown. It is the magnet that draws tens of thousands of Thais each year who want to try for a better life. The wats and palaces, the centres of business, commerce and government. Bangkok is the heart of Thailand, and Isaan is the sleepy backwater where cattle graze and the rice grows.

Tesco Lotus, KFC, pizza parlours and cinema complexes have now expanded across the whole country and eating western junk food has become popular even in the most out of the way places. Foreign businesses have made huge inroads into retail and continue to expand. No wonder, as apart from that there is little else in most towns other than the usual run-down rows of dusty old Chinese shop houses and markets in the main streets. As Stick pointed out, you really could forget just which town you’re in – as they all basically look the same. Having said that, there is usually enough to stimulate interest for a day (or an hour) or two.

The point I’m making here is that Stick will have enjoyed places like Roi Et and Nakon Phanom as I did, but precisely because he was only able – and I as a matter of choice – to spend just a few days in either place. Don’t get me wrong, I had a memorable time travelling but it’s been precisely because we spent just a few days in each place and then moved on. Any longer and the boredom would set in very quickly. 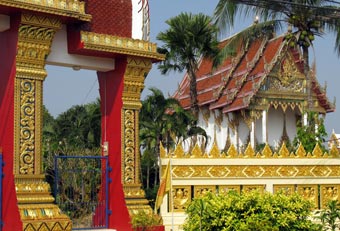 It usually goes like this: Find a hotel, a place to swim, look for internet. Any special restaurants in addition to the usual market stalls and street food? Visit the wats, check out the market, look for interesting walks. Exercise early morning, explore with the bike. Swim then relax by the pool and read. Eat.

Comparative to the locals this is a hectic schedule – all they ever seem to do is sleep. Yes, Isaan is a lazy, laid back place all right! The economy is built on rice, and selling food or imported goods from China in the markets. There is very little else and it was rare to come across a factory or any kind of manufacturing industry. Of course, as a result the air is clean and it certainly is several degrees cooler than other areas of Thailand– especially at night! In the mountains west of Loei it gets below 16 degrees and actually feels uncomfortably cold!

In the main are excellent and you won’t encounter much traffic, which makes for enjoyable driving. It’s only when you get right off the beaten track that conditions can deteriorate (though certainly that’s not always the case). Roads are mostly straight and very smooth. Arterial roads can get busy and are mostly dual carriageway but other roads are being upgraded too, though with so little traffic using them I really can’t understand why! However, you can be pretty sure of getting to your destination quickly and with few hassles, though one big draw-back is the driving standards of some Thai drivers you might meet along the way . . . Enough said about that! 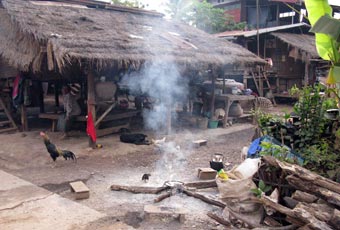 I’ve been travelling around Thailand on and off for many years, and have seen enormous improvements in standards of accommodation during that time. Sure, the older hotels are still standing and they are mostly shabby, grubby and neglected. How they ever broke even or made a profit for their owners is quite beyond me. Never cleaned or maintained, couldn’t-care-less staff . . . To me this speaks volumes about Thai attitudes and the state of mind. However, newer hotels are quite different. Internet access almost always available, comfortable beds, clean bathrooms and pillows (remember those sweaty rice-filled bags?) and in a huge victory of common sense, often situated away from busy areas and main roads, where you can sleep peacefully and uninterrupted – unless the usual contingent of soi dogs outside spot an intruder in the area at 3 AM. We stayed in some great places – and generally paid less than 10 GBP per night to do so.

Of particular note are the many ‘resort hotels’ which are situated outside towns. These are usually also used for ‘short-time’ and have a 3 hour rate as well as an overnight rate, They consist of a group of bungalows set back from the road and hidden by a tall hedge. We stayed in many and found them to be clean, well decorated, quiet (and discreet). Average cost was 400 – 500 baht per night.

Especially fine if you like looking at rice fields! Emerald green colours followed by golden brown depending on the time of year and planting. There are literally thousands of square miles dedicated to growing rice and little else, apart from sugar cane in some areas. You will find home-cultivated vegetable patches if you venture down side roads and dirt tracks where you’ll also come across the friendly local villages that Stick mentioned. Of particular note for outstanding beauty would be the high ground area north and west of Loei and the area on the road between Lomsak and Phitsanulok. Lush, green treescapes which reminded me of North Wales (though not as spectacular or colourful). 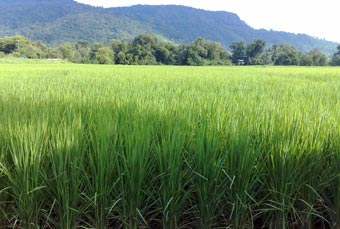 The main problem with the Thai countryside (and also the beaches?) is that it really is too hot and sunny most of the time to be able to get out into it and really enjoy it. It can be done, and early morning (between 5.30 AM and 7.30 AM) is the best time to do so but trekking through fields is not really possible or encouraged. Snakes? Not really, it’d be the insects that would be the major impediment and make it uncomfortable, as of course would the heat and humidity. We who live in cooler climates really are SO lucky if only we’d realise it!

One point I should add. ALWAYS carry a stout stick when walking, especially early morning or at dusk. Stray dogs are a nuisance and many WILL attack! Don’t expect help from locals, they’ll just sit and watch and enjoy the show. Waving the stick will stop the dogs getting too close – but it can be an unnerving experience. Never walk without a stick.

Many years ago, after the rose-tints came off, I was forced to the conclusion that most Thais really do not like us very much. Sure, they smile and appear inquisitive but that’s really as far as it goes. Yes, there is good and bad everywhere – and I’d be the first to 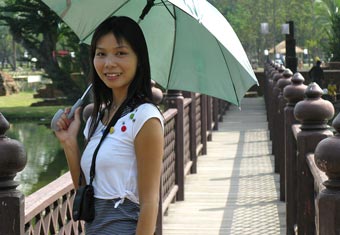 admit that I have met many wonderful Thai people, and have felt happy and enriched from the many fine experiences I have had in this country. I’m always on the lookout to make new (take note of the next word) acquaintances, though I believe that Thais neither wish, want nor or are able to understand us and no matter how much we try to convince ourselves to the contrary, we will never be able to understand or, more importantly, ever be accepted by them. Once we accept this fact it makes our stay here a whole lot easier. Play the game . . Smile, joke then move on.

I’ve just realised – I didn’t really start this sub because I wanted to report on Isaan. OK, it’s picturesque, colourful, laid back, cheap – and I’d recommend you get out and see it. But what I really wanted to report on . . . what really was the EYE OPENER . . . was the FOREIGNERS I met during my travels . . . their habits . . . way of life . . . and how they are perceived by the locals. I’ll attach a few pics which I hope you’ll enjoy then follow up this sub with reports of tales I heard, some of the horror stories I listened to first hand and the things I saw and witnessed with my own eyes.

The stories of the foreigners resident in the Isaan region will be even more interesting…there are some "characters" up there alright.