The Loy Khratong festivities were over and I still had 30 minutes left on my boat hire and the moon was still full. Captain Somchai asks me “what would you like to do now” fully expecting me to say I had what I needed so he could drop me off at the docks. No chance! 90 minutes of cruising the klongs and enjoying the river life had stirred the salt in my veins. Turning to him I asked three innocent words: “Can I drive?” At first he ignored me, acted like he didn’t hear me at all. My eyes never left his as I repeated “Can I drive?” He started to tell me about all the great skill it takes, the years he’s been navigating the klongs of Bangkok, how he was born into a family of klong sailors who hollowed out their sampans from old Buddha statues stolen from temple ruins and how eventually they learned to fasten discarded weed whackers on the rear to use for motors.

Not missing a beat I pull out my retired Navy ID card and push it in his face, “20+ years on the big grey ships” I say and then go on to regale him with stories of piloting battleships with their 16” guns up the Mighty Mississippi during class 5 hurricanes and how during training me and five other guys had to carry an IBS (inflatable boat small) up and down the Silver Strand over our heads as we ran for weeks carrying the thing before being allowed to actually launch it in the sea. Not yet convinced Somchai asked me how I’d navigate his klongs probably expecting me to mention a GPS or an old fashioned sextant and how I’d use the stars to guide me. Looking right at him I didn’t flinch, “the tuktuks will guide me Somchai, never have they let me down.” A big smile crossed his face and placing his hands together in a deep wai he said “you’ve got the con farang.”

Hehe, now how cool is this! I’m sitting in the rear of the boat with my hand on the combination rudder / motor / throttle control guiding our modern sampan up the On-nut klong. The wind is in my face, klong water spraying over the sides, and we’re heading up the klong bound for nowhere in particular. The concept is simple, turn on the big single headlight so you can see where you’re going but as you near a bend in the klong you douse the headlight and slow down just in case another oncoming klong captain is piloting his sampan around the same bend. Once you can see around the bend and all’s clear, back on with the headlight and full throttle ahead. Did you know that sampans can actually kick up on a plane? Somchai didn’t have your normal Toyota Corolla 4-cylnder engine mounted, nope, Somchai’s brother worked in a wrecking yard and had sourced him a high powered V6 from a Nissan Skyline, 520 twin turbo charged horse power! When you squeezed the throttle on this sampan it’s worm rotted hull picks right up out of the water leaving only the long drive shaft and propeller submerged. To keep it from flipping over Somchai had made a giant shark fin from fiberglass and mounted it mid-hull so when up on full plane it stayed in contact with the water. Surfers call these “scags”, or if you have two “twin fins” and if three “triple blades..”

With a long stretch of klong ahead of me I bring her up on the plane and Somchai is grinning from ear to ear, looking over on the main thanon he’s pleased to see we’re passing even the rogue taxis! Klong dwellers hearing the sweet roar of the Skyline V6 coming their way are coming out of their homes and standing on the docks, patios, and balconies cheering us on, amazed that a white farang was at the helm. Now I’m standing like a native, no more sissy sitting for me! The wind in my face, going through my shirt, and right up my cargo shorts tickling my nads. I’ll be honest, I gave serious consideration to tossing off my clothes and sailing naked at hyper speed up the klong, now lined with hundreds of young and pretty Thai girls all on their mobiles texting their sisters up-klong that the great farang sampan sailor was heading their way. They all wanted a glimpse and much to the wife’s annoyance some where holding up big placards with their mobile numbers and email addresses. Think about how good the wind feels on your hand as you place it out the window of the car going 100 kph, now think how that same wind would feel on your nads, now you can see why I was considering losing the clothes. Modesty prevented me from becoming the front page picture on the Bangkok Post, but it’s the thought that counts!

We’re having a great time but I notice the wife has turned from brown to white and is looking a bit peakish and her eyes much more round. I see her pointing behind me and taking a peek I see a blue skiff with a flashing red light and a 150hp Evinrude trying to keep pace with our Skyline V6 and it’s 520 horses, they didn’t have a prayer in Angkor, but being the believer in Karma I am I cut the throttle and decided to see what they wanted. Pulling up beside me they started lecturing Somchai for letting a farang pilot the sampan, and Somchai asks me to show them my retired Navy ID card. I did, and the humbled and mau klong patrolmen did the only sensible thing, handing over a bottle of Thai whiskey they insisted I take a few swigs and chill out a bit. They said my wake was 3 meters high and flooding the living rooms of every klong house I passed for the last 5 km! Reaching for the whisky (never insult your Thai guests by refusing a drink when offered) I pretended to chug down a few ounces of the stuff before handing it back. Wide grins and thumbs up all around and the patrolmen ask me if I want to race their skiff! 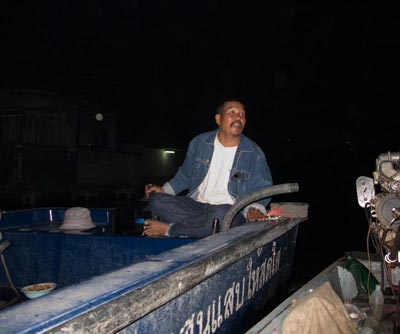 The Skyline V6 is revving, the Evinrude silent in comparison, both the skiff and the sampan are lined up neck and neck and over on the dock the tallest katoey you’ve ever seen had taken off her pink bra to use as a flag. I found it somewhat disturbing to see his / her breasts were still jutting out but now you could see the outline of nipples through the blouse! Bringing the pink bra high over his / her head she / he brought it down in a blur and the race was on!

The skiff got the jump on us and Somchai was cursing his decision to let me drive for the race, not a bit worried I gently cracked open the throttle on the big V6 and once past the turbo lag she kicked up to probably 8000 rpm and lifted the hull right out of the water with only the tip of that big shark fin still in the klong. Somchai had one hand clutching the rails and the other hand around the gold Buddha he wore on a chain around his neck and a big white toothed grin on his face. The first open straight was only a ½ km in length and soon I was dousing the headlight and leaning over to get a glimpse around the bend, seeing it was clear I was back on the throttle and leaving the government patrolmen in my wake. Trouble ahead, short straights and lots of bends has the more agile skiff gaining on us and to add insult to injury the patrolmen are calm enough to be passing the bottle of whiskey back and forth. Not to be outdone I slow down a bit and motion for the bottle and the patrolman at the helm smiles as he hands it to me at over 100 kph! 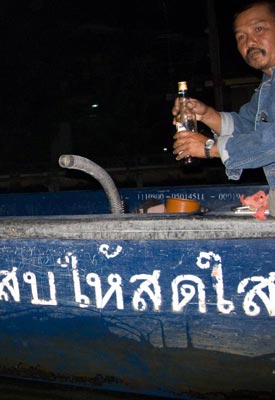 Now that I’ve got their respect I hand back the bottle and yell to Somchai and the wife “hang on with both hands, we’re going full speed ahead!” Folks, the rest is a blur, the scenery was going by in a blur and I’m hanging onto the big motor helping the sampan lean around the corners, throwing caution to the wind I’m no longer dousing the headlight or slowing down, the pride of the US Navy is at stake and nothing is going to stop us now!

Except.. just as we’re clearly ahead and beating them the engine coughs and sputters, Somchai recognizing the sound turns around and grabs a can of gas and pulling the line off the empty can tries to get a siphon going on the new one. He’s squeezing the rubber siphon bulb frantically, he’s caught up in the race and certainly doesn’t want to lose. I hear him curse and look to see the siphon ball had split and gas was spilling into the deck in copious amounts. Knowing the end was upon us I killed the engine and down off the plane we came and settled back into the water as the government skiff passed us with the patrolmen laughing and making some snide remark about US squids!

Somchai grabbed a big pole and pushed us over to a nearby dock and flagged down a passing sampan for assistance. We chose that time to bid him farewell and to thank him for an exciting evening. My wife a bit more than upset with my antics made my heart skip a beat by saying my camera bag went overboard 10km’s down the klong and after seeing the look of shock on my face produced it from behind her back as if to say what could have been. What could have been?

We could have been sitting watching television back home, worse we could have been back in the states having a very ordinary life, or we could have been one of the minions on the side of the klong launching banana leaves with candles. Instead, we came up with the brilliant idea of hiring a sampan for a few hours, total cost of 500 baht, and not seeing just one Loy Khratongs party, but seeing dozens of them all up and down the On-nut klong and at least five temples. Then we dared take a chance to “go Thai” for a few minutes and pilot a sampan up and down the mighty On-nut klong. This was probably one of the best photographic endeavors I’ve ever had, the festivities, the mood, the full moon, and the generous and kind spirit of the Thai people came together to create a night I’ll never forget. Next week I’ll talk more about the photography aspect and share some more photos, but if you’re interested now you can visit my flash gallery at www.bangkokdigitalimaging.com/photos/loy/ and get a preview of what’s to come.

This is what I love about Thailand. You go out to do one thing and then you stumble on to something completely new and have a real adventure. Great stuff! And yes, I am kicking myself for not accepting the invitation to join you!

Misfits And Losers, My Ass