How It All Began Part 7

We decided to take a break and drive down to visit Som’s family in Buriram. This simple visit triggered a cascade of events that would dramatically alter our situation. It turned out that Som’s brother-in-law’s sister was married to a farang from Germany. She had done quite well in Germany as a hairdresser, and had returned to Nongki to build a house for them to stay at when visiting home. Som’s older sister Tam, who is a very sharp cookie, was overseeing construction. It was an attractive, if a bit too rococo for my tastes, but very large, and apparently well built. This house had Excella roof tiles. We mentioned that we wanted to use Excella tiles on our house, but had been told that they were much more expensive. Tam gave us a WTF look and asked to see our blueprints and the proposed materials list.

When she and her builder started looking over everything, they couldn’t stop laughing! We were being seriously ripped off! That was confirmed later that day when we stopped in a local building supply store. By some strange coincidence, an Excella factory representative just happened to be by that day. He took our blueprints, and after doing some calculations, arrived at a price that was 30 % less than what The Monkey wanted to charge us for CPAC! It turned out that we were being overcharged by that amount for almost everything! When we returned to Lampang, the s**t was about to hit the fan!

Tam decided to come with us back to Lampang. She was no shrinking violet, and wanted to be there to confront The Monkey. We called him and his builder over for a meeting. The Monkey was highly offended that we were questioning his honesty. How dare we insult him after “all he had done for us”! The builder looked as though he just wanted to run away. In reply I said calmly that all we wanted was the home we had designed, using the materials we wanted, at a fair price, both for materials and labor. If we could get that, then all would be forgiven. The builder was all smiles and ready to agree. He was quite embarrassed to have anything to do with The Monkey. All he wanted to do is build. That afternoon he said that he would be over with a revised price. He brought a revised price over all right. The price had now risen one million baht! When we asked him WTF was going on? He then said that actually now that he thought about his schedule, he was no longer available to build the house, said goodbye, and drove away as quickly as he could. We later found out that The Monkey now demanded another million baht bribe in order to get the job, and this guy had simply had enough and quit!

It was the age old story of “The Farang That Laid the Golden Egg.” The Monkey had simply decided from the moment he met us that we had money, and that he was going to extract every baht of it from us.

While not completely naïve, I simply did not have enough knowledge to know how things are done here. What was a fair price and what was not? Luckily for us, The Monkey got too greedy. If he had been content to just bleed us a little, he would have gotten away a nice little profit. But just like the farmer’s wife who demanded all the gold eggs at once, he wound up with nothing!

Speaking of greed, the Flea obviously had serious delusions of big money. We had decided to move from his tiny cottage to be out of sight of his Master. When he asked him how much we owed for our short stay of two months, with a smile on his face he calmly said 18,000 baht. We quickly packed our suit cases, threw them into the back of our truck, handed the Flea his key along with 1,800 baht and drove off with a smile on my face! I was through being a doormat! We went and rented a large house for a few thousand a month.

Some people might have given up hope at this point. (The Monkey was expecting us to.) My wife wanted to run away back to Buriram. I however am not a quitter. Besides, we owned a piece of land here. I was not going to walk away from it. I was about to climb back on the horse. I was going to make The Monkey rue the day he pissed me off! In the immortal words of Bugs Bunny, “of course you know this means war!”

Serendipity shines its light on us

We really didn’t have a clue how to find a new builder. In the end it was serendipity that led us to find an answer. We were out for a ride through one of the outlying districts of Lampang, when we passed a very attractive house. It was obviously of a much higher quality than anything we had seen in Lampang. On impulse we decided to stop and ask the owners who had built their home. It turned out that the older couple whose house we had admired was extremely nice, and was flattered that we had stopped to talk with them. They showed us all around, inside and out. The more we saw, the more we realized that the guys who had built this were very talented indeed. All the detail work was well done. We chatted for quite a while and quickly became good friends. They would be pleased to introduce us to their builders, who lived only a few minutes away. They made a quick phone call, and soon we were exchanging wais with Chang Da, Chang Sak, and Chang Bum. We told them our situation, and how much we admired their work. We showed them our blueprints. Would they consider building our house? They seemed eager to agree, but wanted us to see another house that they had built down the road. When we saw the interior of that house, we were completely blown away! It was all done in teak, with an elaborately done ceiling. These guys were no mere builders, they were craftsmen! When they saw the look on our faces, they broke out in huge grins. They were proud of what they created. I knew immediately that they were the ones we had been waiting for all along! Nature had merely taken a circuitous route in leading us to them.

One thing still remained to be settled, the cost. Amazingly what they proposed was ideal. First of all we would buy all the materials ourselves. That way we could spend as little or as much as we wanted to. We would pay them only for their labor, which would be broken down into five installments, as work progressed. The figure they came up with was extremely reasonable. They estimated that even with premium materials, the house would come to a fraction of what The Monkey was trying to charge, and the quality of construction would go up a notch or two. We would have to come up with an actual contract, but for now we waied, shook hands, and sat down to enjoy a few beers. We were back in business! 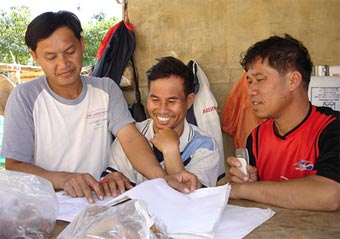 When our builders showed up a few days later to survey our land, The Monkey came running angrily over to yell at them. They had no permission to build anything on “his” property. It was “the law”. Our guys just gave him a grin and continued their measuring. Of course The Monkey was fill of khee-ling (monkey s**t). He had no way to stop us from building on our property! There was a public access road running right behind our land, so, they didn’t even need to set foot on his land. The Monkey started demanding that we show him building permits, and his mouth dropped when we did just that! How had we been able to accomplish that? Easy! We found out where the building inspection office was, met with the appropriate official, filled out a small mountain of paperwork, and received the permit. We even made friends with the building inspector and his wife! They frequently stopped by to chat with us and the builders. When our home was finally finished and we had a housewarming party, they were there to celebrate with us!

A short time after we were having a ground breaking ceremony. 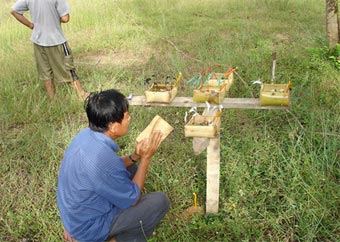 The Monkey glared from across the street. We all turned and waied to him, and he stomped off. The real construction was ready to begin.

I don’t know how many of you have watched a building go up in Thailand. It was a completely different process from anything I had ever seen before. Instead of a single large foundation excavation, they dug 24 separate meter and a half deep holes. They were going to do this by hand with a pick and shovel, but I said this was ridiculous and had them bring a backhoe in to do the work! Into these holes went “towers” of rebar, which were set in concrete. Forms are built around the towers, and these in turn are filled with concrete. When these pillars are cured, “beams” are constructed in the same manner. This house was a hell of a lot more robust than any I had ever seen built in the U.S. The roof structure was made of steel beams! The outer walls were made of reinforced brick and concrete. With a little maintenance I thought, this house was going to last a long time!

Gay For A Day