There she is! He can spot her from a distance! She looks as delicious as ever, standing there at the edge of the pier, sporting a spotless white plain summer dress. Even from 100 yards afar Simon can’t ignore how the mild sea breeze waves its seam, seductively revealing just a tad more of her beautiful long and firm legs, and her long silky hair flowing in sync.

Simon remembers her telling him how she saves this dress for special occasions, and today she’s wearing it for him. He feels elated. Seeing Malee again already feels different than he had expected, even though he hasn’t even come near her yet!

Malee and Simon had first met in Chiang Mai, almost one year earlier, where they spent a short yet very intense six days together. Back then Malee worked at the front desk of a plush new boutique hotel near the famous night bazaar where Simon happened to spend three nights recharging his batteries.

At first he had thought this tall and comparably pale girl from Chiang Rai province wasn’t exactly his type of woman. She was certainly not the wittiest girl he had ever met, but Simon soon found himself taken with her exotic looks, her cheerfully playful nature, and unpretentious attitude. And quite obviously she had found some attraction in him too!

Fantastic times were had together in and around town with her friends, but mostly in blissful togetherness, initially decently innocent, but soon passionately steaming. At this, they both found themselves breaking new ground in ways neither one of them had experienced before. No promises were made, no commitments, all cards on the table. Or so he thought…

But like all good times eventually come to an end, when the day came for Simon to move on Malee could not accept it. Fighting back her tears she pleaded him to come back for her, revealing the love she said she felt for him. Being adamant to entering a long distance relationship with someone he hardly knew, Simon consoled her but didn’t say he would return. And as he began his long journey home, feelings of remorse and guilt mixed with incredulous delight about the intensity of the unanticipated experiences he had just gone through together.

Back home in his corner of Farangland, against good advice from friends and his own best judgment, Simon didn’t have the heart to cut Malee off for good. She didn’t have his phone number, and he made a point never to call or text-message her. However, in the rare case of her being online he would sometimes chat with her on Yahoo, or answer the short but affectionate emails she liked to drop him now and then while working long night hours at front desk.

A few months later Simon learned that Malee had left Chiang Mai after having received an offer to work at the front desk of one of the best resort hotels on Koh Tao, one of Thailand’s main underwater playgrounds, situated sixty kilometers off the coast of Surat Thani in the Gulf of Thailand. Upon hearing the news Simon felt happy for her, as he knew that escaping frenetic city life and finding a good job in the South had been Malee’s dream. During dull hours at work he sometimes even imagined how delightful her seductive guise must appear, splashing through the calm, gin-clear sea, warm as a bath and sparkling a million shades of green, with the backdrop of swaying palms and long stretches of porcelain sand.

And now, half a year later, those occasional daydreams that had helped him to endure all those depressingly cold and dark European winter nights were about to become reality.

Long had he hesitated to take this step of meeting her again! He can’t remember how many times she asked him to come, and how often he lied to her that he couldn’t! He would have very much wanted to, but his fear of raising her hopes he was coming back for her were too great!

“I have Farang boyfriend now! He 24! Almost same as you and me! He live in Finland! He treat me very well!”, she proclaimed merrily via email!

Upon reading this Simon felt relieved Malee’s focus had finally shifted away from him to another man. But even though he felt genuinely happy for her, admittedly the news also bruised his ego with a stinging sensation of jealousy.

Having found herself a new Romeo now Simon didn’t think Malee would ask him to visit her again. Yet she did, and not having to fear for bruising her newly occupied heart anymore, for the first time ever Simon phoned her and let her know that he would consider stopping by on his next trip. Confronted with the question if her boyfriend wouldn’t be opposed to her inviting an old lover to visit, Malee insisted it would be alright as they were friends only and pragmatically reasoned that her boyfriend wouldn’t have to know about the exact nature of their relationship in the past.

And so it happened that in late August 2007 Simon found himself on a speed ferry departing from the uninspiring coastal town of Chumphon, the primary transport hub to Koh Tao on the mainland, out into the Samui archipelago, the reputed epitome of exotic Eden fantasies in the Gulf of Thailand.

Wide-eyed she watches as Simon throws his bags off the boat onto the busy pier and finally climbs over the railing himself. Glimpsing at her while quickly moving his luggage out of everybody’s way, Simon can’t help thinking that she has become more beautiful since the last time he has seen her.

Despite having worked for months in a sunny tropical place, her complexion is still quite fair, making her stand out from the average female Thai population on the island. Mentioning this to her Malee disputes this vigorously: “I chocolate girl now!” she says with a twinkle in her eye. 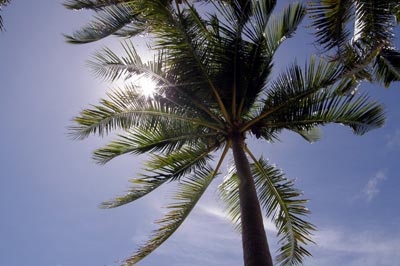 Her smooth black hair is slightly shorter than it used to be, but still reaches down below her shoulders. But most importantly she still radiates the same playful aura he came to appreciate so much during their days of bliss in Chiang Mai.

Without much further ado they catch a sawngthaew to Hat Sai Ri, about midway up the Western coast of the island, where most travelers choose to crash. It’s low season now, so finding a comfortable place for Simon is not a problem.

Just as they drop his luggage in the room rain starts bursting from the heavy and overcast sky like somebody up there has just turned on the tap. The battering shower lasts for the best part of an hour, trapping them in his room.

“So where’s your boyfriend?”, Simon asks her curiously, lying down next to her on the room’s queen sized bed. “Is he on the island? You never mentioned if he would be here at this time or not!”

Averting her eyes, watching the room’s windows fog up with humidity, she says: “No, he not here! He in Finland now! She smiles coyly.

“He doesn’t mind me visiting you?”

Simon had never asked her many questions about the new man in her life. No doubt he had been curious to learn about him, but whenever he tried raising the subject on chat she never really gave a lot of answers! However, it has always been difficult to receive a straight answer from Malee. Chatting to her online had always felt more like filling in a crossword puzzle to him than actual conversation! Extracting information from her while conversing with her face to face was much easier, but still quite a challenge!

“So what does your boyfriend do in Finland?”

“He work import-export business! He earn good money! He work for his dad in big company!”

“Oh, he very nice to me! He treat me very well! He say he love me! You know, when he with me, I don’t spend one single Baht! He pay everything!”

“What a fool!”, Simon thinks straight-faced.

“Yes, I love him! He treat me very well! Take very good care of me you know! We meet at hotel! He come to Thailand first time! Stay for two weeks! He say next time he come to Thailand in October! Then he will buy me ticket and visa so I can go visit him in Finland in February! He want me to meet his family! Very exciting for me!”

This time Simon doesn’t manage stifling his laughter! Picking the icy month of February for introducing this tropical maiden to the bitter cold and depressingly dark Finish winter! What a grand idea!

“What’s wrong?” Malee blurts out with a puzzled look on her face.

Having somewhat regained his poise Simon answers; “Well, nothing! It’s quite alright! But you know, I’m thinking February might not be the best time for you to visit Finland! It’s pretty cold there at that time of the year! Why not wait and go in April or May! It will still be cold, but much better than in February for sure!”

“Hah! That’s no problem! My boyfriend say it okay because have heater! And buy me sweater!”, she proudly exclaims.

Still smirking, Simon gives up. After all, he doesn’t want to ruin her pleasant anticipation.

Conversation shifts to their plan for the next few days. They will only stay on Koh Tao for two nights before catching a speed boat over to Samui. Malee has been given the mission to travel to the archipelago’s largest island to take care of some business there, and Simon decided to join her on the trip.

As they walk out of the room after the rain stops Simon notices that someone has used his or her fingers to sketch a heart that’s pierced by an arrow onto one of the rooms fogged up windows. He wonders if that had already been there when they entered to room an hour ago.

The following day Simon mostly has to himself and uses it to explore the island. Before coming here he had been to Southern Thailand twice some years ago, but only to places at the Andaman coast. Tiny Koh Tao strikes him as not much different. It’s low season, yet the island seems overrun with tourists, scuba divers, day trippers from the neighboring islands – pockets of frenetic activity everywhere. Simon thinks the place seems to have gone construction crazy, and he hasn’t even seen Samui yet. Beauty without the chaos! Is that’s still available in the Gulf of Thailand?

Nights are more casual affairs, with the day trippers having left the island, and the bars strung out on its two main beach areas coming to life. Simon and Malee have dinner together lounging at the beach, catching up on old times, before they return to their respective rooms. Simon doesn’t expect her to stay with him. He has accepted the fact that she is another man’s girl now, and is dead set on not doing anything to shake the foundation of her new relationship. A few relaxed days in the company of an old friend is all he is looking for. Yet he doesn’t know how much more than this the following days will bring about…

Brokenman And Silly Tarts In Thailand

I Found A Girl That's Different