Climbing The Walls In Krabi

Blend the tropical scenery of one of Thailand’s most idyllic beaches with a perennially hyperactive party scene, some of sweetest rock on the planet and spring-like winter temperatures and you’ve got what many rock climbers correctly consider to be heaven on earth. While the northern hemisphere is shivering away, the rocks of Krabi are a balmy 80°C, making this one of the hottest winter climbing spots on earth.

Although the idea of rock climbing the limestone crags around Krabi only blossomed in the late 1980s, word of mouth spread fast among the world’s climbing community, quickly turning Railay Beach into one of the greatest climbing destinations on the planet. One look around this climbing mecca quickly confirms the reality. All the requisite 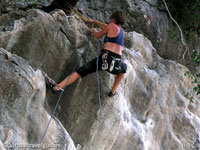 ingredients are here for the creation of a legendary site: ideal rock, scenic beauty, affordable lodging, great weather and a full range of climbing routes. A thriving party scene supplemented by non-climbing backpackers adds an element of fun (or annoyance, depending on your view).

Naturally, without good rock there would be no climbing. You don’t actually climb in Krabi, but rather at a unique headland accessible only by boat, called Tham Phra Nang, and its resident beach, Railay. Longtail boats zip travellers 15 minutes around the cape from Krabi Town to Railay Beach, which is infamous for its beauty, party scene and insane rock climbing. The entire headland is one giant limestone basin with surreal karst formations rising out of the sea and hills like slender fingers beckoning climbers. No motorbikes or cars to distract you, just the soft puttering of longtail boats and the swish of sea breezes through the palms. Guide to climbing in Krabi

The limestone around Railay comes in all shapes, heights, pitches and levels of difficulty. With a staggering 650 routes already established, and more being put up every season, Railay has the distinct advantage of being able to accommodate climbers of all ability. First-timers can learn the basics at one of the beach’s 10 or so climbing schools, then challenge themselves as much or as little as they want.

“My boyfriend is an experienced climber,” one woman confessed, “but I’m not. So I took a 3-day course with King’s Climbers and now we’re doing 5c routes together.”

Experienced climbers will find steep, pocketed walls, gnarly overhangs, hanging stalactites and enough 6a multi-pitch climbs to keep them busy the entire winter. Local climbers use the French grading system for Railay’s routes, which range from relaxing 5as right up to hardcore 8cs. There are so many climbs in the area that even the most experienced climber will have years of exploration ahead of them. Easy days can be finished up with some sunset volleyball or a late night dancing to house music at one of the outside bars. Hard climbing days will earn you a cold beer in your hammock as the sun sets into the Andaman Sea.

With its amazing quantity and quality of routes, Krabi is something like a theme park of rock climbing and bouldering. The diversity of the 600-plus routes means you can take an easy day bouldering around, jumping into the calm Andaman Sea and chilling out on the sand, or tackle a killer route accessible only by boat, abseiling above the water.

One jaded climber had to admit, “it’s pretty cool to climb a 7c limestone karst in the middle of the ocean, then unclip and do a cannonball into the water.” Most rock climbers would concur.

The headland between Tham Phra Nang and Railay Beach East boasts the majority of high profile climbs for all levels. Guided climbs can easily be arranged, and you don’t even have to lug your gear and ropes half way around the world because the climbing shops on Railay have everything you need. Just pack your shoes and harness, a few pieces of favourite gear and rent the heavy stuff on-site at a shop like King Climbers, one of the originals.

Almost all of the established routes are bolted and ready for sport climbing. True hardcore climbers can freeclimb whatever they like, because in Thailand the risk is all your own. Many dedicated climbers spend the entire winter season from November to April in Railay. Relatively cheap bungalows and plenty of Thai food and cold beer are all on hand. There’s always a party going on after dark at one of the handful of beach bars, and plenty of single beautiful people wandering around in search of fun. One pack of French climbers confirmed, “Sex, sand and climbing. What more do I need?”

It all started back in the early 1980s, when a local Thai climber named King started putting up routes on the cliffs around Railay and Ton Sai. As a handful of beach bums – doubling as rock climbers back home – began to trickle in on holiday, they soon discovered an untapped playground of superlative climbing and bouldering. Places like Railay don’t 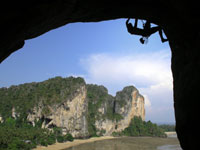 stay secret for long, and like all incredible spots on the planet, it no longer has the quiet hidden feeling of a deserted tropical island.

During the annual winter high season madness, every bungalow is filled and you’ll even see people sleeping out on the beach in the hope of scoring a room the next morning when someone leaves. “I try to save a little money by shacking up with a hottie while she’s here,” an American confessed. “But occasionally my buddies and I have to rent a bungalow.” All of the distractions ever-present on the beach, however, fade away once you’re 100 meters up a sheer rock face. True, you have to share the sand with a few obnoxious backpackers on their gap year, but the bottom line on Railay is that it’s worth it.

Since the entire region around Krabi is littered with the same limestone karst scenery, it won’t be long before there’s a new hotspot minus the tourists. Already, an area about 2 hours south of Railay has been discovered, though the name of the beach shall remain quiet. Routes have been bolted and mapped out, and the soul climbers who can’t be bothered with techno music and topless European sunbathers will have their private playground once again. At least until the first bungalows are built.

I confess, Krabi does sound like it has a few attractions worth checking out.