There’s two things Bangkok is most famous for; its go go bars and its traffic congestion. Both are a chronic problem that the city administrators have been trying to tackle for years without much success, and the locals simply do as locals do in
Thailand and learn to put up with and ignore it. But visitors haven’t got quite the same patience and without 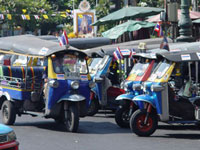 some handy advanced tips you could end
up spending half of your Bangkok holiday sitting in a taxi.

Here’s how to beat the Bangkok traffic blues. Firstly, the mass transport system in Thailand’s capital has come along in leaps and bounds on the back of thirty years of phenomenal economic growth. Of course, city planners in Thailand are
always playing catch up as Bangkok’s population has ballooned in recent decades. But after 10 years of construction two transport systems have been completed, including a two line skytrain and a more far reaching metro system.

The MRT and BTS (as the metro and skytrain are officially nicknamed), cover most places that a tourist would need to get to and even when disembarking at a station there are always taxis waiting to take you the last few blocks if the tropical humidity
is too unbearable to walk. Despite this, the sad reality of modern Thailand is that middle class and wealthy Thais would sooner sit for hours in the convenience and comfort of their air conditioned cars than join the public transport system. Taxis
may be cheap in Bangkok but there’s simply too many cars on the road and not enough law enforcement or traffic planning. When in Bangkok, take the public transport if you can.

Yet there are times when taking a taxi is by far the most convenient option. It’s the only realistic way to get to either of the two airports, and a handy way to get around town, provided your timing is right.

It’s easier to catch a taxi than a sun tan in Thailand, and unless they’re in demand or at a tourist trap, the drivers can be pretty honest with using the meter. A typical 20 minute ride should cost no more than 200 baht ($5), but if you’re
a first-timer to Thailand they may get away with charging you double that. But they hate the traffic just as much as you might, and don’t be surprised if they refuse to drive to a far away destination on the cusp of the rush hour. This
we might add, starts at 3.30 pm when schools finish, but it gets worse between 4.30pm and 7pm. Later in the evening the traffic is breeze, and taxis are the best option for a pub crawl through the city’s naughty nightlife. Then there is
the rain, which buckets down unannounced for hours in the monsoon season. This generally runs from May until October and causes absolute havoc with traffic, especially when the city floods later in each season.

What would Thailand be without the iconic tuk tuk. These three-wheeler buggies are the quintessential Thai holiday experience and can be a fun ride but aren’t recommended in Bangkok. They are unmetered and unavoidable as their drivers relentlessly
hassle you to take a ride, but with their noisy motors and open backs, you’re at the mercy of the din and dust of the city. Once out of Bangkok, by all means take ride, but in this big city an air-conditioned and metered taxi is much better
value. Of course, tourists fall for the free tuk tuk scam all the time. The ruse is pretty simple, they offer to take you to your destination for free or very little but makes several unscheduled stops at tailors and gem shops, where you’ll
have difficulty leaving without having bought something, stay clear of this popular trick.

If your destination is near the waterfront, as many of the tourist attractions are, you can hop on the many water buses that ply the Chao Phraya river. It also gives you some great views. For example, neither the MRT or BTS pierce the heart of Rattanokosin Isle or Banglamphu, where you will find the Grand Palace and Khao San Road. But you can catch a boat from the Phra Athit Pier near the Pin Klao Bridge and ride as far as Thaksin Bridge to link up with skytrain. Getting around in Bangkok

What about buses? Yes Bangkok has plenty of those too, ranging from modern air conditioned vehicles to old, belching unroadworthy old commuter buses that are the cheapest way to get about. However, with all the vehicle pollution and humidity you’re better off sticking to the a/c options. When the traffic is heavy the bus trips take longer but so do the taxis. They are the only however the only way of getting from the central Siam Square to the Khao San Road or Grand Palace area. When the traffic is heavy you’re better off taking the bus, since they at least have the advantage of the newly introduced rapid bus lanes. 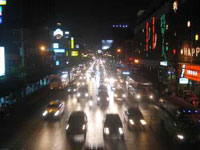 When the traffic really reaches the peak of rush hour and you absolutely need to get across town, the last resort is a motorbike taxi. These are an integral part of the Bangkok public transport network and are used mostly to get from the public transport stations down lengthy streets. Mostly they are used by locals to make the last leg of their journey home, but some tourists use them to avoid a long walk to a hotel that might not be conveniently close to the skytrain. Charging no more than 20 baht (50c) they congregate at the head of the sois (lanes) dressed in special number coloured waistcoats. But they are also willing to go across town for a set fee and can be ruthless at dodging traffic and getting you there in no time at all. Of course, you’re putting your life very much at risk with this option and it’s not recommended on busy roads.

Hmmm, tell us something we don't already know. Readers' submissions are supposed to be a bit more spicy and interesting than this…

Getting around in Bangkok

A Dispatch From The Front Line