Good Night, Be Good. I Love You

I don’t know how to do this, but I want to do it. It’s not about Thailand, but it does apply to a certain degree. Love. What exactly is it? The dictionary defines love in at least 25 different ways with the top response being along the lines of “A profoundly tender and passionate affection for another person.” Going down the list of all the definitions I can see that most of them involve love and humans, but later goes into examples such as a plant loving sunlight or a person loving their car and finally “to need, or require, benefit greatly from” and we can see that love could be and is many things. We can love our children, our objects, music and poetry, and even conscience efforts such as education and exercise. Love then can be most anything we really need or want or enjoy, greatly.

Regular readers will know that I have two parrots, both African Grey’s and I’ve often brought up anecdotes from the time spent interacting with them. For instance the other day one was making the bird sounds of one of her regular visitors and tiring of it I said something along the lines of “Please speak English” to which she promptly replied “I’m a bird” in very clear English. I said “I know, but your chatter is driving me crazy” to which she climbed from her perch and got as close to me as her cage would allow and looking directly at me replies “Relax.” When you tell people of interactions such as these they’ll most often humor you and you just know in the back of their minds they’re thinking “you really ought to get out more”, so you tend to not share a lot of things like this lest they send you somewhere for professional help. Yet, over the last 5-6 years that I’ve owned parrots this sort of word play and examples of cognitive thinking are everyday occurrences. Of course they hardly ever do it when you have a witness, which adds to the frustration of trying to achieve some sort of proof or vindication. After a year or so of these experiences I got on the internet and researched this particular species of parrot and what I found confirmed that perhaps I wasn’t going crazy.

31 years ago a young Ph.d. student went to a pet store to buy a parrot for her research project and already knowing that African Grey’s had a solid reputation for replicating human speech, but not wanting to taint her research she asked the owner of the shop to just pick one out that was in good health. The pet shop owner selected a bird nearly a year old, probably because the younger ones sell faster. Dr. Irene Pepperberg took him home that day and named him Alex as an acronym for her project titled “Avian Learning Experiment. The next day she moved him into her laboratory and over the next 31 years this parrot has spent 8-12 hours a day being trained and studied by Dr. Pepperberg and the many staff members that come and go in any lab. The two constants were Alex and Irene.

Alex became famous. If you Google “Alex, Parrot” you’ll get more hits than most heads of state. You’ve probably seen him on Letterman, The Tonight Show, PBS, Animal Planet, or any number of other shows and he’s been cited on more research papers and publications than you can count. Alex was quickly able to learn to count as high as seven, tell you if an object was made of stone, wood, or material, what color and shape an object was, and when many different shaped and colored objects were placed before him he could tell you, in English, how many of each were there. Several years later he put the scientific community abuzz by mastering the ‘concept’ of zero! He’d also learned to show, in English, his emotions of impatience and gratitude and love. Love? Is it possible? Perhaps according to the definitions in the dictionary but how about in the way you and I normally apply the word in our everyday lives?

Lately we’ve seen some submissions on relationships between farangs and Thai’s accompanied by all sorts of advice. “True love” is often quoted and touted as the absolute way to know if a relationship is going to make it. I disagree very strongly. Love is too generic, too simple, and too overused. Does the punter love that pretty maiden in the bar he rented for the night? Probably for a few hours. Reading the definition examples of love there are several that strongly apply. Does the same punter love the wife he goes home to the next day? Again, several examples apply. I propose that the word “love”, by itself, is overused and often meaningless when used to judge if a relationship will work. We love our cars, our music, certain foods, and of course sex.. What, we can love an action? Yes, according to the samples if we need and desire and enjoy it enough we can certainly love sex as much or more than the person we’re having sex with! So how can love ever be used to judge if a relationship will be successful or not?

I had several relationships where I thought I was in love, but it wasn’t until my marriage to my most recent ex that I truly discovered love by my personal definition. Yes, I’m making the definition of love individual, which it is, which makes it even more useless for gauging the future success of relationships. However, if you take the time to define what love means to you personally, then perhaps you can learn enough from that to gauge the likelihood of success. I learned that “love” was more about commitment, the willingness to compromise, and the desire to do whatever was necessary to continue being with that person. Why? Because of the way she made me feel when we were together, like a drug, like a soft hand, she made me feel in a state that I wanted to be in ALL the time. And I would do anything to be in that state, including wishing I could take back the pain I caused through my own selfishness or stupidity.

How often a person can make you feel that way, how often you find yourself willing to change your behavior to encourage her to be with you and give you this feeling is the real gauge you can use to judge if a relationship will be successful. But it takes more than you. The other party needs to feel the same, to be compatible not only in the depth, but of the type of actions used to express love. Not everyone needs the same type and level of emotions, and not everyone can give them. Compatibility and love, commitment and need, and much more. After all, it’s individual. No one can tell you what you must have for you specifically to be successful, but I would suggest that both parties need and want the same things as a minimum to being successful.

In the case of Alex he gave to all of us. The scientific advances he gave benefits the world as a whole. We learned many things we didn’t know before, methods which are now applied to teaching autistic children, helping stroke victims communicate again, and much more. Most importantly we learned to look. Before Dr. Pepperberg decided to do her study we’d had parrots as pets for years, put men on the moon, and made powerful computers and fast cars. Yet, because she decided to look at one creature a bit more closely, to study it, to learn from it, she learned what was always there but never known. It makes you wonder how many other discoveries are right in front of our faces that would benefit mankind, yet we walk past them everyday without notice because we’re not taking the time to look. This week a study came out showing a naturally occurring chemical in tangerine peels was able to kill the sort of cancer cells responsible for breast and prostate cancer. Imagine a natural food that we might be able to eat to cure cancer in the future instead of chemotherapy and radiation? Because someone looked.

31 years. I once had a dog live to 16 and another to 17, both very meaningful in my life and remembered with love and affection. Dr. Pepperberg spent the last 31 years of her life with Alex conducting scientific research, yet I can’t determine who/what she loved more. Science for what it provides? Humanity for what it needs? Or a little grey parrot who was her best friend and companion for 31 years.. Alex died unexpectedly on September 7th. Usually these species of parrot lives 50-60 years, but Alex once caught a sort of fungus that is almost always fatal and many think never fully cures and so far this is the only explanation for his premature death. The scientific community wasn’t told for several days to give the laboratory staff a chance to grieve privately. Amazing that an entire staff could grow that attached to what is essentially a bird. But this bird they worked with every day, shared meals with as a matter of routine, and helped to enlighten the world on cutting edge cognitive functions. If my own experience is any judge I would guess this “flock” of laboratory staff had one central figure that made them a true family. Alex.

I went off track this week and for that I apologize, but I had a purpose. In the past I’ve tried to encourage giving to charities or looking out for the handicapped, but this week I’m hoping you can find your way to giving to your favorite scientific foundation. We all benefit daily from the benefits science provides and its possible that you personally will benefit in the future, in some way, because of the support you give to your favorite cause. Dr. Irene Pepperberg continues her research with African Grey parrots with two others she’s been working with for some time, Griffin and Wart, and she plans to expand her research as funding allows. Each night including his last when she closed the lab she would put Alex back in his cage and tell him. “I’ll be in tomorrow.” Alex would reply “Good night, be good. I love you.” 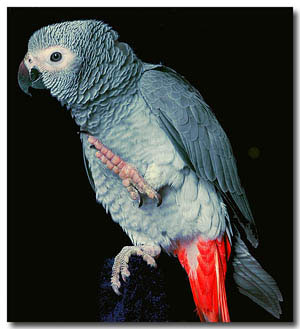 Sorry, no comments today as I have a dreadful cold and as soon as the submissions are updated, I am crawling back to bed!

Not All Bargirls Are Bad