Remember the pet rocks of the 80’s? People were actually paying a significant chunk of change for a small plain colored box with the words “Pet Rock” stenciled on the outside and a very ordinary rock on the inside. I remember watching the news around Christmas time and learning local stores were sold out of Pet Rocks and people were actually fighting in the aisles trying to get the last of the Pet Rocks to be sure they had the gift their children wanted. WTF I said to myself, it’s a rock in a box and you can dig up a few hundred in the backyard if you want one bad enough. Still, people were identifying with a Pet Rock and actually naming them and carrying them around with them. A few enterprising companies even started selling pet rock accessories, little shovels, accessory dirt to create the proper ecosystem, and even clothes and cosmetics so you could make sure your rock would never be embarrassed by not having the latest clothes.

Why do people buy pet rocks? I’ll admit that pet rocks are an extreme example of what I want to talk about but they are a nice lead in…J People take comfort in the familiarity and comfort of their pets and often go to extremes to keep the “family” intact and I’m no exception. What is it about pets which make them a priority in our lives? I’ve had all kinds of pets but most like my barn cat and my dogs have had ‘function’, or in other words they held a job and paid their own way.

Jimmy was my Australian Sheppard and I first brought him home from the dog farm when he was barely six weeks old. Throughout the next 17 years he was with me on ships traveling all over the pacific, lived with me in my house in Japan, the Philippines, Guam, Florida, Oregon, Texas, and California. During his travels he picked up useful skills such as who to let in the house and who not to let in the house. In Japan I lived in a neighborhood where many of the houses looked alike and locks on doors weren’t needed. Jimmy slept in the hallway outside my door. One night I was wakened from my sleep by vicious growling, screaming in Japanese, and running feet. Turning on the lights I saw blood all up and down the hall and leading out into the streets. In the morning a heavily bandaged Japanese man accompanied by two policemen knocked on my door and the Japanese man apologized and said it was all his fault, he was drunk and went in the wrong house and was headed towards the master bedroom (mine) and he said the dog warned him three times, each time he was too drunk to heed the warning, so the dog did his duty and protected me and the wife. He actually wanted me to tell him it was ok. The police only wanted to know if he’s had his shots and I gave them the dogs name so they could verify his shots at the base clinic. Having a drunk Japanese man crawl in bed with you and the wife would probably be hilarious, but what if it was a murderer? I could tell you hundreds of stories about this particular dog, hundreds more about other dogs I’ve owned, but I won’t. He was just the most exceptional dog I’ve ever known and a true friend. He protected my family, pulled my boys from the street when they shouldn’t be in the street, and he made me feel good just being around him. 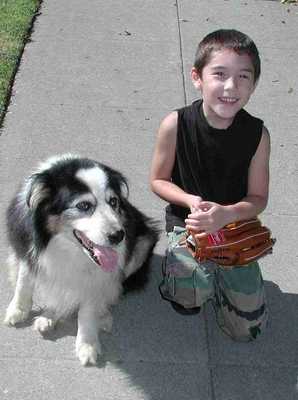 When moving to Thailand we had two pets. A parrot and a wolf. I never seriously considered bringing the wolf to Thailand despite my wife’s deep attachment to him, it’s just too hot and Thailand simply doesn’t allow pet wolfs. The parrot I’m still working on. He’s now spending his time in Hawaii with my son and my ex and when the stars finally line up and I get my permit from CITES (international organization of endangered species) good for 90 days, and during that 90 days Thailand’s bird flu ban eases up and they allow imports, then I’ll finally have him here. We’ve had the permit twice but during both 90 day periods the ban wasn’t lifted. We’ll try again this fall.

Why a parrot? I learned about parrots by accident. I would have never considered one otherwise. However, I learned they are simply the most intelligent animal on earth next to the human animal and they all have unique personalities. They take very little care, have no smells associated with their cages, food, or poop, and are allowed virtually everywhere. If you have an hour or so a day to let them out of their cage and be part of the family and the rest of the day can set them in front of a window to watch the day go by then they’ll be very happy. I’ve mentioned before that I bought a girl parrot here locally? She’s just over a year old now and every morning some very colorful tropical birds fly up to our balcony about 20 floors up and sit there talking with the parrot for a good hour. A different set of colorful birds comes in the afternoon, and yet another set in the evening. I’m guessing she’s the social sort. What makes keeping her worth it?

I travel a lot, so the biggest inconvenience and expense for me is keeping a live-in housekeeper who is not only capable of carrying for the parrots, but enjoys doing so. So far I’ve been lucky. After being gone a week or two on the road, nothing familiar, strange beds, foods, etc.. it feels really good to come home and have a pet that has missed you. You might say that’s what a family is for and I’d agree, it’s just that the parrots become like a member of your family and you miss them as you would anyone else. As I’m sitting here writing this she’s sitting on the couch behind me watching the television, playing with her toys, and will occasionally nudge me to scratch her head. Simple, pretty to look at, and interactions entertaining.

This isn’t just about pets though, it’s about whatever “anchors” you to your home country when traveling and living abroad. Everybody has something. For many of the years the military sent me all over the world it was my Aussie. Now I enjoy the parrots. I’ve known many other people who go through the trouble of pets, but others that ship over a musical instrument, a car, collection of books, or whatever it is that keeps them grounded with a since of consistency in their lives, something they can always count on to provide them a degree of comfort no matter where they are in the world. What’s your anchor?

We’ll hear some of the seasoned expats saying “why do you need what they have in your home country, why did you come here if you weren’t willing to forget about all that and go native?” Does anybody do this? We’ve had immigrants coming to my country forever who bring ‘anchors’ with them in the form of culture. They bring traditional music, foods, dances, clothes and customs that anchor them to their home countries and helps give them comfort as they adapt and enjoy their new country. I can’t even imagine what the USA would be like without all the anchors our immigrants have brought with them throughout the ages, from ethnic restaurants to holidays and parades to Christmas stories and customs. There’s so much to consider when we start coming up with things that give us comfort and enjoyment in a new country.

Maybe some of the more popular comforts are radio and television programming. I have absolutely no desire to subsist only Thai soap operas and popular music, in fact I’m pretty sure the Hague would consider it torture. I wonder if those same expats advising us to adapt totally to the Thai culture watch only Thai soaps and music? If so I question their sanity. There are several ways to get current western programming in Thailand both inexpensively and quickly and I’m glad we can.

Are you the sort of person who arrives at the sea shore and tears their clothes off and jumps in the cold ocean? Or are you the type who observes the ocean for a while, approaches with caution, and then puts in one foot, then up to the knees, finally dunking your head under the surface after you’ve taken the time to adapt? Moving to a new country is like this. There are those who immediately leave everything behind them and start eating 100% local food and enjoying 100% local culture, but I maintain these are very rare individuals.

Most of us ease into a culture over time, and we do it with the help of our pet rocks. Not everyone is cut out to pack up and move to a foreign country. Those that do are adventurous and bold and in general much more exciting people in my experience than those who remain tied to their hometowns and local culture. But when making that decision to move to another country most all of us research the country and number one on our list of what we consider is how many pet rocks this new country has. Does it have a McDonalds and Pizza Hut? Does it have high speed internet? Is there an international food store? International schools for our children? Living accommodations at the standard we’re used to living? Medical care to treat our conditions? Do the cars drive on the right or left side of the road? Can we use a car or must we use public busses and trains? We all have our priorities and lists that reflect our desires and which pet rocks are important to us.

Can we do without our pet rocks? Of course, after all it’s just a rock in a box. We can eat local food and our bodies will grow and be healthy. We can learn the local language and adapt to their local programming. We can learn to ride motorsais instead of driving cars. We as humans are very adaptable creatures and if we must we can leave everything we know and are comfortable with behind, and go forward boldly into a new culture learning and adapting as we go. But will we? Given the choice I’m guessing we’ll all have a drawer where we keep our favorite pet rocks and for the remainder of our lives we’ll treasure and maintain the rocks most important to us. We’ll give up money and time and other things we enjoy, just so we can remain faithful to that certain rock in a drawer.

Is this a design flaw in our human selves? Or is it really a necessary enhancement that ensures we learn and carry with us the knowledge of generations before us? Are pet rocks a necessary component of evolution? I don’t know for sure, but the next time I’m at the airport and I see a new arrival picking up a guitar case from the baggage belts, or collecting a animal cage from animal control, or wrestling a big bag of golf clubs onto their luggage carts, or trying to get a suitcase full of sausages past customs, I won’t criticize them for their peculiar choice of excess baggage. Instead I smile and think of Pet Rocks and understand why everybody has at least a few in the drawer..

I love cats and would love to have a couple. However, living in an apartment means I cannot have cats – the apartment building prohibits pets and it would be cruel to keep cats indoors 24/7. That said, it doesn't seem to stop some of the Thais in the building!