Officer Ma Thida stares at me with a weird scrutinizing facial expression from behind his battered desk. I have the dim feeling he is annoyed by me, the bothersome foreigner, who has intruded his police station with a tedious request.

As for me, I am not entirely sure anymore if it really was a good idea coming here. 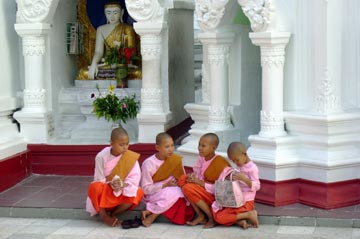 I find myself in Yangon, Myanmar’s largest city and until not long ago the country’s capital. It’s an untidy, irregular jumble teeming with life. A picturesque dishevelment full of crumbling decrepit buildings covered with rooftop orchards of satellite dishes and a sea of telephone wires, creeping through the patchwork quilt of disparage architecture.

Proudly standing for the ancient and timeless, the one iconic sight that surpasses all other monuments in Yangon in grandeur is famous Shewadagon Pagoda, a huge bell-shaped temple that stands casually amid the modern and the familiar. In the heat of the day the supposedly 2500 years old stupa glitters brightly until the sun sets and casts its last rays on the great dome that rises 98m above its base like a shining golden eye, dousing it with soft orange light, enlivening the gilding and making it glow. It can be quiet and contemplative, colorful and raucous. Not without good reason Kipling called it “a golden mystery, a beautiful winking wonder.” For Myanmar Buddhists, it’s the most sacred of all Buddhist sites in the country, one which all Burmese hope to visit at least once in their lifetime. In fact, it is so revered you can almost feel its holiness seeping out of it. 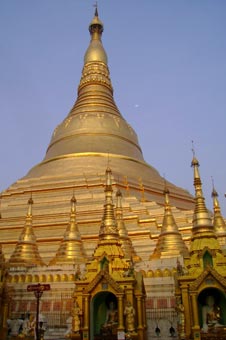 Having roamed the city’s streets for most of the day, I have saved my visit to this impressive structure for the late afternoon of my first day in town.

However, finally walking the awe-inspiring temple grounds, eagerly snapping away at all the wondrous sights and scenes, my priorities unexpectedly begin to shift.

Suddenly I start feeling sick. So sick I feel I must lie down immediately to take rest. Putting down my backpack beside me and using my camera bag as a headrest, I stretch out flat on a podium aloof the busiest area of the compound.

I’m thinking this country has not brought me much luck, suffering from food poisoning twice within ten days.

After five minutes of not moving and slow breathing I feel as if I might manage to make it out of the temple grounds without risking desecrating the country’s holiest monument by regurgitating all over the place. I grab my backpack and hastily start moving.

It’s not until I’m walking swiftly through the long graceful temple gates heading to the exit that I notice I left my camera bag behind. Panic-stricken and cursing my own stupidity I turn on my heels and run back, but to no avail. The camera is gone.

After yet another delirious night without much sleep I return to Shewadagon the following day, less because I’m hoping someone possibly has found and turned in my camera to the temple keepers, but to obtain an official paper attesting the theft for my travel insurance. The designated temple police can’t or doesn’t want to do anything for me. They send me to the local police station.

Fortunately my taxi driver speaks some English. I bribe him into accompanying me into the police station to translate my request to the officers. I can see how he’s not too happy about the prospect of having to deal with the precinct’s law enforcement, but a few thousand Kyat extra he cannot resist.

The police station is an ugly and dilapidated house of cards. It looks as if the slightest breeze could make it collapse. However, in front of the unpainted brick building parks a seemingly brand-new, nicely painted Isuzu police pick-up, totally looking out of place. Cubic capacity over living and working space seems to be the rule.

Stepping inside I’m eyeballed by ten men, almost exclusively dressed in white muscle shirts, slack brown pants, and flip flops. Respectable appearance doesn’t seem to be high on the police’s list of priorities, at least not inside their lair.

The bare walls are moldy and cobwebbed. The furniture comprises of a few old rickety desks and chairs only. A few of them are equipped with antique looking dial telephones, radio sets, and some maps.

I’m offered a chair, and my driver goes about explaining the appearance of me, the unlikely visitor. A discussion ensues that involves a total of seven police officers and lasts the better part of 60 minutes. Not having the slightest clue what’s going on, I watch incredulously.

Eventually Ma Thida, apparently the officer in charge, goes about processing my request. Through my taxi driver he asks me to write a list of the stolen goods. He then hands the paper to one of his footmen who consequently runs out the door and out of sight.

Two hours go by. Seemingly oblivious of the still present foreign visitor the men go about their usual routine, leaning back in their chairs with their eyes closed, or napping with their heads resting on their desks.

Eventually the officer who disappeared with the list returns to the office with a printed piece of paper in close type. It turns out my list had to be taken to an internet café downtown for processing, as the police station’s only computer hasn’t been working for months already.

I look down at the scribbling on the paper. It’s all Burmese characters except for the word “Sony”, obviously designating the make of my stolen piece of equipment.

Officer Ma Thida looks at me with a wicked smile on his face.

I don’t have any complaints.

“Sir, if I may ask, where is your girlfriend?”

“There is no girlfriend! I travel alone!”

My confession to the pretty hotel manager spreads like wildfire, resulting in shy smiles, lots of giggles, as well as curious gazing from the resort’s staff of numerous young local ladies.

Intending to leisurely plop onto the beach with some good books for a few days it is here that I want to sit back, get comfy, and end my journey on a cozy note. 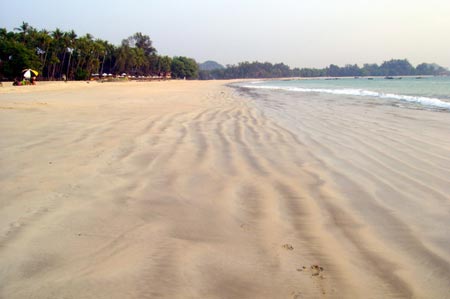 Being mostly accustomed to elderly tour groups, for the hotels’ staff a solo male traveler in his mid-twenties is obviously a rare novelty. It seems whenever I happen to casually stroll by, they inconspicuously gather up, put their pretty heads together, alternately glimpse at me over their shoulders, and giggle like mad. I play along, mostly acting as if I don’t notice, but of course I enjoy the attention immensely.

Dinner time: I walk up the stairs to the terrace of the open air restaurant facing the moonlit sea. From the corner of my eyes I observe how three of the beautifully styled waitresses play their game of haggling who will have the “privilege” of serving me this evening. Eventually one of them steps forward and tiptoes over to my table ever so slowly. She strictly follows protocol.

“Good evening Sir, for how many people?”

Her light-bronze face turns the color of Jalapeno. Seemingly being at a loss for words, she smiles profusely. I make her feel at ease by giving my order. Hastily she stumbles back to the other girls who have watched the scene curiously. They all erupt in mad giggles.

The entree is not bad, save the monstrous cockroach that suddenly climbs onto my plate’s rim from underneath.

After dinner I opt for a nice massage in the resort’s spa. Approaching the reception to make a reservation, as usual I am greeted by a smile that almost melts my brain.

“Hello! I would like a massage in my room at 9pm please!”

My View On The Bar Scene