“Did you notice the old man at the entrance? That’s my father! He is 81 years old! He’s keeping watch! When the secret police shows up, he whistles! Then we escape through the back door, and only you will get arrested!”

“No, not to worry!”, Lu Maw reassures me a moment later with a sly grin on his face, “So far the secret police has never shown up – at least not while we were playing a show!”

At other times of the day though, the brothers Par Par Lay and Lu Maw as well as cousin Lu Zaw have indeed been “visited”. And in the evenings, at show time, occasionally a camera toting government agent mingles with the tourist
audience in this small garage in Mandalay, the second largest city of Myanmar.

Actually these three artists, who call themselves the “Moustache Brothers”, evidently because of the fact that two of them are endowed with conspicuous twirled moustaches, have not been officially allowed to perform in front
of audiences for many years. In earlier times they used to be the best known representatives of the Burmese A-Nyeint-scene – a particular mix of stand-up comedy, vaudeville folk opera, silly walks, and dance performances in sumptuous costumes.
However, for more than ten years already this group of talented artists who used to perform in front of audiences of thousands has found itself blacklisted by virtue of the State Peace and Development Council (SPDC), formerly known as the State
Law and Order Restoration Council (SLORC), an abominable military junta that has run Myanmar since 1962.

And yet the Moustache Brothers are performing every evening in this very garage of their humble home in Mandalay.

“We are alive because of tourists! We want tourists to come! We want a Trojan horse!”

And no doubt, they are very popular with visitors to the city.

I find myself amidst a very international crowd. Aussies, Americans, Italians, French. The latter have a hard time following Lu Zaw’s quite clearly spoken but also pretty fast-paced tongue and stare into space helplessly whenever he
addresses them in a feeble attempt of including them in the show.

It’s dusty, the garage’s ceiling is cobwebbed, and the walls are adorned with hundreds of string puppets carefully crafted by cousin Shwe Bo. The largest area of the room is occupied by a red carpet that serves the artists as
their stage. It’s halfway around encircled with two dozen rickety lawn chairs. There is no room for a greater number of spectators. The ones who are there are almost exclusively foreigners. To bypass the stage ban, the Moustache Brothers
only “rehearse” in front of their tourist audience and the occasionally attending KGB people, as they like to call Myanmar’s military intelligence.

“We show you what you would get to see if we were allowed to perform”, Lu Zaw explains to me with a twinkle in his eye. 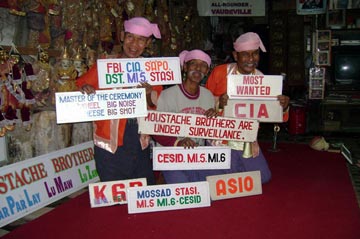 The show itself, that is now limited to English, disappoints. A few samples of traditional Burmese dancing are followed by seemingly harmless jokes about everyday life, jests about corruption or the blackouts that regularly obnubilate whole city districts,
sometimes several times a night. The distinctive crackling sound of a generator in an adjoining room can be made out unmistakably throughout the whole evening, providing the energy for the bulbs that immerse the garage with nervously flickering
light.

Despite the perceived inoffensiveness of such politically tingled jokes, these as well as the group’s openly displayed sympathies for the off-limits political opposition party NLD was two of the three artists undoing. After a performance
given at opposition leader Aung San Suu Kyi’s compound in the country’s capital Yangon on Independence Day of 1997, Par Par Lay and Lu Zaw were arrested and consequently doomed to seven years in prison as well as forced labor in
the stone pit of a penal camp. In 2002 they were finally released, after five years and seven months of imprisonment.

After the show is over and everybody is leaving, I stay behind and chat with Lu Zaw. Finally stepping out into the dark streets twenty minutes later the driver I arrived with 90 minutes earlier who had promised to wait and give me a ride
back to my hotel is gone.

I spot one single trishaw parked on the opposite side of the road. Its owner beckons me.

“Good evening Sir, may I ask where you are heading? Are you in need of a ride back to your hotel? I’ll give you a fair price!”

“Cripes! This guy’s English is great! How peculiar for a simple trishaw driver!”

After inquiring how much he’s asking for and giving him the address of my hotel I say: “Fair enough, let’s go!”, and we are on our way.

He proves to be a talkative fellow.

“Sir, how did you like the show? Did you enjoy it?

“Sir, how many people were there at the show?

“Sir, may I ask, what was the show about?

“Sir, I’m curious, were the jokes funny? What were they about?”

I don’t say much. Reaching my hotel I pay him the agreed fare and politely bid him farewell. He pedals off into the dark.

“Funny coincidence”, I am thinking. After all, I didn’t hear Lu Maw’s father whistle.

It’s time to leave Mandalay. My guesthouse organizes a taxi to take me to the airport. It’s a 60 minute drive.

The decrepit car I’m travelling in seems to be its owner’s pride. A large Porsche sticker shows prominently on its rusty tail. Two small Myanmar flags attached to its two antennas, one on the left and one on the right side of
the hood, are flaunting in the wind.

Only, with increasing speed, the flag on the driver’s side of the hood keeps on sliding down the antenna pole. This U-Nu, my driver, cannot bear. Still flying over foxhole sized potholes at insane speed he leans forward, reaches with
his right hand out of the window while holding onto the wheel with his left, and tries to slide the flag back into position.

He struggles, but eventually manages. The flag’s properly flaunting again. With a big grin on his face he turns to me, as if he’s looking for praise for the mission accomplished.

But of course things are not this easy. Much to the dismay of U-Nu., slowly but surely the flag slides down its pole again. And of course he doesn’t lose a minute and reaches out the window again to restore his vehicle’s dignity.
I watch anxiously. Fortunately there is not too much traffic on the roads at this early hour.

Slap-bang the car’s left front wheel hits a massive pothole and gets swiveled violently to the left. The rest of the car follows suit momentarily. We spin off the road and straight into the ditch. The car abruptly jerks to a halt.
My knees crash against the dashboard.

Déjà vu! I’m upset! Three accidents in four days! This is even worse than the stock car style taxi driving in Bombay.

U-Nu looks blank. Recovering his poise he opens the door, steps out of his car, and slides the flag off its pole. I’m fully expecting him to tear it to tatters. But no! Instead of venting his wrath on the innocent piece of cloth, he
returns with it to his seat.

The engine is still running. U-Nu carefully maneuvers the car out of the ditch and back onto the road. As he accelerates, he extends his left arm through the open window and holds the flag into the wind. There it is flying, perfectly in sync
with the one still flaunting undeterred from the pole on the hood’s right side.

U-Nu proudly grins at me. Mission accomplished. Travelling in style in Myanmar!