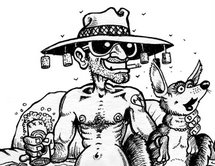 Dear Mr Foskin, my wife and her close friends sometimes use the prefix 'ee' when addressing one another, as in ‘e' Tang’, or ‘ee Noi’ etc. The male equivalent of this form of address is 'ai'.

I have been told this originates from the Sukhothai period but is now considered impolite. I have not received a satisfactory explanation as to why it is both impolite and also acceptable for use between close friends.

I would also like to know why both establishing and then recognizing seniority in terms of how someone should be addressed is so important within Thai society. For example, when speaking to a 49 year old, a 48 year old might use the respectful prefix 'Pi' in recognition of that person being their senior by one year. Why is that?

Whilst last in Thailand, my wife (who is an ex-tour guide) and I meet an old friend who was enjoying the girlfriend experience following a messy divorce. The bargirl addressed my wife as 'Jae'. Apparently, this is of Chinese origin, again in theory a respectful form of address to a senior. Far from being pleased, my wife felt it was quite rude; telling me the BG should have addressed her as 'Pi'.

Crikey Simon me old mate, yer really expect me ter tell yer how a Thai thinks? I had ter consult the missus on these questions.

Yer informant was right mate. It did originate in the Sukhothai period during King Ramkhamhaeng’s time, or around there anyway. Way back then I reckon they weren’t as sophisticated as they are terday, eh? So it was orright ter use this form of address.

Anyway, the missus says that it’s ok ter use these forms of address between very close friends even terday. But she also said that she never uses them herself. Not sure if that’s coz she ain’t got no close friends, or if she’s just too polite. I reckon I’d better choose the latter though or I’m in fer a bloody bollickin’ when she reads this.

We do somethin’ similar back in Oz. We insult our best mates to show them we really like ‘em. For example, whenever I meet Bluey I always say somethin’ like, “How are ya, you old bastard?”

When yer use these Thai terms in an argument or with someone yer ain’t close to it means yer are treatin’ them with disdain, puttin’ them under the thumb, showin’ no respect. I know yer wouldn’t want ter do that would yer? Except maybe ter some of them bloody awful drivers on the road. I reserve me best expletives fer them. Even me wife blanches when I break out into low class Thai. I learned from the best! The lady, if yer can call ‘er that, sellin’ vegetables down the market. She was havin’ a bluey with one of the blokes there one day, and the air really did turn blue!

If youse’re talkin’ to a Thai woman and yer combine ‘ee’ with ‘heeya’ youse’re callin’ her a low class bloody great goanna. I’ve seen a few goannas in me time, and I tell yer what, yer wouldn’t want ter tangle with one of ‘em when they get riled up. So steer clear of that one, eh?

Then there’s a few other choice adjectives yer can combine with ‘ee’ or ‘ai’ too. All of ‘em dangerous and guaranteed ter cause yer a lot of grief. Better not ter learn ‘em at all. Once yer know ‘em it’s bloody temptin’ ter use them. And yer know what could happen? One of them Thais youse insult might just pull out a gun, and that’ll be the last word yer’ll ever speak.

Then yer ask me ter explain the ‘pi’ and ‘nong’ business. Strewth! That’s the most cockamamie thing I ever heard of. I mean, even brothers and sisters have ter address each other as big sister (pi) and little sister (nong) instead of by their names. Now, before I get inter tryin’ ter explain that, yer’d better know how ter say them words correctly. As yer know, Thais use tones ter give a word meanin’. Just as well, too, coz they only seem ter have a few words with lots of meanin’s dependin’ on the tone.

Yer pronounce ‘pi’ with a high tone. Don’t get this wrong and say it like a bloody Ocker with a risin’ tone at the end, coz that will change the meanin’ ter ‘ghost’ instead. I dunno as any Thai would like ter be called a ghost before they actually cark it, eh?

And yer have ter use the rising tone fer ‘nong’. If yer use a low tone it means ‘small dam’, so if yer call yer little brother or a mate with the wrong tone it could mean, ‘dam(n)’ brother! That’ll get yer a bloody nose fer sure!

If yer have trouble gettin’ the tones right, put yer hand in front of yer face with the thumb facin’ up. Spread yer fingers. The thumb is the risin’ tone, little finger is the fallin’ tone, index finger high tone, middle finger (point it horizontal, not up!!) is yer middle tone, and the ring finger is yer low tone. See? It’s simple isn’t it?

The idea of this big and little brother/sister business appears ter be so that everyone knows their place in Thai society. That’s a bit of a strange concept fer you and me. After all, back ‘ome we judge people by their actions, not whether they are senior or junior to us.

As fer usin’ jae, that bar girl was showin’ a real nasty streak there. Jae is used fer low class Chinese. And if yer really want ter insult a Thai of Chinese origin call ‘em a bloody Jek. That’ll get their blood boilin’.

Now, the thing is, when yer read about all this stuff yer come ter realize how powerful words can be. Ter you and me, these words are just sounds. But ter the Thais they are red flags and should be avoided at all costs if youse are a foreigner…sorry, a bloody farung.

Hi there Mr Foskin, I just finished reading your article entitled The Feminist Ideal in Thailand

(http://holtww.com/holtblog/?p=141. Note: youse can also read it here where it was first published: http://www.stickmanbangkok.com/Reader2006/reader2915.htm).

Let's see if we are on the same page:

I come from the San Francisco Bay Area, which contrary to popular myth is a heterosexual man's Hell!

The large Gay population is useless in fostering a heterosexual friendly atmosphere. Most of the women there are taken, or they are man-haters or Lesbians. Period!

BTW, how did Oz females get to be as bad as American females?

And how come most American/Oz men seem to be unaware of how bad things are between the genders?

G’day Claw. Now here’s an interestin’ fact. There is a word fer a man who hates women: misogynist

But there ain’t no word in me Funk & Wagnels dictionary fer a woman who hates men. So here’s one from the old Fos. How about we call ‘er a ‘missedout’?

If yer don’t like that, I reckon the closest we could come would be wife, but that doesn’t always work because some wives do love their men. It just seems ter us men that our wives hate us sometimes, especially when we forget ter take out the garbage!

I almost got inter real trouble one night after I got home pissed and the missus told me ter take out the garbage. I grabbed hold of ‘er by mistake! Don’t do that mates. Yer life won’t be worth livin’ fer at least two months, plus the copious application of flowers and sweet words.

Anyway, ter get back ter yer questions. I don’t think Oz shielas got ter be as bad as Yank shielas. They was always bad. We used ter say that most Aussies were conceived by a beer bottle. That was coz unless the men was drunk they couldn’t stand ter do the deed. Of course, that’s a bit of Oz mythology these days, isn’t it? Isn’t it?

Nah! The fact is, this bloody women’s lib has spoiled a lot of women. They think they’re our equals. Last time I unzipped me fly I still saw what I’ve always ‘ad down there. So how can they be me equal?

Yeah, yeah, I can hear youse shielas getting’ up in arms already! But the sexual reproduction thing isn’t what I really mean, is it? The fact is, we are different fer a bloody good reason.

The trouble is, the women have manipulated the law ter give ‘em an unfair advantage. Where’s the bloody justice for a man when she walks out, takes the kids, and the judge gives her the house, at least half his money forever, the cars and everythin’ else?

So how come most American/Oz men seem to be unaware of how bad things are between the genders?

I reckon it’s the frog in the well syndrome. When yer stuck at the bottom of the well, that little round bit of sky is pretty much all yer know about the rest of the world. And if the only female frogs yer gonna meet are there with yer, well, yer aren’t gonna even know about the delightful little maidens hoppin’ around out there are yer?

Blokes like us who have come to Asia are the lucky frogs…or as one mate of mine who inherited a huge company because he was the eldest brother said, he was the lucky sperm! I’d say ours are too.

Foster promises that in future columns he will be answering YOUR questions. So send him more!

Tears Of The Dragon

The Way It All Began