A Trip To Cambodia

It was time to go to Cambodia. I had not seen my friend Jake for a year and my pal Michael was arriving from New York City. Every year, Michael spends a week in Phuket and then two weeks in Pattaya. He has been doing this for the past twelve years. He always stays at the Safari Hotel on the beach road a block in from Soi Bangla and insists on room 214.

If he must he will settle for room 213 or 215. To say he is a creature of habit would be putting it mildly.

I had been asking him to come to Cambodia with me for years and I was surprised when he said he wanted to see Angkor Wat.

I readily agreed to accompany him and arranged to be on the same flight from Bangkok when he traveled up from Pattaya.

Mike was going to sacrifice a week's stay in Pattaya and find some culture instead of the same old girly bars.

Michael does not date in NYC and hardly ventures out for dinner.

The city has grown way too expensive; instead he saves his money for a South East Asian trip each year.

I have to say that I was concerned as he is usually quite ridged in his schedule: breakfast at ten, then to the internet shop, lunch at two and to the beach at precisely three PM. Dinner in the exact same restaurant every night and then to a beer bar or two for a club soda.

Things worked out perfectly anyway. Jake picked us up at the Phnom Penh airport in his four-wheel drive. I was splashing out at the Cambodiana Hotel as Mike would be going up to Siem Reap for a few days and I wanted to relax by the pool. Mike was staying at the Flamingos Hotel, a stone's throw from the Shanghai and the Walkabout Bar.

We would drop Mike off first and then go back to pick him up and go out for dinner as it was now about eight o'clock in the evening. On the way in from the airport Mike said that his friends told him not to go to Cambodia as it might be dangerous.

Just as Jake and I both said, don't be silly, we came to a traffic jam. Something was blocking the road ahead.

It was a body laying on the street, about a quart of fresh blood surrounding the head.

The police had already chalked an outline around the man.

We passed and then an ambulance came by but not to save him.

The traffic was fierce, plenty of motorbikes most with their lights off crowded the dark streets.

Ahead of us two guys on one bike kicked over a bike passing next to them and the driver went sprawling.

The passenger jumped off and immediately began beating the fallen boy with a chain.

Jake jammed his car in front of the still standing bike and jumped out. As the guy with the chain turned, Jake gave him a hard shove in the chest with both hands and the kid flew back into the air.

He scrambled to his feet in one motion and jumped onto the back of the bike and the two guys took off.

The fallen rider was leaving the scene also and we continued on to Mike's hotel.

'What happened?' I asked.

We approached the Flamingos Hotel from an unpaved side street side street filled with ruts and stones and no street lights.

'Can I walk around here?' Mike asked in a tone that said I can't believe that I came to Cambodia.

'Stay on the main street and don't go too far,' I said.

I dropped my bag off at The Cambodiana Hotel, once the grandest place in town but now so far outclassed by the newer fancier hotels springing up that they had to lower their prices.

We had a surprise in store for Michael, one that has given us great fun three years in a row with different friends.

We ate dinner in an exquisite open-air French restaurant that Jake had picked out and then on to the famous Sharky Bar.

First we must stop and run in for just a second to see a friend,' I told Mike.

Le Cyrcee Club is a dump of a bar, on an unpaved dark street, with curtained windows and door. Just the kind of place a casual visitor would give a wide birth.

The dimly lit room was so narrow that you could touch the bar and the opposite wall at the same time.

I walked in first and a dozen scantily clad girls rushed toward us. I waved my contingent towards Michael who barely had time to get situated on a stool before he was overrun by cute girls. Two sat on each knee while four stood on the rungs of his stool and clambered all over him, hugging, hanging on, caressing him and cooing in his ear. Eight pretty girls vied for his attention at the same time.

None of the young ladies, unlike at the bars in Thailand, asked for a drink. After five minutes one of them whispered in his ear. You go upstairs with me?'

'What's the deal here?' Michael asked and I knew that he had heard the magic words.

I personally defy any man to say no after this kind of welcome. Even Superman would find one of these beauties hard to resist.

There are four rooms upstairs and they were all full; Michael would have to wait another day.

We drove down to Sharky, a large second floor bar with pool tables and filled with Vietnamese and Khmer freelancers.

No trip is complete without a visit to Martinis Bar so we gave Michael the grand tour.

He was amazed to notice that not one girl had a tattoo unlike Pattaya where the girls wear them like a badge of honor.

The next day was going to be a treat for me. We would visit a new branch of Friends Restaurant.

Both places run by a woman to train street children in the restaurant business. We ate lunch at Romdeng Restaurant on street number 287 behind the Lucky Market not far from the Independence Monument, where in the early evening dozens of girls can be seen lounging on the grass waiting for customers.

I opened the menu that boasted a taste of the provinces and saw what I was looking for.

The menu went on to explain that the spiders come from the town of Skun in Kampong Cham.

I know what I'm having,' I exclaimed.

Jake chimed in, I haven't seen you so happy since you ate those grilled snakes in Siem Reap.

You'd eat the north end of an animal going south if it was on the menu.' Michael was looking at the fish stew with tomatoes and galangal. What's galangal?'

You know, like the girl on Gilligan's Island before the Professor and the Skipper got ahold of her,' says Jake. We also ordered grilled pork fillet stuffed with toasted coconut and grilled eggplant with pork and coriander.

The spiders had the texture of popcorn and the accompanying sauce was tasty. The legs are a bit scratchy to eat and they don't have much meat in them. My housekeeper from Roi Et says the arachnids are much better if they have eggs inside of them. 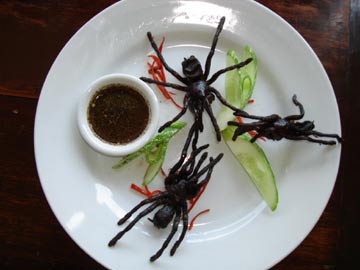 We also ate in a superb Spanish restaurant, Pacharan Tapas & Bodega, on the second floor with a view of the river and the Royal Palace. Excellent wine list, great food and reasonable prices. There are so many good French restaurants with affordable prices it makes Phuket look a backwater small town.

If you are interested in good food and wine, Phnom Penh is certainly worth a visit.

If you are interested in the best guide book, try Adventure Cambodia by Matt Jacobson.

Dining with Frank Visakay is never dull. Actually, having had the pleasure of doing so in Phuket a while ago, I can confirm he is a fabulous dining companion, but I don't think I will be looking him up in Cambodia!

Thai Women? Not For Me!