When a trip to Thailand comes to mind, most people think of lazing the days away on beautiful, secluded beaches, eating delicious Thai food, exploring Buddhist temples and ancient ruins or simply absorbing an exotic culture. For those who are male and over the age of 18, their dreams may take a more carnal form. Whatever forms your Thai dreams take, world class medical care probably does not come to mind; but for me it did. Here is my story.

I was diagnosed with degenerative arthritis in my left hip about 10 years ago. The medical consensus was to put up with the aggravation until the pain simply became intolerable; then it would be time for a hip replacement.

At the time of my diagnosis I was living in the state of Michigan in the U.S. For those who are not familiar, the UAW Union controlled Michigan legislature is a tax and spend organization that believes that when you run out of money, simply raise taxes and keep on spending. For me the tax situation in my home state simply became intolerable so in the year 2001 I moved my small Internet company south to the state of Florida where there are no state taxes.

In the U.S., health insurance does not cross state lines so my Michigan insurance would not transfer to Florida. Not a big deal, I simply did a little research and chose a quality Florida health insurance company (in this case an HMO). Being an honest and upstanding individual, I informed them of my arthritic hip. Not a problem they said, simply fork over $500 every month and everything will be just fine.

Time went on, life was good but my hip got progressively worse. In 2006 I decided that I had had enough and it was time for a hip replacement. I contacted my doctor who referred me to a specialist who examined me and took extensive x-rays. His only comment was “You don’t have any cartilage left in your hip; you have bone rubbing on bone. How can you stand the pain when you walk?” He immediately scheduled me for a hip replacement before any more damage was done.

I contacted my well respected, quality Florida HMO to obtain pre-approval for the operation. They responded that since the degenerative arthritis was a pre-existing condition when I obtained their coverage several years earlier that all I would have to pay was a mere $25,000. They had negotiated rock bottom rates with the surgeon, anesthesiologist, the hospital and the outpatient facility where I would receive rehabilitation and felt that they were being quite generous in passing these rates on to me. I pointed out to them that I had been paying them $6,000 per year for 4 years and had never claimed a dime against my coverage. They thanked me profusely for my generosity but reiterated that my share of the hip replacement surgery would be $25,000; take it or leave it. I decided to leave it.

Having traveled to Thailand many times, I was acquainted with the world class medical care that was available in that country. There are many first rate hospitals in Bangkok but the two that I was familiar with were the BNH Hospital (BNHhospital.com) and Bumrungrad Hospital (Bumrungrad.com). The former had a reputation for very personalized care, the latter a little more assembly-line in nature although still first rate. I chose BNH.

Via e-mail, I contacted Dr Gobchoke Puavivai, head of orthopedic surgery at BNH and informed him of my condition; he asked that I send him my x-rays. Once he studied my x-rays, he e-mailed me back and we set up a date in early July for the operation. I asked about the cost and he responded that it would be in the $15,000 to $20,000 range.

Upon arrival in Bangkok in early July I was met by my very lovely Thai fiancé Jarray. We were going to be married later that month but first she would nurse me through the operation. We checked into the Swiss Lodge Hotel (Swisslodge.com) which is less than 2 blocks from BNH Hospital.

When we walked in the door of BNH Hospital the next morning, we were greeted by a lovely Thai lady who escorted us to the registration area. She helped us fill out the necessary registration papers and then took us to meet Dr Nopparat Panthongwiriyakul who was to become my personal physician. He gave me a complete physical that morning including laboratory tests. We returned in the afternoon and I received a clean bill of health.

The following day I met Dr Gobchoke. We discussed his credentials and experience with hip replacements. When all of my questions were answered and I was satisfied with his competence, he ordered additional x-rays. Upon their review about 45 minutes later, he recommended a partial hip replacement in that the hip socket was still in good shape; it was the hip ball that had to be replaced. Surgery was scheduled for 10 AM the next morning and he asked that we come back at 6 PM that evening to check into our room.

He informed me that 3 orthopedic surgeons would be performing the operation; himself, a senior physician and a junior physician. I told him that I was concerned about infection. He told me that I would be put on an antibiotic drip 1 hour before surgery and remain on it for 3 days following. I was then to take an oral antibiotic twice daily for the next month. I was to spend 1 week in the hospital followed by 1 week in outpatient rehab. I asked about the total cost. He responded that since it was a partial hip replacement, the cost would be less than $15,000.

Jarray and I checked out of the Swiss Lodge Hotel and returned to BNH that evening. We were immediately escorted to our room on the 4th floor. I estimated that there were about 10 rooms on the floor with a nursing staff of 20. It appeared that only 3 or 4 of the rooms were occupied. 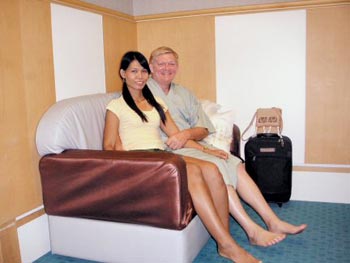 Our room was one of the smallest but still very nice – about what you would expect from a decent Holiday Inn. The hospital bed was at one end of the room near the windows with a foldout bed/couch for Jarray nearby. The room also had a small dining/writing table with 2 dining chairs, a small refrigerator, more than ample closet space, a TV, high speed Internet access and of course a bathroom with shower. I was issued my hospital garb and we settled in for the night.

Early the next morning Jarray got breakfast but I had to fast. The very attentive nursing staff took my vital signs including blood pressure (which they continued to do every 4 hours until we checked out 6 days later). I was put on an intravenous glucose drip; 1 hour before surgery an antibiotic was added.

At 9:30 I was transferred to a mobile bed and wheeled down to the surgical room. Jarray was allowed to escort me the entire trip and hold my hand. I think she was more nervous than I was. The hospital staff was very supportive and kind to her.

Into the surgical room I went where they prepped me for the big event. They added another line to my glucose/antibiotic drip that had a white fluid running through it. I remember a slight burning sensation in my arm and then the lights went out.

I awoke several hours later back in my hospital room surrounded by Thai angels in white nursing uniforms; Jarray was at my side holding my hand. I passed in and out of consciousness for the rest of the day; they had me on a morphine drip. At one point the senior attending surgeon was there and informed me that the surgery had gone very well. I was to stay in bed for 1 day and then allowed limited mobility with the use of a walker. The morphine drip came out after 2 days but I was given a sedative every night to help me sleep.

The hospital stay was unexpectedly pleasant. Jarray and I received 3 surprisingly delicious meals per day, we had cable TV with HBO and high speed Internet access so I could monitor my business at all hours of the day. On 2 occasions we had to press the bed side nurse’s call button to summon help (both times the Internet connection went down). Both times a nurse responded over the intercom within 20 seconds and had someone in the room within 5 minutes to fix the problem. 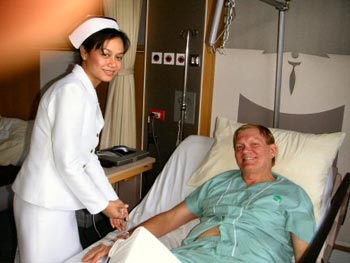 During the course of the hospital stay, I was visited every day by the senior attending physician who kept me informed of my progress. Additional x-rays were taken that confirmed the operation was a success and went as planned. On the last day in the hospital, we were taken down to the rehabilitation center and introduced to the staff who fitted me with crutches. I was to report every morning for the next week to undergo physical therapy. A representative of the administrative staff stopped in later in the day to see if we were satisfied with the service we had received. We were also visited by a representative of the accounting department who reviewed the bill with me in detail. The final tab was $12,500. 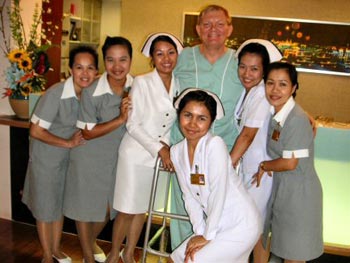 In retrospect I have nothing but praise for the BNH medical and administrative staff. From the day they greet you at the door to the day you are discharged, you are treated with the utmost courtesy, respect and kindness only found in traditional Thailand. The English speaking professional medical staff is highly educated and experienced; they are well qualified and equipped to meet your medical needs. The nursing staff takes their mission of mercy very seriously and cuts no corners in keeping you comfortable and relaxed. Since Jarray and I make our home in Thailand year round, we now regard BNH as “our” hospital and plan annual visits for our yearly checkups. If you find yourself in need of serious medical care, I highly recommend the BNH Hospital in Bangkok, Thailand.

This excellent submission simply verifies what I have always said – BNH Hospital is an excellent hospital with high standards. Best wishes on your recovery!