As I stared into the abyss of my sixtieth birthday, they consoled me that another day wouldn’t make any difference… that as a sexagenarian I’d feel exactly the same as I did before. What rubbish that was!

As I wake up in my bamboo hut on the beach on Koh Chang I feel like death warmed up and at least several decades older than before. I think I must be suffering from a bad attack of bamboo hut syndrome!

As I try to get up from the rock hard mattress on the floor of the hut, I’m stiff and achey, my brain swollen to twice its usual modest size. I long for a cold drink, to splash water onto my face and I desperately need a pee. The hut has no loo and as the keen types are already out on the beach jogging with little wires stuffed in their ears, I can’t avail myself of the world’s largest WC.

I fumble around for my wallet and watch but as always in a tiny bamboo hut, everything I so desperately need is irrecoverably lost. I think of asking the recumbent Cat where she’s put them, but I know that if I do, she’ll curse me loudly, insisting that she’s still deeply asleep.

Seriously dehydrated from last night’s drowning of sorrows, I now stagger out onto the blinding sand and prop myself up against a coconut palm which gives me essential support, before walking down the blinding sand to get a much needed coffee.

I’m thinking that as well as the hangover, a major cause of my sudden acceleration into old age was probably yesterday’s long drive from Surin to Trat which took a good seven hours. Crossing some mountains which definitely weren’t there last time we did the trip, we nearly died a thousand times trying to overtake streams of slow trucks and facing kamikaze pick-ups, all seemingly brand new, coming at us on our side of the road. When we finally got to the passenger jetty at Laem Ngop it was already dark and, horror of horrors, they told us the last car ferry to the island had left at five.

‘Dammit,’ Cat I complain. “So why are we late then? Why are we going to have to stay in a grotty little place in Laem Ngop and not on the beach? Because you went into town this morning to buy a new cable for your purple insect trap and made us late leaving!’

‘But, Andrew, I had to go! Now Mama and Nan have insects while we’re away. Not get hungry!”

So that’s okay then, me missing my sixtieth celebration!

I remind myself that this is Thailand, so we forlornly drive to the car ferry pier on the off chance and to my joy we’re immediately ushered onto the seven o’clock boat which is just about to leave. That’s how I got my evening celebration on the beach after all and as a result, my anniversary hangover the next day.

Sprawled on a bar stool overlooking the beach, I now begin to enjoy my seventh decade, taking in the spectacular beauty of mountains, beach and sea around me as I sit nursing my head and my coffee and thinking about the island. I find it’s always a shock coming back to Koh Chang because, as an Isaan woman selling som tam said to Cat, it changes every day. Two years away and it’s become a substantially different place.

Nonetheless, the sea and mountains are still there and in spirit it’s the same as when I stayed here at the far end of the beach five years ago. It was inevitable that Ben, the protagonist in my novel, “Thai Girl” should stay in the same place and, like me make many friends and set the world to rights in long boozy sessions on the sand.

Both Ben and I love a bamboo hut in preference to sterile, hot concrete and while Koh Chang is now going up-market, there are still a few huts around on White Sands Beach. I asked at reception what the future might bring for this last unspoiled stretch of beach huts and she told me the builders move in on 1st May. Couldn’t they just keep them until my seventieth?

In Chapter 30 of “Thai Girl”, Ben and his friends sit with Sang Som in hand and gloomily predict an environmental 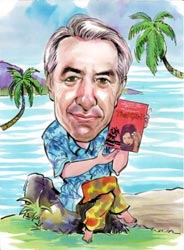 disaster on Koh Chang and I fear their predictions were not far of the mark. Each time I’ve come back I’ve been shocked and depressed at the frantic rate of change which is the one thing that stays the same. This time though, I begin to accept that the island is no longer a simple backpacker place with a quiet lane down the west of the island winding through the palm trees. It’s already a major resort and the road behind White Sands Beach is now more like Chaweng on Samui than its nearest rival Koh Samet.

As I stroll along the broken pavements, the Indian tailors target me aggressively.

Why do they have to do this? It only turns people off. The special quality of Thailand in contrast to India or even Bali is that traders rarely hassle you like this. They’re far too polite and dignified and it’s for this above all that tourists come back to Thailand… for the discreet charm of the Thai people. Who comes to Koh Chang to buy suits anyway?

The official plan from the Thaksin era is for Koh Chang to be developed with a series of up-market resorts which isn’t a bad idea but only if informal, small-scale development can be restrained. But of course it can’t be and they’re all jerry building like there’s no tomorrow. The authorities do a reasonable job of controlling the jungle which is scheduled as a National Park but the old plantations are up for grabs and of course, as everywhere, money rules. So, with the development of the road down the west side, the sleepy little villages now merge one into the next in a ribbon of motorbike repair shops, markets, shop houses and tourist accommodation. The beauty of the mountains on the one side and of the sea on the other now accentuate the tackiness of what has sprung up in between in so very few years. Ben would be truly shocked.

Nonetheless, as I swim out to sea and look back at the island, it’s still incomparably beautiful and I think I’ll always want to come back. After showering, I take to my hammock, trying inconspicuously to shake the sand out of my underpants. I mustn’t grumble that there’s too much sand on the beach, and, bamboo hut syndrome or not, I realize my headache’s not quite as bad as it was.

I even try some light reading, ‘The Two Faces of Islam’ by Stephen Schwartz. More than ever it now convinces me that the West’s demonizing of Islam is so terribly and stupidly wrong. My six decades living on several continents, including among Muslims, tell me that people everywhere of whatever faith just want to get on with their own lives in peace and harmony. Violent extremism is an unnatural perversion which burns itself out unless we fan the flames by tarring all Muslims with the same brush… which is exactly what the terrorists want us to do.

How can Bush not see the damage his aggression must inevitably do? How can people blow each other up when the world is as beautiful as this?

Oooh, we don't like politics around here. Stickmanbangkok.com is officially apolitical.