I run a small company and have 9 sales staff, all Thai, each month, if they hit target, we go away for the weekend, each quarter we have a larger and more expensive and exotic location.

One of the great things about Thailand is the ability to reward your staff with Incentives, their cost is vastly outweighed by the reward and this month, we set out again on one of our regular journeys.

This weekend were going White Water Rafting in Kaeng Hin Peung in Petchburi, and with all things involving travel in Thailand, I stayed out of the picture to enable the best price and to stop Farang gauging!

We stayed at a resort called Saksupha, not a 5 star place, more a 2-3 star place but friendly. We set off in a minibus from Tesco Lotus at On-Nut at 8am, any body familiar with Thai Females will know their penchant for food, before we started out, each member of staff contributed 50 baht to the "Kanom Booty", honestly you think we were going for an 8 hour trip with the amount of Crisps, Fruit and assorted goodies.

Now usually with Mini-buses the driver tries to get you there in the fastest possible time, breaking every speed limit along the way and dicing with death, however this instance we had a responsible driver, 80kmh for most of the way, safe and steady, however the journey time was about 3 hours. Lots of scenery, rice fields and water buffalo aplenty.

We arrived at about 11am and were quickly shown to our rooms, we had 3 big rooms, we had one that slept 5 girls, with a TV, Air Con and a hot Shower / flush toilet. Another room (without TV) for 4 girls and one just for me, it had 4 single beds, no TV and no hot water, so a nice cold shower in the morning!!

After getting booked in, a very painless experience, done in a matter of minutes we trekked off to lunch. Lunch is included (as are all meals) in the price and consisted of about 4 dishes, Rice and soup and Watermelon and Pineapple as desert. Plain water is also supplied, however there is a shop on site that sells beer (Heineken, Chang and Singha).

Whilst lunch is on, they show a film about your Rafting trip that is all in Thai and basically there for your enjoyment not safety

At 1pm we boarded the truck that would take us Rafting, they pretty much pack the truck (think of the Vietnam movies were all the soldiers are trucked through the countryside and you get the idea of the truck) and you take a 20 minute journey to the start of the rafting.

At the entrance to the park is where you pick up your buoyancy jacket and helmet, no problems with the helmet, but if you are of the fuller figure you may have a few problems with the jacket!, as we were a group of 10, we would be having a raft all to ourselves, were told we were raft number 9 and given 2 oars, 2 bottles of water and told to start walking.

The path to the start of the rafting is a muddy sliding uphill downhill sort of path and is 2.5km long, I would advise some good trainers for the trek, most of the girls had flip-flops and they did prove a bit difficult when walking up wet muddy hills, its not an arduous journey, however you do work up a sweat!!

All along the journey you see glimpses of the speed of the water and you hear the screams, kind of like Rollercoaster screams, loud but with a sense of enjoyment and done whilst their smiling.

We kept meeting small boys coming the other way with large bamboo poles (I learnt that they were in fact how they transported the boats back to the start, deflate, wrap round a pole and carry, re-inflate) these small boys were about 10 – 12 years of age and judging by their wide eyed expressions when they saw me, not used to seeing / meeting Farangs

We finally arrived at the start, and told again our boat number, I kept on getting the Thumbs up from all the Boat Boys and the occasional "Good" . We were informed that a man would take photos of us at one point and to all look in his direction to enable a good picture.

All shoes that can not be strapped on your foot are removed and you get into the boat. You have a guy at the front to help and one at the rear, I've no doubt these guys have done this journey a few hundred times and they do seem to know what they are doing.

Very quickly you come across your first Rapid, the water is moving very fast and it's quite a rush, and very good fun, you do need to hang on as I'm sure you could be thrown quiet easy from the boat

The water is quite fast moving in places and there are about 5 – 6 rocky slopes which you move over very quickly, where the rapids are, the boat moves very very quickly and you are on quite a slope, so that if you are at the back like I was, you are looking straight over everybody's head.

Then there are other places where the water is moving very quickly but there is no rocks, at this point you are encouraged to leave the raft and go for a swim, due the buoyancy aids, this is very enjoyable, you just lie back and get whisked along by the water (I should add that the first thought through my head that I was bound to ingest some of the water and I would suffer with vomiting / diarrhea or stomach cramps, but I was a 100% ok). This part was very enjoyable and most of the staff got into the swing of the things by floating along and having a good laugh:

After about an hour of motoring along, we came to a rest stop, this was so that we could have drinks, dry off and have a snack, all drinks and snacks (Chinese Buns) are provided free of charge and are very welcome. We stopped here for about 30 minutes and then got back in the boat. For the next part of the journey you don't require a helmet and its a gentle ride back to the resort, it takes about 90 minutes to make you way back, no paddling just drifting along at about 5 mph with the water flow, getting into the water for a swim or just soaking up the sun in the boat. Along the way you pass a number of more resorts, certainly swisher that where we stayed, but no doubt a lot more expensive.

Back in the resort a chance to shower and change, on sight there are bikes (free of charge) also a paintball park (100 baht a go) an abseiling tower (10 meters) which is free, and fresh air.

Dinner was served at 7pm, again 5 dishes, all very tasty (but quite hot) and the obligatory fruit for after. Then the Karaoke starts, to be honest you have to either join in or make your own entertainment as there is not a lot else to do.

After a goods night sleep, the next morning arrived, breakfast is again a Thai affair, and however they do put dome bread and jam out so "Kanom Pan Ping" is there for the taking.

The minibus came to pick us up at 10.30 am and we said goodbye, on the return journey we stopped off at Chachoengsao and visited the Wat Sothon Wararam Woravihara.

This monastery houses Phra Putthasothon or, as commonly called by the local folk, 'Laung Pho Sothon'. This is a very sacred Buddha image and is most revered by the people. The image is in the attitude of mediation having a lap width of 165 centimeters and it is 198 centimeters in height. Wat Sothon is on the river bank in Amphoe Muang approximately two kilometers south of Sala Klang (the Provincial Hall) Legend says that there were three bronze cast Buddha images floating down from Prachin Buri and they appeared at Sampathan Country of Chachoensao, 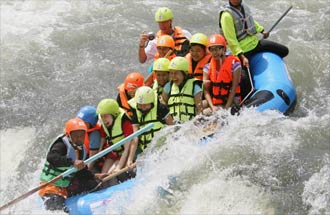 The villagers, after recognizing the situation, tied the three images with ropes and tried unsuccessfully to pull them out of the water. The three images continued floating downstream. The big one later appeared at Ban Laem of Samut Songkhram where the people of Ban Laem enshrined him at Wat Ban Laem. The small one appeared and was enshrined at Wat Bang Phli of Samut Prakarn. The medium sized one, Laung Pho Sothon, appeared in front of Wat Sothon. Then the unsuccessful group built up a small shrine for a ceremony paying homage to Phra Puttha Spthon; they invited him and pulled him up to be enshrined at Wat Sothon successfully.


It should be noted that Saksupha resort does try and charge non-Thais 2000 baht but are easily reduced to the same price for Thais. The charge also includes all food, all drinks and the cost of the white water rafting.