I had dosed off on the boat from Phuket to PhiPhi and that was the scream I woke up too. A wide eyed kid in the nearly empty boat was tugging his dads arm wanting to make sure his dad had seen the same thing as he had. The dad had indeed seen the dolphin. So did I in fact – well, I did see a big fin. Could be a shark for all I know. You ain't in Kansas anymore my friend! I had just spend 3 days in Patong during Songkran and I really needed a place to relax. I had made a mental note – nay, a mental billboard in my mind not to visit Thailand during Songkran ever again. What a wanker-fest that is! And the last thing I needed was a screaming kid. But at least he did not wield any brightly colored water-bazookas. So for now the dolphin-kid was all right with me. I went to Thailand in the first place because I was stressed out and needed a break – not to fight a water squirting militia.

Let me tell you, my very first 6 days in Thailand was anything but relaxing. I don't think I have to remind you guys of what effect Bangkok can have on a "fresh off the plane" newbie. Fun? Well, yes in a weird kind of way. Relaxing? HELL NO. It's only now I enjoy the nightlife of Thailand. Heck, maybe I enjoy it a bit too much now. But back then it scared the shit out of me. And then going from Sukhumvit Soi 4 to a hotel near Bangla Road during Songkran was perhaps not the best remedy to stress. To make matters worse, my ride from Phuket Airport was rear-ended. Big mess but luckily no one was hurt.

What I wanted at that point was the kind of island paradise you see on posters advertising holidays in Thailand. Palm trees swaying over a perfect white beach and that kind of stuff. So PhiPhi was an obvious choice because it was only a short boat trip away from Phuket. Trouble was that it was only 4 months after the tsunami so I naturally did not know what to expect. But I figured it would be ok since Patong was pretty much rebuild and operational at that point in time.

Not so PhiPhi. The devastation here was still unbelievable. The Tonsai Village had taken an unprecedented ass-whooping by mother nature. Not much – if any rebuilding was going on here yet and the surviving locals tragic burden was written all over their faces. The few structures that had withstood the wave were hollowed out and gutted. Rubble and debris was everywhere. Only a couple of places had beds for visitors and I only found 2 operating bars (Hippies and Apache) but Apache was all but empty. If you directed your eyes towards the sea and forgot all the destruction it was really obvious why these islands are so popular. It's really one of nature's crowning achievements even though it was eerie to have the place almost to myself. But despite everything later that day as I lay on a deckchair with a cold beer in my hand I finally managed to relax and had a great time. 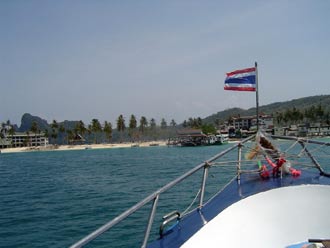 My first trip to Thailand was for the most part a big mess with short spasms of fun and joy. So it was a big mystery to me why I was so hell-bent on going again. It felt very much like quitting smoking or something like that. Heck, maybe it was more like starting smoking. I had the urge big time and managed to talk a friend of mine in to coming with me this time. We opted for a more scenic tour of Thailand this time and ended up spending most of our time in the incredible Krabi province. If you lot haven’t been there yet I can highly recommend it. And since PhiPhi is part of Krabi it seemed obvious to take the boat out there once more to check it out.

I really had to tip my hat to the rebuilding crew – they had arrived big time! The place was hectic with rebuilding and the smiles was a lot easier to spot on the locals. There was just a great optimistic atmosphere everywhere you went and with all the sadness dimming just made the place even more beautiful.

There are some good walks from the village and if you can stand a steep walk in intense heat you can find a great viewpoint overlooking Tonsai Bay. A truly stunning view I never thought I would see in my life. Stuff like that is for other people and postcards. Not for me. Until now.

Up there at the viewpoint among the rocks someone put a plaque remembering a boy who lost his life when the big wave came. It says something about him dancing and partying on in heaven. Does that mean heaven is an never ending eternal rave now? Think maybe I prefer an old fashioned pitchfork up the rear end! Hmmm… maybe I am getting old.

Late that night a young guy with a bellyful of Sangsom had the great misfortune of passing out in the water. He was all over place drunk and somehow got it in his head that taking a nap in the ocean was a good idea. He was out cold. My friend and I spotted him and went out to get him. There was no real panic. He lay on his back and was just floating about a bit. Good thing we saw him before the tide got hold of him though. We woke him up and sent him on his way only to find him an hour later on the ground with blood gushing out of his face. Apparently a local lad had smashed a bottle in his face. Don't know why and he was too drunk to tell us. It took 5 guys to carry the guy to the sole doctor in the village. The next day he got the early boat back to Phuket with some stitches and a mother of a hangover. I wonder if he ever knew how lucky he was.

I met her at a wedding in Copenhagen. We sat at the same table and we quickly found out we shared a passion of Thailand and SE Asia. She was a nice girl and we got on well. A bit of a looker too. She was planning a long trip starting in northern Thailand and ending up on Borneo. And by chance I was planning the same thing only the other way around. We exchanged emails and agreed we should meet up when our paths crossed. By change we met on PhiPhi.

Something rotten in the state of PhiPhi! Everything has been rebuilt and everything has changed. The whole place is up and running and is clearly geared toward the younger crowd. And you know what that means right? Yes, bloody backpackers! Ok, sure they were there before as well. But now it reeks and crawls with them. What is it with them and personal hygiene anyway? And how in gods name would a scrawny pale kid from Birmingham think that dreds would somehow look good on him? My stomach feels like I just swallowed battery acid when I think about the fact that he’s probably gets laid a lot more than I do. Then I think about what he is getting and that gets me all relaxed again…

"you owe me 10 baht from yesterday – we bought some fruit to share and you forgot your money in our room remember?"

"but those rambuttans only cost 10 baht"

I overheard that conversation and many more like it. I kid you not.

But lets get back to the girl I was going to meet. I suggested a little restaurant by the beach that served great seafood. No problem. But she arrived with a backpacking-type Dutch guy who sort of invited himself along. Now that was a problem! I had no idea if this guy was her current boyfriend / leech or not but it was a bit odd with this girl having two guys in tow. The Dutchman and I took an instant and fierce dislike to one another. He hated me because he saw me as completion. I hated him because he was an asshole. Simple as that.

The girl and I quickly got chatting about our travels and got on fine except when we were interrupted with stupid comments childishly mocking the places I had been too. We had great fish and wine – he had fried rice and Chang. He rolled his own cigarettes and even butted one on my plate before I had finished eating. He laughed out loud and called me stupid because I had paid 1,500 baht for my bungalow. He had no idea what the place looked like. Could have been a palace for all he knew. But the idea that someone would spend 1,500 baht on a nice place when a flea covered floor mat was available for 300 baht was totally beyond him. His childish antics became too much and I made my excuses and went home (well, to another bar anyway). I could have put him out of his misery early in the evening and told him I was not about to piss on his territory. My taste in women changed that year. Funny, but that night I felt like a homo coming out of the closet. I realized I had gone native!

A clumsy panorama view from my “expensive” bungalow

These was just a couple of stories from the PhiPhi islands and remember that it is much more fun writing about the negative stuff. It really is an amazing place. Sure, there are many tourists around but you can easily find a place to be alone or near alone.

Note. If you are allergic to backpackers you might want to avoid the village 🙂

Excellent stuff. People like the guy you mention are nauseous!