This small essay talks about some places easily accessible from Bangkok, and not actually in “Bangkok” itself.

It’s that time of year now when the clouds set in and the skies resemble the gray tarmac of the roads around Bangkok. In fact, getting decent skies is one of the challenges to good photography in and around Bangkok and in Asia. One can only dream of the skies in other parts of the world that are a little less consistent in their dreariness. For a keen photographer, there’s nothing worse than an Asian hazy, cloudy bright white sky. Many will note, that even in premier publications, there are a host of pictures of Asian monuments that have awful skies in the backdrop. So when on a photographic endeavor that doesn’t include animals in close up, one must be cognizant of the sky as a background. Now clearly the best times for photography of beautiful vistas are early in the morning and late in the evening. Be that as it may, not all of us are blessed with the keenness to get up at 5 AM (or worse) and head to our favorite spot. There are always a myriad of things that get in the way of taking “that photo”. So one must either make the time, or look for conditions that assist us for photography at any time of the day. (Now bring in the purists to scream foul). I am talking practical photographic fun for anyone. Now to get back on topic, when you look outside in the morning when you wake up (or afternoon, no names mentioned) and you see blue skies, moody high cumulous clouds and a light breeze, whisk up your camera bag and head down to the local temple, the river or a nice spot somewhere where you remember “I wish the skies were nicer”. (I might do a little tutorial on getting good skies in photos in the middle of the day. Many wonder why the buildings or people always turn out dark. )

A favorite spot of mine (which is not a wake up at midday spot) is the Sanctuary of truth in Pattaya, Soi Na Klua 12. This is a gem in Pattaya which is a tad expensive to some tastes (around 500 baht basic, more if you want the boat ride), but is a marvel to behold. Made completely of wood, it’s 27 years in the making with an anticipated 15 more to run. Ouch! It has a tasteless dolphin show which is can be missed. But the food’s not bad. I recommend you spend a few hours marveling at this one.

The grounds are exceedingly big, and there’s talk of a resort being built there in the future. The Soi to get there is narrow gutted and winds about. Big buses get down there so be careful if driving. You take the horse drawn carriage to one spot or another depending on which “package” you select.

The photo that follows is one I took with a beautiful blue sky. You can see my better half standing on the left, looking up with camera. This gives you some idea of the magnitude of the building. 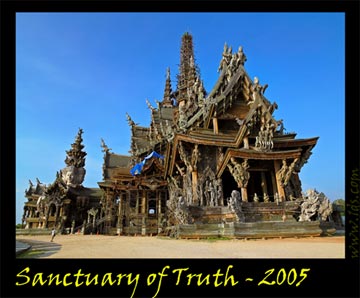 The Carvings are special Unlimited detail goes into every story

There is meaning in every piece. (I struggle to remember what the guide told me, I should have a recorder or a notebook…. Note to myself…) This is not a temple, it’s meant as a depiction of the futility of all things material. Kind of weird given the bucks (baht) spent on it.

The Sanctuary is a tough thing to photograph. Up close its enormity is daunting. And further away you’re struggling with the glare from the water, the skies and the foliage. But it’s a day in itself. Don’t try and do the butterflies, tigers and other parts of Pattaya in one day. It’s too much. But this is a must for Pattaya dwellers. Even if you’re still suffering from the miasma of a night out, you’re still in for a treat. Plus there’s places to sit and you can just hang about and soak it all in. No pressure. Also catch the carvers and builders who live on the site. They chat and carve all day and are fine with photographs and silly poses. How they do it safely is anyone’s guess.

Being in Bangkok, one of Asia’s main hubs, means that you can travel almost anywhere easily. One of the main attractions out of the Bangkok airport is Siem Reap. This town in Northern Cambodia houses temple and attractions from the “Angkor” period. But this is definitely one of the places in Asia I love to visit and photograph. The people here are special, the little beggar kids are very amusing (in many languages). Being poor here is the norm, but it seems not to bring you down, like it does in Phnom Penh for example. There are stacks of good accommodations here, and since my first visit in early 2001 it’s boomed. This is not all good, as I remember a couple of glorious mornings at Angkor where we were the only people there. Now you’ll grace the sunrise with at least 1000 others, all over the place, getting in your wide angle photos. Cost of progress I guess.

Now try not to look too professional if you’re using a DSLR, we were almost marched out of Angkor Wat itself on one tour when the officials thought I was doing a commercial shoot. I ended up signing a document telling them I was a “fried egg sandwich”** and they were happy with that and we were allowed to continue our tour. There’s a whole story just around that episode. But they let us be, ultimately.

We’ve done Angkor in the rainy season, the hot season and in between. The last trip had the best skies – by a mile. Check around, pick a time with good skies. It makes a huge difference.

** I wrote the note, and it could be interpreted as anything. They really wanted me to sign a document saying I was not a professional photographer and that I was not making a profit from the images. But because they wanted that, I wrote something that sounded like that, but could have meant, “I am a Fried Egg Sandwich”

This was one of my first DSLR Images taken in 2001, with a 3MP Canon D30 DSLR. The causeway was under construction and it’s now mostly finished. One can only imagine what it was like with the balustrades that used to adorn its edges and are now in the moat or stolen, destroyed by the millennia. 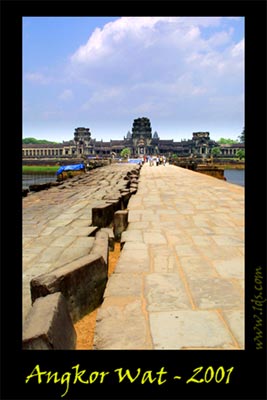 Classic Angkor Wat Picture with one of the reflection pools in the foreground. Note the moon in the sky There’s a carving school and shop in Siem Reap, set up by the French to teach the culture and it’s a thriving business. I have some of the carvings at home; I am looking to get a replica of one of the BAS relief’s on Angkor as a feature in my home. Cheap too (relatively)

Angkor Thom, the temple of 1000 faces is a treat for all Siem reap travelers. Lot’s of places to get excellent photos and marvel at the scale of the thing. Trying to get a less traditional shot, we walked around the library on the right and this shot, with the moon and the deep blue skies took my fancy.

I thoroughly recommend these two places. And both have nice healthy nightlife only minutes away (healthy being relative), albeit of a different type. But enjoyable anyway to have a beer in pleasant surroundings with the other tourists milling about. New friends to meet, new faces to see.

To Thine Own Self be True