The two cities? My homestead of Dalat, Vietnam & Chiang Mai, Thailand. Two peas in a pod if ever I saw them, remarkably similar topography, each the flower capital of their respective countries, each the fruit orchard, each the vegetable centre.

Dalat even has its own Doi Suthep, a Zen Monastery, fronting the magnificent Tuyen Lam lake.

To be perfectly frank, neither comes close to rivaling the magical town of Sedona, Arizona (nothing can compare to that wondrous place) but both are quite something, gems in their own right.

The mountain city of Dalat was founded over 100 years ago by the French; “Lat” people are the local “Minority Tribe” “Da” means lake. Remarkably it is “temperate” not tropical. Rains a lot. When the sun goes in its anorak time, and sometimes the nights are deliciously chilly.

Situated around a gorgeous lake, surrounded by pine forests & waterfalls, the oxygen knocks you flat, as does the sight of the beautiful new Vietnamese architectural style. As I write these new buildings are in the process of overwhelming the former French Colonial city, built in its day in the style of an alpine resort. ‘Tis a fusion of the old & the new.

It’s a romantic city, the honeymoon capital of Vietnam.

Chiang Mai has it hopelessly outgunned for flowers & tourist trips. But my homestead comes to the fore when it comes to fruit ‘n veg Dalat is a small town of maybe 150,000 with all the Jungle, Elephants, white water rafting, kayaking & hill tribe village ingredients to keep a tourist happy for life, but its eco act is not “together” yet. Barely a handful of expats, just a trickle of western tourists its stock in trade is Vietnamese tourists, not westerners. Better English than Chiang Mai though & only been at it a few years. Its people are highly intelligent, its thousands of University students a real joy.

This time last year I was pulverized by the Chiang Mai heat & listened to a British friend explain that in ten years of his Thai marriage the conversation rarely strayed outside of the domestic arena. In Dalat it is cool & the chatter is about Bill Gates, Condiliza Rice and even the much maligned Sven Goren Erikson. 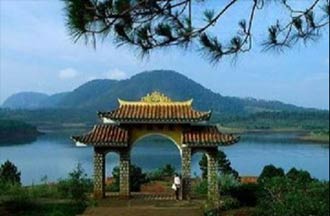 Chiang Mai is a great place to have a rest, put your feet up & recuperate from life’s toils & troubles. When you wish to get plugged back into the mains again come on over to Dalat. It’s a hi-tech ultra-modern city, buzzing with vitality.

Chiang Mai is laid back – Dalat is go go go.

Dalat has a great sense of humor, Chiang Mai has its sanuk.

There is no Dalat equivalent of Chiang Mai’s wondrous night market, and it has no night life to speak of, but it does have a championship level golf course.

Next year the local airport will have an international license. Well ok. But those twin horrors Supermarkets & Shopping malls will soon arrive. Ugh!

It’s wondrous central market will probably see off the supermarket quite comfortably. I hope so. To find the Thai Lotus-Tesco’s devoid of customers brought joy to my heart so maybe there’s hope for us all. 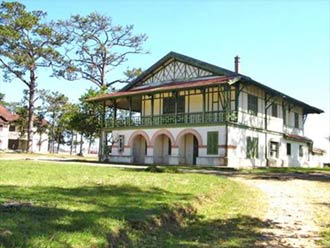 Chiang Mai was the scene of two memorable events for me.

First when I watched a Thai girl tweak a policeman’s rear end and give him an affectionate kiss for his troubles. He was trying to unravel a traffic jam by the day market at the time.

Next, I flirtatiously asked my hairdresser to wear her Llana costume for me. She did! and her assistants too! Cooked me Tom Yum Goong but made it clear that I was “not” her boyfriend so I didn’t, mercifully, slide down a slippery slope.

Can’t imagine such events in “nam. Or anywhere else in the world for that matter.

Then came an unmistakable portent of things to come. First came the much promoted “Festival of Flowers” a paltry collection of floats, not enough to halt my stride. The very next week, just when I was having a much needed snooze, the earth shook with a thunderous roar & dazzling costumes filled the horizon. Chinese New Year.

Reason’s to be Cheerful 1

Notable are three beautiful hand made (silk/polyester ) shirts for just $10 each. which get me stopped in the street every day.

My room is full of local peaches at $1 per kilo, local apples, same same straws. A huge pineapple is just 50c as are the finest pink grapefruits known to mankind. 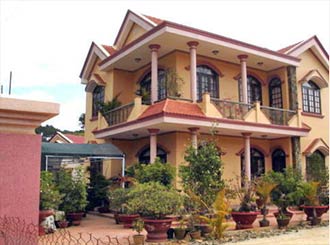 Last, but not least, 8 pieces of Vietnamese smoked salmon for just $3. Brie, camembert, blue cheese & Italian dressing are $1.50 (too expensive).

These are all purchased third party at Vietnamese, not Western prices.

If you go for a private residence then it would be wise to take a leaf out of that man Uncle Frank Visakay’s book (again) and invest in a maid.. Pretty near essential in fact or else you’d be in a fearsome muddle with electricity & water bills. At just $25 pcm + board, food & TV access she’d save you that on groceries alone.

Give her one day off a month & you’ll be a hero.

Warning: If you change the economics of this modus operandi you’ll just confuse the girl & incur the wrath of your entire community. Don’t even think about it.

Don’t know about getting your back scrubbed though, corker of a thought that this may be.

“Such stuff as dreams are made of “ – William S

In Vietnam, not even on your birthday!

Lead to a date with the altar, a karaoke bar & and/or a baseball bat probably.

Hmm… maybe not. Not for the first time I may have misjudged the female of the species, since a couple of my hotel maids have already gotten “touchy feely”.

In the beautiful Island of Camiguin, the Philippines, your correspondent was offered a “maid” deal by two sisters. Cook for you, clean for you, shave you, bathe you, take care of your “every” need. In that shark infested land that might have been the end of me. One hell of a way to go though.

Reasons to be Cheerful 2

I just got a six months visa extension for $80. No reason to exit Vietnam if I don’t want to. But sometimes I do. Chiang Mai is great for a rest and Vietnam gets too busy at times.

Reasons to be Cheerful 3

The Viets have a riotous sense of humor. Robin Williams, in his immortal “Good Morning VIETNAM” got this place perfectly focused. The scene where a grannie sloshed a watermelon with a baseball bat then ran round the bases is priceless. ‘Exactly the way that this place is. But you have to watch ‘em. Conscious of the need to adopt the proper form of address, young old, male female, I enquired as to how to say “hi” to young girls. “Xin Chao Em” shot back my guru, he of the monkey fame, with a grin

But my new found politeness just brought peels of laughter all day. Apparently I had been saying “Hello Darling” to all & sundry. Took me months to recover from that one But this time at least, I had the presence of mind to turn this faux pas to advantage. Switch to the market, pick a grannie “Xin Chao Em” coupled with a grandiloquent bow always brings the house down. Good for a 50% discount too. But still twice the going Vietnamese rate.

Reasons to be Cheerful 4

Reasons to be Cheerful 5

Their sheer competence sometimes astounds. Its no surprise that govt. Hospitals & Dentists are a disaster, but their private medics are leaping to the front of the field.

In Chiang Mai yours truly had a recurrence of an abscess wedged between two crowned upper teeth. Happens every few years & is usually doused by a bunch of antibiotics. Unsure of the pharmacy system I went into a Dental Surgery at Tapae Gate for a prescription. Suggested treatment THREE root canals, TWO new crowns. Twenty thousand baht please. Unaware of the danger to my next reincarnation I cursed the cretinous cur under my breath as I wai’d my way out. But the good Buddha took mercy on me and didn’t hit me with thunderbolts for just thirty seconds later a 20 baht cache of antibiotics from a nearby pharmacy solved the problem.

Then the dental profession got its revenge when one of my lower molars cracked. Difficult problem this. A Phnom Penh temporary plug fell out in one week. In Saigon I was not impressed by two $20 quotes without even a cursory attempt to look at my tooth and yet another temporary plug fell out. In desperation I turned to a resident Yankee Pal, got referred, and had the problem superbly well fixed for just $10. Even chiseled and sharpened it so I could bite. Finest piece of dental work ever inflicted on me. No injections & no pain either. 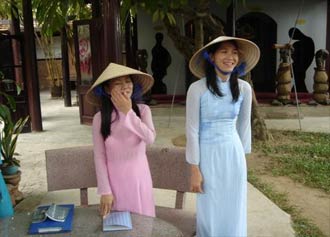 Reasons to be Wary 1

The (highly efficient) & often unpleasant, Vietnamese tourist industry sucks, geared as it is, to local tastes. A good 90% of Dalat’s native tourists take an eight hour bus ride from Saigon, stay one day & then return home, another eight hour coach ride!!!!???? For weddings mainly, but also for “vacations” too.

The natives travel only to see relatives, the concept of a “holiday” is completely alien, so actually “staying” some place for a week or two is incomprehensible to them.

They just love their kitsch, certain parks are buried in a “Petit Disneyworld”, and they head off to them every time, leaving their sometimes magnificent vistas unloved & unnoticed.

This being their custom, unthinking westerners are hurled round the entire country city by city one day at a time, spend most of the time in a coach, eat so so western food & get mauled by the odious “Moto – cyclists”.

If you want to “see” this amazing land then why not do your homework, its well tagged & detailed on the net, visit no more than three cities (including a two day stop at Hanoi or HCMC (max)) , tell the moto-cyclist & “touring” buses to go to hell, eat from the street & clown with the locals, in other words, get off the tourist track altogether.

I sometimes relate to the western tourists (in secret) how to have a memorable day out for just $6, all included. The hoteliers & traders of Dalat just cheer me on, pleased at smiling customers who stay on for a few days more. Plenty of these little trips around.

The Edict, Land Reform And Ownership

“Honey, When Are We Going To Have A Baby?”