"There are a number of mechanical devices which increase sexual arousal, particularly in women. Chief among these is the Mercedes-Benz 500SL."
— Lynn Lavner

Well, that may be so, but the only "device" that would turn your correspondent on right now is a simple cutlery set (knife & fork) which can be smuggled into Vietnamese Lunch parties. Trying to eat slithery noodles with chopsticks
is beyond me & it's embarrassing to have them deposited all over my shirt, trousers & the floor.

The party town of Vietnam is undoubtedly the coastal resort of Nha Trang, laid out quite beautifully by the French with a strategic central market & wide open boulevards, just like Saigon & Dalat. But in Nha Trang, at least, the sidewalks
have been preserved and are not used for target practice on hapless pedestrians.

It has a looong so so beach & average buildings, nothing special. Its setting is markedly better, with a mountain backdrop & gorgeous Islands centre field.

What makes it so special is the magnificent French Boulevard going as far as the eye can see in both directions, a facility that is put to maximum use by the locals. The cool sea breeze & the drier. Not so muggy, heat of the lowlands helps. Still
seriously hot though, at midday the town centre is pretty much deserted, the locals fast asleep. Mad dogs & Englishmen go….

After the traditional one hour battle with the hounds who feast off the tourists "NO! SOD OFF!" we are left in peace. Then its amusing to see the backpacking community pole-axed, "Bo Tay" (I surrender) abandoning, for
once, their relentless trek round the Universe. After the frenetic times in Hanoi & HCMC they just can't resist its relaxed, effervescent atmosphere. Most stay a day or so longer, some stretch it to a week or too. Plenty stay put for
life. Lots of expat businesses here, dive centres foremost among them.

Crack of dawn is the "shaker" time, awe inspiring sunrises across the islands & the entire population in the sea, grandmas, grandpa's babies 'n all. Just like in Ho Chi Minh City there is a mass of female butts wiggling
and a ‘doin their Tai Chi. Young & old, slim & slim. The fellas give their shuttlecocks an almighty thwak.

Doesn't quite match Wellington Harbour on a blue sky day, Universe site numero uno, but still worth a ticket round the world to just see it.

Most bathe in shorts & shirts in keeping with conservative Vietnamese traditions, but now & now & now comes the altogether shocking sight of a Viet girl walking in the street dressed in a bikini, albeit with a towel draped demurely
around her midriff. The times they are a 'changing.

The Vietnamese seem to be terrified of their own police, who, like their international peers, go for the easy pickings. In Chiang Mai it was the incessant busting of the kids with no helmets, whilst standing there blandly watching as two
motorcycles robbed yours truly.

In Saigon your correspondent was inoffensively tucking in to his favorite street food, crab noodle soup & French bread, when a whistle went up & the entire street disappeared in seconds, my table & nosh included. Yours truly was
left to explain to the "boys in brown" just what he was doing waving chopsticks & a spoon in the air. Conducting Beethoven’s 9th? Fortunately Saigon's finest couldn't speak a word of English.

Same same in Nha Trang this week, this time with a gorgeous fruit salad. 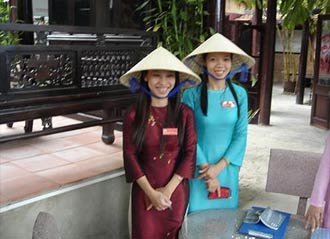 Dark rumors abound of police corruption, but your correspondent was party to only one such incident. A pack of 30 or so brown shirted wolves descended on a pal's prosperous coffee shop. Given that the whole place is wrapped up in red tape, with permits
taking years to get, she would have been easy pickings.

ANYONE KNOW HOW TO PULL THE PLUGS ON THIS FUNERAL DIRGE COMING OUT FROM THE BBC?

Where the hell was I?

Ah yes, sex. According to my internet oracle in days of yore Nha Trang Belles de Nuit would lay out bamboo mattresses on the beach at night from which to ply their trade. Ever one for a paddle yours truly sallied forth for a recce, only to
fall flat on his face three times over young Vietnamese couples doing what comes naturally. Time to keep the peace & head off to bed. En route a pretty Vietnamese girl ventured not "you want boom boom?" but "you want woman?"
She was bemused by my witty "Is the Pope a Catholic?' response. Well it is Papal Territory my dears.

Back in my Dalat homestead lives my Vietnam Guru, a young man attached to the family of the famous Dreams Hotel. Typical Viet, very high IQ , speaks English as well as you & I, but has never left Vietnam. He's got his country clocked,
completely sussed so his word is De Rigour. In Dalat wild monkeys sometimes get into houses & do a lot of damage and just like LOS bar girls they're a good deal more difficult to get out than in. Some time ago his girlfriend's house
was invaded by one of these miscreants & he was deputed to sort the mischievous little primate out. Smooth as a gigolo's hand up a silk stocking he built a bamboo cage with a trap door & summoned us to witness its capture. For this
a bunch of bananas was duly placed in a cage. No fool this ruffian of a monkey, he ruined the plot by grabbing a stick, fetching out the bait with it & sat there cackling. My guru was not amused. Funniest thing I ever saw. Oh how the mighty
fall, we still crack up when we meet. I insist that we do.

The "monkey island" trip from Nha Trang is good value. The Vietnamese are cruel in the way that they tether their animals. Seeing dead eyed Elephants tied to a tree all day just appalls me. But the monkey show is a joy, and they're
not chained. To watch "all sorts" run round a ring on bicycles was a joy, the babies hurtling around at reckless speed & sometimes coming a cropper was a memorable event. Damn, wish I'd got some shots!

There are three hundred female monkeys on that island and only one male. THREE HUNDRED. Ye gods, this aging born again playboy can't even keep even one happy for more than a few hours. Product of a modest income probably.

President Trumans's wife asked, at a rooster farm, how many times a prize rooster had sex each day. Ten times a day. "Tell the president!" trumpeted the first lady. Cool as a cucumber Truman enquired as to how many hens the
rooster performed. Ten different hens! "Tell the first lady!" triumphed the president.

Not for me this thing called marriage. I quit. Bo Tay! Surrender. See out my days alone now. Keep the peace.

On the internet. Characteristics of a happy marriage. "She" should be blind. "He" should be deaf.

With me at least. Quite so.

I confess that in Nha Trang this week things got a bit fraught at times, me being unused to being thrown back on to the tourist circuit with traders trying to charge 10 times the going rate. Bugger off! Thick Dua! (joker) But the vivid humor,
the local good nature soon came to the fore. I was caught by surprise when adjacent tables had twice paid for my meal & on the last day my breakfast bill was halved, normally, just 25c baguette, 25c coffee. Gee thanks guys. Didn’t get
a hug off their “Congai Dep” (beautiful daughter), but I can dream. Yes sirree I can dream.

On the journey to & from Dalat I sat with college profs from Melbourne & Montreal. Both confirmed what I already knew. That Vietnamese students are annihilating the field in the Academic world. They don't join in the social life,
not good, or the sports, even worse, but best of the academic breed they are, by dint of sheer hard work.

Something remarkable is going on in this amazing country. I fear for their future given their obsession with money but boy is it exhilarating to be here right now.

At a guess, they are surpassing LOS in the economic stakes as I write. In years to come they'll leave it for dead. No contest. RSF 30 secs into round one.

It’ll be another Hong Kong or Singapore before you can blink. Not necessarily good.

This is a nice series – and should serve as a reminder to readers that stories from surrounding countries are always welcome.