For those of us into pursuits other than chasing denizens of the Bangkok night (although this pursuit should not be deemed to be unworthy, I just believe it should be kept in perspective), there are a few gems around Bangkok and it’s surrounding
provinces that many readers don’t get to see or hear about that are worth visiting more than once. Some of them are well know, but there are some small tricks of the trade (for photographers especially) when getting around to the more (or
less) accessible areas. Remember first that being “public” in Thai means that you pay your fare, or entrance and you’re quite restricted, BUT, and I mean BUT, the palming of B500 or B1000 can get some very interesting scenarios
enacted. Take for example one of the many snake farms around Bangkok and its surrounds. With the right kind of persuasion, you can get really close to the animals, relatively safely (he he).

A warning, of course, that you shouldn’t be doing this with a Point and Shoot camera. The photo above was taken using a 70-200/2.8 image stabilized lens. I remember too when he struck at me while doing this, I put my back out. It was quite a comical
affair. These babies are the full bottle and he could do me some damage. My photographer friend tried a different approach, by rigging up some gear and a remote control. It’s pictured next, and he got some “really” up close
and personal stuff. This would NOT be available to general public outside Thailand (or inside really….) unless you are able to modify your status in some fiscally pleasing manner. 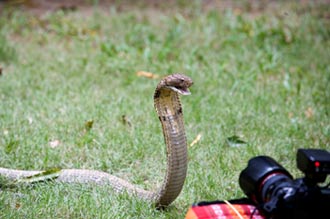 Pretty amazing stuff. An experience you could only really have here. Some would say “why”, and I guess if you’re a bit of an action or adrenalin junkie, this is for you. Your Thai friends will clearly think you are made with the scenario
above, but that’s part of the point really. So that’s it for snakes, we’ve yet to go back and do this with better lighting to get some more striking photos, but it takes a while for me to convince the boss (she who f#$%ing
hates snakes) to go back there for more.

Another place we find amazing to take photos, is the Sri Racha tiger Zoo, on the way to Pattaya. This is full of all sorts of weird and wonderful events, but we pay our money for one thing and one thing only……. TIGERS!! This zoo has many
enclosures full of tigers of varying ages. It has tigers with pigs and dogs… go figure. But we aren’t looking for the trite portrait of a fat old tiger chained a foot from the ground so he cannot move. We’re looking for the sort
of tiger shots National Geographic spends 100’s of 000’s of dollars trying to get. My good friend CD put me on to this place. It is now one of the most visited places by us when we’re needing a photography fix. In fact, I
met CD at the Sai Thip Butterfly Park (a few Km’s north of SRT Zoo), and our discussions led us to Sri Racha. One of the things we observe in Thailand is that the locals and the tourists tend to go to the stock standard shows and never
really spend any time having a good look around. It’s amazing to think that when we sit in this spot for around two hours (timing is all important for these shots) we see probably 20-40 people. Now the car park, full of cars and buses points
to around 3-5000 people in the park, so this means we’re in undiscovered territory. Suits us, as we want the good positions (of which there are many) to ourselves, free to move around and get the angles we want. Here are a few examples
(and I have digitally altered some of them into Black and white composites for effect.)

If you have a love for Tigers, you may have heard of the Tiger Temple (www.tigertemple.org) . This is one of the wonders of Thailand. I think that in the not too distant future, the practice of letting these babies out and having us up close and personal
will be a thing of the past. We have many wonderful memories of this. It’s extremely scary to get so close to a predator like this. But wow, where else in the world? No chains. No fences. No cages. There’s just a monk (the Abbot),
a few protégés, some local/farang helpers and a steady trickle of people coming in for a look. No tour buses, no yobbos (it is a temple after all) and it’s all based on a donation you with to make. This is where it may become
a victim of its own popularity. Once they have enough money, they will set up a proper sanctuary for these magnificent beasts. I think that will be the time that the “free range tigers” era will be lost. I am so glad to have done
this many times. Must go again soon…. Plus you can do hellfire pass and River Kwae while you’re there. Good food and accommodation abounds. The River is a pleasure. So get down there, camera in hand. Here’s a snap we took of the
Abbot and his main charge;

The background sucks on this photo (they do this in an old abandoned quarry), so I did the background in Black and White. I think it improves it. 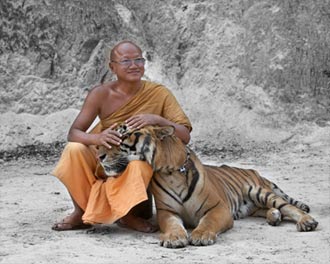 Well that’s the first edition of this. There’s more coming soon as I wade through my archives of photos. We’re always looking for ideas, new locations, so please contact me if you have any. I’ll gladly (as will my GF and CD)
head in that direction and photograph it. We’re always happy for other photographers to joins us too.

Those tigers are magnificent!