The New House in Isaan

If you happened to pass by Talad K yesterday you couldn’t help but notice the brand spanking new house standing proud in the village.

Wind the clock back 6 months. Khun NA (of “My Khao Lady” fame) is in Kuala Lumpur for a few days of R&R before winging her way home to Krungtep. She had been attending to business in Singapore. We met at the Renaissance
Hotel where she was staying to go over the paperwork and for her to brief me on the business in Thailand. After taking care of business, we were able to relax over a Singapore Sling. NA unfolded her grand plan to fulfil a goal she had set for
herself; to build a new house for her family.

NA has been scrupulously hoarding the odd spare baht to build a new house for her aged mother, a home for her son and the orphaned nephew and niece she had taken under her wing. She confided that she was close to her savings target that would allow her to start construction without resorting to loans. The old house had a thatched roof that had more 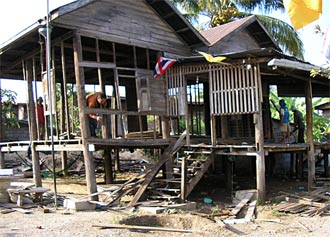 holes than a sieve and the timber planks for walls had seen better days of some 3 generations.

She sought my opinion on how to approach the project. I was rather dismissive in reminding her of our understanding; that is she deals with her problems. I merely advised her to apply the business knowledge she had acquired over the last 2 years or so and rely on her instincts. I stipulated one rule: she must have clear title to the property. NA had apparently done her homework and approached the development as a business project. She researched widely, attended home shows and interviewed a number of builders including family members who are in the trade and have been putting their hands up for a piece of the action. After viewing some houses constructed by various builders she settled on a builder from Korat that came recommended. This decision was much to the annoyance of villagers and family members who were hoping to be gainfully engaged in the construction. It was a difficult one to make as it set the tongues wagging in the village.

Two weeks ago, I was invited to view the almost finished house. I had declined previous invitations as I felt that the village folks would credit me (the foreigner) with the building project. This time curiosity got the better of me and I accepted the invitation. NA had hired a car and driver for the trip. I noticed that costs had gone up quite a bit as a result of higher oil prices. It was a new vehicle and I was relieved to see that the man behind the wheel was not a young racing hoon but a mature driver. The seat belts seemed to have lost the buckle end of their fittings. So the car made an unscheduled stop at a service station and the rear seat removed to reveal the hidden fittings. With seat belts securely fastened, I declared that I was sufficiently “sabaii” to begin the journey. Some 3 hours later we pulled into Korat for a coffee (Royal something café). We did a quick tour of the city taking in the history lesson left behind by their famous woman warrior. The city was awash in yellow – in homage to the 60th year of the King’s reign

Talad K was indeed a market, a small village where the older women inhabitants gathered round everyday to gossip or otherwise while their time away. No one appeared to be working. Progress seemed to have passed this village by. Nevertheless it boasted of a new pre-school, a recent Government initiative to the rural people.

The villagers gathered around the car as it pulled up, with various people calling out to NA at the top of their voices seeking to be noticed. The house was a substantial building and the builder had lived up to NA’s faith in him. It was a quality construction by Thailand’s standard with the materials and fittings used at the higher end of the cost scale. I was suitably impressed by this slip of a girl who until a couple of years ago had only the benefit of the briefest of education but is now a sophisticated young lady adding impressive business savvy to her repertoire and travelling abroad to do business with consummate 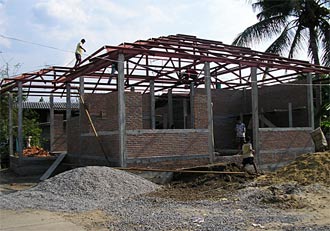 ease. There was nothing pretentious about NA as she waied the toothless older villagers in respect and acknowledged one and all who sought her attention.

The house was well constructed; it stood out from the other houses in the village. NA had got the mix right. She explained that she wanted a modern brick house but had not endowed it with the level of sophistication one would expect to see in Bangkok as it would be housing her rural family members who until now have only been used to the barest of necessities to sustain life. They have never seen a shower! A bucket of water thrown over the shoulders in a lean-to made from sheets of tin cut from drums with a gunny sack draped over for a door. The new house was a compromise between what NA has become accustomed to and what her Isaan family is capable of dealing with. Her concession to interior designed comfort was to build a large self contained room replete with en suite, for when she is in Talad K and the occasional adventurous visitor looking for a taste of rustic Thailand. Overall the I was most impressed with her attention to detail and her decision to built a house practical to the needs of the family instead of a white elephant of her dreams.

I made a small suggestion to enclosed exposed electrical wires in conduit and encased under plaster. This meant rewiring the house and channels cut into the plaster. The builder who understood more English than he spoke, explained that he would normally have hidden all the wiring but the late request for additional electrical work after the walls had been plastered meant that some wires were exposed.

The greatest reward was just to see the happiness in the mother’s eyes, that her daughter 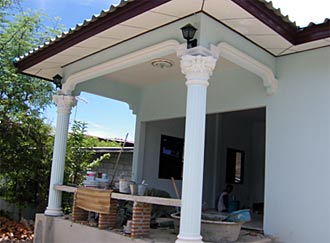 was able to make good her promise to one day come back and build a home, when she left the village to seek her fortune in the big smoke.

I was disappointed to see envy in the faces of the neighbours. I was mistaken in thinking the village people would have been proud of one of their own doing well.

It was lunch time and we drove to a local restaurant famous for its duck dishes. The meal was acceptable but nothing to write home about. I wanted to visit the local kilns famous for its pottery, hoping to find a rare piece of art. I was in for a disappointment. The trip to the archaeological digs made up for it.

I guess this essay is one that is not bogged down with the issue of titles, dummy companies and double dealings that appears to be a common thread in a number of the articles published. This is another side to Thailand that should be allowed to see the light of day.

And by the way NA is steadfastly working towards her other goal:

• A university for a degree

I hate to say it, but what I will remember about this submission is the point you make about the envy on other villagers' faces. Now really, that is not fair because this was a nice submission, but to me, that is so often what I see here.

Today I Am Dirty, Tomorrow I’ll Be Just Dirt