In late December 2005, J was working as a go-go dancer at the KISS bar at Patpong. She had been working there for 9 months.

I met her as a customer and paid her 1,500 baht for one night and another 500 baht for the bar owner.

I asked her to go with me to Pattaya to celebrate New Year and we took her friend B. I paid both girls 1,500 baht per night and also paid the bar 500 baht for each girl for each night. I paid all hotel costs, meals and gifts.

When we got back to Bangkok, I talked about whether she would like to stay with me all the time. She said OK and I rented a condo at Klongsan and bought a BMW for her to drive. 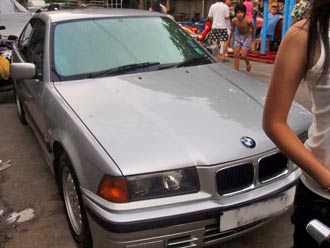 I also agreed to pay her 25,000 baht every month for herself. I paid her that money in January, February, March, April and May 2006. She said she was not working after I paid the boss his money.

We went to Chachoengsao in early January 2006 as she wanted to visit her parents. I had to go away for about 2 hours and did not meet them. She said that her parents did not know that she was working at the go-go and she did not want them to see her with a farang.

We talked about marriage and she said I could come to see her parents in February 2006, on my next trip.

I went to see them then and J had told me that her Mum would ask for 200,000 to 300,000 plus some gold. In fact, her Mum asked for 400,000 baht plus 10 baht in gold and I agreed without any argument or discussion <BIG mistake this. This is WAY too much for a girl who worked as a hooker, and it is the norm to negotiate the figure – Stick>

We went back to Bangkok and went to a temple to see a monk and he suggested 3 dates, two in March and one in June.

J wanted to marry on 10th March 2006. I agreed and went back to NZ. When I arrived, I found that I was sick and was taken to hospital for one week. I could not go for the wedding but I gave J 100,000 baht to pay for everything anyway, as she said it was too 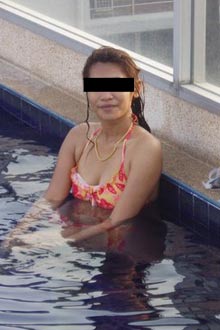 late to stop people coming. My friend Sukanya went to the wedding day to tell my story about illness.

J changed her name to P at that time.

I went again in April and saw parents again. I gave J another 150,000 to give to her parents.

I went back to NZ and one day when we were talking on the phone, J said that her parents were afraid to show big money on the wedding day so maybe on that day they would not show all 400,000 to the guests.

I went again to Bangkok on 22nd May 2006. I was busy on the 23rd and morning of 24th but in the afternoon we went to Chachoengsao. We went to the wedding clothes shop with her older sister then they took me back to the Wangtara Resort hotel about 3 PM. I wasleft there alone until Thursday morning when she picked me up and we went to practice the wedding ceremony.

After practice at about 11pm, she took me back to the hotel alone until the next morning when she picked me up for the wedding at about 7am.

This time I paid another 7,000 for clothes hire and another 33,000 baht on top for music, photographer, drinks and food. I was told that outside caterers were coming to deliver food and I was surprised to find that friends and neighbours were doing the cooking. I doubt if the real costs were more than 15,000.

I arrived and changed and then J tried to stay away from me as much as possible. If I moved near her, she moved away again.

The 9 monks arrived about 9.30 am and the ceremony began.

I noticed that there was only about 80,000 baht and 10 baht gold shown on the plate, which was in front of me. I remembered what she had said about not wanting to show all the money to the people in case somebody came back to steal it.

J then went and changed into very old clothes and I changed and went to sit down with some guests.

Then they left and I asked to be taken back to the hotel as it was too hot and I had a bad feeling about everything as J told me that she to stay at her parents' house. She said that her parents had given her to a monk when a baby and now they had to do something with her at temple. That was 2pm.

I was left at the hotel until 12 noon on Saturday, by myself. J picked me up and took me to the parents' house. After about 10 minutes hanging around by myself, I went to look for her and found her with her parents and her older sister having a secret talk in her parent's bedroom.

I said I wanted to go back to the condo and maybe I would go back to NZ early, on Monday.

So after 5 minutes we got in the car and drove to Bangkok. J said she had a toothache and did not want to talk. She was very quiet all the way.

When we got to the condo, J lay down and watched TV and had nothing to say.

We went to bed about 9pm but she had complained all day about toothache and she was sleeping far away from me.

J got up at about 8.30 am and lay down on the couch to watch TV. She said she had toothache. She did not want to talk about anything.

So I can know everything is bad now.

I went back to the lounge and thought for 5 minutes about what to do.

Then I went back to the bedroom and suggested nicely that maybe she wanted to go back to her parents' house that day as I was leaving the next day. She immediately said that I wanted her to leave the condo, that I was kicking her out.

I said I did not want her to leave me but I could she was not happy so it was OK if she went to her parents. She again said that I wanted her to go and I said no, but now after her words I thought she was going to leave the condo for good after I had gone to NZ.

She said I was talking very bad and OK, she would go.

She went next door to her friend's condo room and they came back together and got her clothes. J took my phone to call her parents.

Then in 5 minutes she was gone.

I saw her about 3 or 4 times after that at the condo but she did want to say anything to me except talk for a short time about somebody coming to pick up the broadband things.

I saw her about 2am on Wednesday morning at the convenience store outside the condo and she did not say anything. She appeared to be in a Honda car outside with another man.

The Manager of the condo told me that another man had been visiting her when I was away plus her young friends. It appears that she has at least one other boyfriend. (This photo was found on the computer.)

I forgot to lock my bedroom door on Wednesday night and I fell asleep watching TV at about 12.30 am Thursday morning. I could see the condo door clearly from my bed.

At 2.30am, I woke up and could see that the condo door was open a little.

I got up and went to check and turned on the light. I could see that my carry bag was missing.

I ran down to security at the front desk to check if he had seen anything. Then I went back and on my way I checked a storeroom and found my bag with the wallet but cash gone. My passports were there but everything else was gone. I went back to the room and had a look and found that the mobile phone at the end of the room was also gone. That was a long way from the door and not easy to see in the dark as it is a black model.

Whoever came into the room must have known what I keep in my bag and where I keep my phone.

I then went to check again with the security guard and he said that only 2 people had come to the condo between midnight and 2.30am. One was a Filipino singer from Peninsula Hotel and the other was J, who had arrived back at 1am on a motorbike. He said she went upstairs then came down after a short time and gave an envelope to a guy on a motor bike. Then she went upstairs again.

It looks like she was not happy to just have money and gold from fake wedding but wanted everything she could get. She also kept the 7 baht of gold that I had bought for her from January and April.

Yes, it's all real. Stupid bitch really, if she had stayed with my business she would have made 1 million baht a year for herself from about 2 hours a week work.

I was about to buy a Benz in place of the BMW that I bought for her to use.

She can sit on back of motorbike taxis now!

Anyway, I was the author of my own misfortune.


This is actually the second time this has happened to me. The lady that I was seeing for about 3 years told me to take a jump in November. I had paid 1 million deposit on a house in Ayuthaya and another 300,000 baht deposit on a townhouse nearby, furnished her new townhouse from top to bottom in Saphan Sung, almost paid completely for a new Izusu Adventure Master, bought 2 motorbikes, new computer etc etc. The last bit she grabbed was help with a deposit on a new Isuzu pickup for her Dad, 170,000baht

Too much money and too little brain!!

This is the classic bargirl rip-off story. It shows well that no matter how much you give them, it might simply never be enough. It shows that they can be prepared to marry to rip you off. And it shows that they can have a Thai boyfriend on the side who is happy for them to be stringing along a farang boyfriend. This is a classic scam – and one that happens all too often.