Are you coming to Thailand? Here are warnings about two of the common scams you might face, especially in Bangkok. They are the fake money scam and the waiting-taxi scam.

I live in Bangkok. Fake money is starting to appear in the city, and, probably, up-country, too: fake 1,000 baht notes. I've inspected one of these fake bank notes. The quality is far too poor to warrant the term "counterfeit".
These are merely photo-copies or laser prints. However, the casual, foreign tourist might not know the difference. Here is information to help you spot the fakes.

The largest note of Thai currency is the 1,000 baht note. Now, in April, 2006 that's about US$ 26, Aus$ 36, Euro 22. To get Thai currency, most tourists will use ATM machines or exchange windows operated by Western Union and the banks.
No worry there. But some
tourists might exchange money at hotel counters, especially the small, cheap, hotels and guesthouses. There be very careful.

In addition, there is an obvious scam with this fake money. It works like this: In a bar, after a few beers and lady's drinks, Mr. Punter pays check-bin with a genuine 1,000 baht note. He places the bank note in the normal cash folder
or on the little tray, which is then carried off to the cashier's desk. A few moments later, the service girl returns with a sad face, "Sorry, ka, but your money no good!" What is then handed back to our punter — with a sad smile
of regret — would be a fake 1,000 baht note. Try to explain or complain your way out of that one, while unsmiling security men hover nearby!

You gave them a genuine 1,000 baht note. They gave back to you a fake. And now, of course, you still must pay your "check bin". Clever, what?

Here are four ways to spot this fake money, and two of them will work in a dark bar.

1.) All banknotes in all established countries bear a "watermark". This is a vague picture which is actually embedded into the paper fibers when the paper is being made. A watermark can not be faked with an ordinary copier or laser
printer. 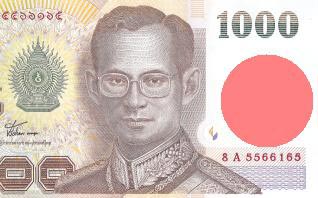 The easiest way to check for a watermark is hold the note up to light and look thru the paper. In the picture here, the watermark area is shown by the pink circle. All Thai currency has a similar watermark in the same area of the note. The image is the
face of His Majesty The King. If there is no watermark, it's a fake.

2.) On the obverse (back) side of the 1,000 baht note, you will see six, narrow, silver bars. In the picture below, look in the area shown by the red oval. These silver bars have a metallic sheen. 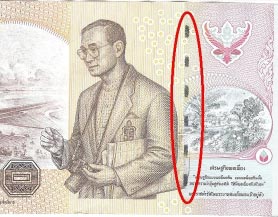 Silver is difficult to produce on common copiers and laser printers. It's possible, but not common. The fake note I saw did not attempt to print metallic silver. On the fake note I inspected, the six bars were dark gray, almost black, with no metallic
sheen. No silver bars, it's a fake.

3.) The next test you can do in a dark bar. Rub the note between your thumb and fingers. On a genuine note, the feeling will be smooth and dry. That's because the ink is pressed into the paper fibers under high pressure. You can't
feel the ink.

On the fakes, the ink is deposited on top of the paper in a thick layer. It feels slippery, somewhat greasy, almost oily. Anyone who knows the feeling of greasy wool knows this feeling. Greasy feel, it's a fake.

4.) The final test can also be done in a dark bar. The paper feels soft, limp, flimsy. If the fakers get more sophisticated, they could use better paper, but on the fake note I inspected, the paper seemed like 99-baht-a-pack from Makro (very
cheap). As I feathered the edge with my fingernails, it easily frayed.

On genuine bank notes the paper is made with strong, linen fibers. It feels stiff, thick, substantial. The edges won't fray easily. Flimsy paper means it's a fake.

Now, on to the second scam.

This is a warning to avoid any of the "waiting taxis" in Bangkok.

In Western cities where there are proper taxi ranks / queues in front of most hotels and large malls. You can get into any taxi and expect to get to wherever you are going for an honest price. But here in Bangkok, taxis waiting on the street
are often a pricey scam.

In the tourist areas of Bangkok, outside most hotels, there are often a few taxis waiting. The drivers approach people leaving the hotel, touting for taxi fares. Those waiting taxis are the ones to avoid.

The common openers are, "Where you go, boss?" or "Hey, boss, you want taxi?" When I shake my head, "no", the taxi touts often pull out small pictures, furtively cup them in their palm to aim at me, and in lowered
voice say, "Hey, boss, you want massage? Pretty lady!" That gives you a clue to their strategy.

I have watched and listened as the taxi-touts quote 1,000 baht to the airport, when the normal fare from the area would be around 300 baht. Yet, many tourists will accept that fare.

I have watched day after day, month after month, as the same drivers loiter around the front of the same hotels. How can they make a living and pay their taxi rent if they are waiting on the street most of the time? The only way is to charge
very high fares for the few riders they do get.

I have seen a few "pirate" taxis waiting, too. Painted in taxi colors – usually yellow and green, but without meters in the front window. Looking carefully, I can see that the "taxi meter" sign on the roof is crude, probably
home made, and looks easy to remove.

I have watched as the taxi touts approach obvious tourists, engage them for a trip while standing next to a regular taxi, but then shuttle the travelers to "special taxi" which is just an ordinary car with no taxi markings. And
no meter!

When I am with Thai friends, those taxi touts never approach. My Thai friends all seem to know about this taxi scam. When we go somewhere in a taxi, the Thais always walk to the curb and wave down a moving taxi. They never, ever, get into
a waiting taxi. I've learned

to do the same.

The only exception to this is at locations where 99% of the people are Thai, not tourists. For example, at Tesco / Lotus stores there may be a taxi or two waiting at the entrance during busy hours. Those drivers do not approach people, they
merely wait patiently. I've never had a problem in that situation.

I hope this information is helpful to anyone traveling to Bangkok. As for living in Bangkok, I love it here, but, alas, it's perfect.

Delightful Cambodia - You Are Welcome (3)

The Outside Looking In