This would have to be the biggest joke I have encountered in my life, trying to get a Thai driving license for car and motorbike. Normally I am quite patient, however the clowns at the Department of Transport in Pattaya pushed me to the limit.

I researched, went to the immigration department (which was a joke as well as I wasted three hours to get two documents needed) got all my documents ready and headed off to the Department of Transport.

I have a business to run in LOS and I allocated half a day for this task. I expected to get some grief over getting my motorbike license; however in the end this was not an issue.

When I first walked into the office they had a couple of desks Hodge podge downstairs and I asked where do I go to get the license underway? I was promptly told upstairs. As you get to the top of the stairs you look straight ahead and on the wall is a
set of posters that explain the procedures that you go through. 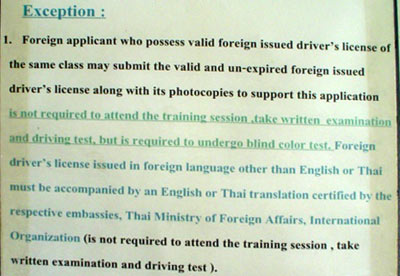 Now at this stage all is fine and I go to the table that everybody else is going to and a lady gives me an orange ticket. Thais were given a yellow one for what reason who knows. Then I sat down and waited for my number to be called. Not speaking very good Thai yet, I was helped by some friendly locals when my number was called after about 10 minutes.

Up to the counter I go to get the ball rolling. Then I was faced by the saddest looking guy I have seen in my life. I think these Driving Instructor people all round the world are the same. They are would be if they could be coppers and are pissed off with everybody they encounter. He instructed me that I needed some extra documents that I could get across the road and that I was to come back at 10.30 am. I promptly went over and got the documents and had a feed as it was a half hour wait. Then back upstairs I went and sat down for my number to be called.

If you look closely at the picture of the poster that is on the wall, you will notice that if you are the holder of an International or valid license from your own country you do not need to do the written and practical tests. What a load of crap. Be
prepared to waste nearly a day to go through the most stupid rigmarole you will ever encounter.

First they sit you down in what resembles a classroom and the seats are about the size that a ten year old would use. They have the little table attached to them. After about fifteen minutes we are all called up and shown how to do the first, second and
third test. The first test involves sitting on a stool, using your right foot on an accelerator pedal, you watch a green light and when it turns red you have to brake before the green light goes into the red lights. Half the Thais failed and they
had to have at least three goes at it. Then you are handed a box with a green and red button that controls a little moving pole inside a large box with a window. You need to hold down the green button until the little pole moves forward and comes
into alignment with the stationary pole inside this box. Child’s play, however half the Thais failed this and the guy in front of me reeked of grog and I suspect that he was still pissed from the night before. After this you put your nose
on a metal plate and look straight ahead at a yellow dot. Two lights on either side of your peripheral vision are changed and you need to tell them what color. I knew I would get crook from this as the plate was wet after having many Thais do
this before me. Sure enough I got some sort of bug in the next two days.

Two other Farang and I were then put in front of a TV to be told that we had to watch a 1 hour video. What a complete joke and insult to our intelligence. What the hell do the authorities think of us? This video belonged in a grade three class. We were
bombarded with stuff like, use you blinker to turn. Don’t pass on the inside left lane and speed limits and they showed us what that meant on the speedometer. The bloody video was sending us crazy and many jokes were starting to fly around
when a lady in uniform told us to be quiet and watch the video as we where going to be tested on it. I couldn’t believe my ears. The Yankee English teacher that was one of us three started to get the shits and so was I. After the test which
we had to do two of (both were the same), one for the car and the other for the motorbike, we started to complain.

Well anybody that has spent some time in the LOS will know how much this will help your cause. Now we head downstairs to do the practical. They have an area out the back of the main building that is something of a go kart track. It had traffic signs,
zebra crossing and other related stuff. After taking a walk around the track I then sat in the shade and waited 1 hour for the motorbike test to start. An assistant asked me if I had a car and if it was manual or auto. Now I don’t know
about you, but I can only drive one vehicle at a time and I found out that the Yankee was in the same boat. We were quite pissed off at this stage, however we discussed our dilemma and we offered each other our vehicles. My motorbike for his car.
Then I realize that his car is auto and I wanted a full license. Luckily I had a mate who owns a business nearby and after ringing him he agreed to lend me his manual 4×4. He arrives at the time the motorbike test is to start and I park his car
second at the front so he can get away for his business.

All the motorbikes line up in what resembled a race and off we go. I just followed the Thais and rode around the track in procession. I pass and I am asked with all the Thais to go upstairs and pay for the license and at the same time they start the car
test. Now I get frustrated at this stage as I wanted to do the car test and give my mate's car back. So I race upstairs and pay for my motorbike license and then quickly get back downstairs to do

my test. I missed half of what the first Thai driver does and someone says, just drive around, use your blinker and put the seat belt on. Now I have been driving for 30 years and I drove around quite confidently that it was only a formality. I failed.
No one would give me an answer and I was given a ticket to come back next week to do the test again. I was ready to belt someone at this stage and I just wonder if anyone has cracked under the idiocy that happens in this country.

To add insult to injury, two guys arrived with a fellow from one of the Expats Clubs and they were in and out within one hour and no test. I am not interested in joining these types of clubs as I find them mostly boring and full of retirees. However I
would join just to get the benefits that they claim to offer. To be continued – as I do my car practical test in a couple of days.

It seems that what is required to get a local driving licence, and the way it is administered, varies from location to location. And there is no way that passing the drivers licence test in Thailand means you are prepared and ready to drive on the roads here.

The Education Of Mr. Lucky