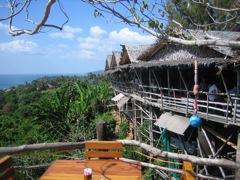 A friend from the European continent came to visit last week and I took on the role of chauffeur and tour guide for a few days. It was a lot of driving, since Phuket
is a big island, but it was a pleasure really. My life doesn't usually have much direction unless I'm doing something for a friend. His visit was precipitated by the fact that he fell in love with a Thai boarder at his house, so he was
here to absorb a bit of her culture and gain a deeper understanding of her personality.

One afternoon I took my pal and his girl to my favorite lunch spot, a grass and bamboo hut stapled onto a hillside above Kata Noi Beach. The builders had used the trees growing up from below the place as supporting pillars, with the result that the whole
restaurant tends to wave precariously in the breeze. The music and decor is all Jamaican Reggae and the waiters sport dreadlocks and t-shirts proclaiming their love and admiration for Bob Marley, Peter Tosh, His Majesty Emperor Haile Selassie
and the smoke of burning cannabis. A sweet bunch of guys who are always polite and smiling.

The food there is excellent. It comes hot from a rustic country kitchen that is not much more than a couple of burners hooked to a tank of gas under a corrugated tin roof. Despite its humble origins, the food is superior to any Thai cuisine I've
been served at the country's various up-market hotels, with the additional benefit of not being toned down for the bland palates of Western tourists.

Along with a big glass of any kind of juice I could want – watermelon, coconut, lime, mango, papaya, banana – I'm in culinary heaven for under three US bucks. Man, just writing about it gets me drooling. I guess I'll be heading back there later
today.

The icing on the icing is the restaurant's locale. Teetering high on the verdant jungle

hillside, it stares out over the Andaman Sea into a creepy blankness. Somewhere out there is the Indian subcontinent but it is almost easier to believe that, where the sky touches the ocean in a fuzzy white haze, in the words of the cartographers of yore,
"Here lie monsters".

I arrived at the restaurant with my friend and his girl and parked on the edge of the road as near to the cliff as I dared. The truck was still well on to half the lane but, in Thailand, questionable parking practices are the norm. Mai pen rai.

My pal had a bit of trouble finding food that would not strip the lining from his stomach, since he had a problem with his gut from eating poisonous mushrooms a few years back. Ginger chicken filled the bill though, and he happily tucked in while I enjoyed
a mango smoothie and a plate of chicken with dried curry and coconut sauce, no additional peppers necessary. 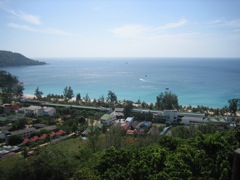 As we admired the view, he looked down on Kata Noi Beach at the small streaks of white feathering around just beyond the surf. "How much does it cost to rent a jet ski?" he asked.

I told him it would be around US$30 for as many minutes. After converting that to 17 Pounds Sterling, he decided he wanted to give it a go. Down we went to the beach and I dog-paddled around in the waves while he and his girl zipped around the bay.

I could easily understand the attraction of rocketing around the warm Andaman waters for a visitor from a country where hypothermia is an issue. So, I refrained from commenting to him on the jet ski situation in Phuket. Sorry, man, I didn't want
to rain on your parade.

Regular as clockwork, tourists and Thais alike are clobbered by jet ski operators. I'll include links to a short list of recent incidents at the end of this story. Just a couple weeks before, a Thai hotel worker was killed by a European tourist who
smacked into him while he was spear-fishing with a snorkel and mask at Kamala Beach. The European hopped back on his craft after the accident and raced off, leaving the country soon after.

The Thai operators of these infernal machines do just as much damage as they race around like madmen through waves crowded with swimmers, trying to attract the attention of potential customers with outrageous stunts. I expect there are many accidents
that go unreported, due to the power of the local mafia since, before a report gets to the Thai media, it first has to be put to paper by an honest policeman (good luck – they've recently been caught covering up another rape in Koh Samui,
as noted by Stick).

Aside from the danger to both users and swimmers, the jet skis are a blight on the sights. While two or three guys test their testosterone levels out on the bay, a couple of thousand beach goers get their idyllic tropical dreams of azure waters trashed.
They should at least be limited to Patong Beach, which is ugly already.

The Phuket governor has vowed on several occasions that jet ski licenses will no longer be issued. Since the current licenses will be valid for no more than five years, we are supposed to be free of the evil machines by 2011. However, the governor's
vows seem to change depending on who he is talking to and his sincerity might be called into question given that he has agreed to host the 2006 World Jet Ski Championship at Patong Beach.

The most worrying thing about all this is the underlying fact that tourists are often in much more danger than they know when visiting Thailand. Many tourists come from lands where governments regulate any activity that might remotely be considered dangerous
and where people win million-dollar lawsuits over the lack of warning labels on a cup of hot coffee. So they automatically assume that, if they're allowed to do something, it must therefore be safe.

Nothing could be further from the truth in Thailand. If you're allowed to do something here, it is merely because one or more Thais will make money if you do it. Rent a motorbike without a license? Sure! Never ridden one before? No problem! Helmet
messes up your hair? Don't wear it! Incidentally, the cops will fine you for driving without a license or helmet, but you can pay your way out of that and you'll be relieved to know it doesn't cut into the bike owner's profits.

A frightened elephant can whip a tourist off his back and stomp him into the ground and they sometimes do, but no one will tell that to a tourist with a fistful of cash. On a daily basis I see tourists pushing babies in strollers down the middle of busy
lanes, piling on to overloaded watercraft, dangling in the sky from kites, riding inflatable pontoons dragged around by motorboats, strapping on scuba tanks and submerging in the currents, and renting questionable girls off the street and strapping
them on too.

I get the unfortunate opportunity to witness the deadly results of this blind trust in authority on an almost weekly basis, as there are more than 1,000 road accidents in Phuket every month, overwhelmingly involving motorbikes. The unmistakable crunch
of motorbike plastic on the road outside my house is a horrible sound to hear in the middle of the night. It's lucky that I harbour a fairly dark sense of humour and I think lemmings are funny.

In the end, my friend survived his vacation. Despite renting both a jet ski and a motorbike, he was responsible and careful (and lucky) in his vehicular adventures and enjoyed his stay in Phuket. In fact, he loved the unregulated freedom.

Perhaps for many, a trip to Thailand is like when a lazy babysitter takes over for strict parents. It's all fun and games until someone loses and eye. Any responsible travel agent should urge their customers to watch their own ass because, in Thailand,
no one else will.

There is an important to message here.

Oh No, Not Another One!