The wild orchid most beautiful, delicate and fragrant of flowers is best found growing in the harshest and cruelest of conditions where it flourishes best.

There are no secrets in the village. Everyone knows everything about everybody. The money they earn, what they spend it on, who is a good person and who is a bad person is all quickly worked out. I very much doubt you could conceal anything in this place. Thais have an ability to see the smallest of detail and work out its consequence or meaning beyond our western comprehension.

There is an area in the northern end of one village known as "mia farang corner". It's where all the Farang have come to live with their Thai wives in houses they have built, some costing up to 7 million baht. To the villagers everything about everyone here is known, the houses are magnificent in stark contrast to the wooden Thai shacks still scattered around them. Everyone knows the wealth and disposable income of those in mia farang corner; you can almost see it in the eyes of the young.

But all is not good in this corner of the village. There is very little for these men to do each day. Many Farang are finding it increasingly harder to stay in their little man made utopia and last year alone, 3 abandoned their life in this area of Buriram and the houses in their wife’s names.

The tiny village primary school I visited could best be defined as impoverished with decay and in very bad need of funding. I dare not even guess when it last even had a lick of paint. There are no computers in this place and teaching is done the hard way by 5 teachers with chalk and blackboard. Teaching these kids is hard, especially at harvest times where they often do not attend for days or even weeks at a time, even the smallest of hands is welcome to pick up the precious droppings of harvest.

The school was finishing at lunch time for the end of year holiday. I was asked the previous evening if I wanted to come and bring a present to exchange with the kids. I hurriedly brought 2 large tins of biscuits and did not have time or forethought to wrap or prepare them.

The table in the dimly lit hall held an assortment of shaped boxes all carefully covered in a variety of colored and patterned paper most crowned with ribbons they looked magnificent. 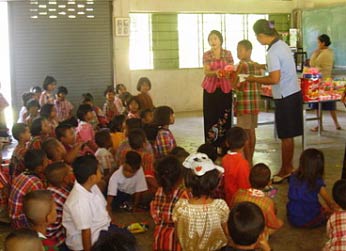 The kids' ages varied from 4 years old up to 12 years old and all looked very happy. Already you could see many of the young girls had the Isaan hallmarks of grace and beauty, and the boys had pure mischief in their eyes. This was a happy place.

A ticket system had been devised and all presents had a number on them, even though there were only 45 kids the attention of exchanging presents took some 2 hours.

I watched as one of the smaller children carefully took the wrapping of his present to find a small box and carefully started to open it. I looked in bewilderment to see it was a box of matches and he looked down at them expressionless as he slid it open to see the red match heads.

Another child took the wrapping off of his large box and I saw it covered a box of Regency brandy. Wow, this is more like it – they start them off young here I thought. He opened the box and looked inside and put his hand in then took out some wafer biscuits and started to eat one. I last saw him as he walked out of school still with the box. 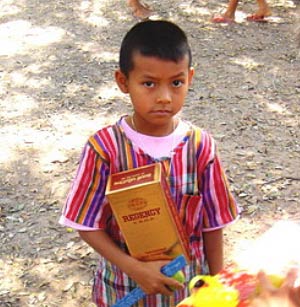 I was starting to feel a humbling lump growing in my throat as each child was given 3 small oranges as a parting gift for the holiday from the teachers. This was a poor place even beyond my previous comprehension. 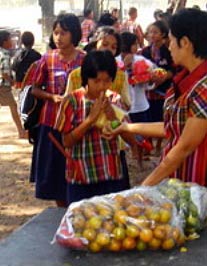 Although this was primary education. There are 3 options open to these kids at the finish of high schooling.

– Work on the farmland.
– Work in one of the few stores.
– Come to Bangkok and get thrown into the meat grinder.

If you’re lucky and bright you may get the chance to further study, but without a grant this is only a dream to these kids and considered by many parents as one less pair of hands on the farm.

The village has a video game shop where for 20 baht an hour boys can come to play a variety of western games on one of the 10 Playstation consoles. Boys in this store with what you could see were a fast developing western rapper attitude. Football was the favorite followed by (GTA) Grand Theft Auto, a game of extreme street violence where money and street killing comes very easily at the flick of a finger.

Even at 20 baht for an hours play the shop was full.

One teacher openly tells some of the girls to go to Bangkok and marry a farang and get money so your parents don’t have to work even at this early age – it’s being driven hard into them.

To be fair if I was a teacher here I would be telling them the same thing. Money is vital to survival here and its true value is known. These kids see it in mia farang corner every day and the comfort it can buy for those fortunate to have entrapped them a rich farang.

Any country's future is held within the hands of its young and those that educate them. These teachers have an upward battle and the kids a tougher one.

A pig was to be killed by one Thai family in the village to eat on New Years Eve but it managed to escape at the prime time and was chased through the village streets in what would have put the Spanish to shame. In the barbaric way it was trapped again and killed by blood hungry youths. Almost in an identical clubbing scene from GTA.

Just like the wild orchids that grow in the area, many of the young will find there way to Bangkok to slowly suffocate and wither in its madness blinded by misinformed dreams of life they will never have in Mia farang corner.

Many villages have a mia farang corner now, it would seem.

This was a touching story.

My God, What Have I Done?