How Lucky I Was To See Thailand

Before I begin my submission I would like to thank Stickman for his great site, and for all the other people that have posted. The site has become very important to me, and readers will realize why as they read (and I hope you will!)

My fear in writing this submission is that people will find it boring, as there are no stories of bar-girls or any mild details of physical pleasures received while in Thailand. PLEASE READ ON!! I am writing because I want to share with everyone the immense joy I had seeing a new part of the world, and how I was affected by it. I need to give some background information on myself before I get to my experiences in Thailand, and my feelings about Thailand after the visit.

I am a 24 year old Canadian male. I live in Alberta. I have come from a relatively poor, very religious Mormon family. Due to many different factors, I was never provided with an opportunity to go anywhere outside of the main area where I live. Until the age of 20 I never ventured farther than a couple of hundred kilometers of the city I live in.

In time, as I grew older and broke free from the “chains” placed on me by my family’s religion and began to think for myself, I began to greatly desire to see other places in the world. But at the same time I wanted to live a normal life in Canada, so I did things like buy cars and computers and all the normal things that people do, resulting in a lot of debt, making it hard to even get the money for travel. I also began to study science at a local college.

Eventually the desire to see somewhere other than southern Alberta was nearly unbearable. I paid out all my loans slowly and made a commitment to stay out of debt for the purpose of travelling. I also met a girl who had a petroleum engineer as a father – she had grown up all over the world as a result of her father’s jobs. She encouraged me to find a way to travel, which gave me the last little push needed to stop dreaming and finally do something. So I finished my semester and got a summer job doing the one thing that unskilled labourers can do and make a huge pile of cash – work on an Alberta drilling rig. There are immense amounts of oil and gas in Alberta, and over 700 rigs. The job is horrible and dangerous, but I pulled in huge amounts of money. The plan was to work for 3 months, then take off in August to a new part of the world, come back and start school again where I was studying Geology and Commerce in September.

I am writing to share with everyone some of the best, most lovely times of my life. One of them was the purchase of the ticket…and the glorious realization that a real dream of mine was going to come true…the plane ticket in my hand was one of the most exotic experiences I have ever had. The route: Alberta to San Fran to Tokyo to BKK…The day finally came…I wish to share with you all how content I felt settling in the enormous 747 as it was getting ready to take of from San Fran. Everyone told me how terribly long and painful the flight over the pacific would be, and at the time I told them all that I anticipated it to be the best day of my life, the though of flying over 8000 kilometers of ocean was unbelievable!! But they were right…crammed into that economy class seat for 10 hours was terrible, but nothing could stop be from being excited!

I physically felt like crap when I got to Tokyo. But the though that I was in Japan, in a basically new world was so so so immense. I constantly replay it all in my mind, over and over again, as the sweetest, most savory memory that I have. My girlfriend was waiting for me in BKK, as she had been in Asia for the whole summer (the aforementioned girl I spoke about previously), so I hadn’t seen her for a while, and was quite excited. I finally boarded the plane bound for BKK. On the plane, just before landing in BKK I had another one of these experiences that I feel is today so important. It was the city of Bangkok…kind of, it was night time so all I could see where lights, but it seemed to stretch on forever, and it seemed so alien to me, almost creepy. But the image is genuinely, permanently burned into my mind, and when I close my eyes I can see the city and all the lights before me. This is so important to me because it symbolizes a dream come true for me, and meant nothing less than the best, most exciting moment of my life and also embodied adventure and new experiences.

I realize that I will bore everyone with all the details of the trip, and I want all readers to read this and hopefully get something out of it, so I will try to leave boring stuff out. The ride from the airport to the area we stayed in was amazing. Driver spoke no English, odd signs, everything was the same, yet so different. Odd music etc. I soon became embarrassed to be staying on the Khao San Road area, because I soon realized that I was not seeing anything new, but that desperate Thais were simply trying to make a decent living by selling all us tourists fake, dumb shit. The Khao San Road was not what I wanted…I wanted to leave my western lifestyle and embrace something new…although today I know this is not possible. I really don’t blame Thai people for overall having a bad concept of young, farang tourists; it was lack of knowledge that made me think at first that I was anything other than another one of the thousands of farang backpackers that come here each year…but wait…not true! While I did do standard tourist trail activities…I also was not there to party, get laid, or buy fake diesel jeans. My favorite times where when I was walking by my-self down some random street…like this one 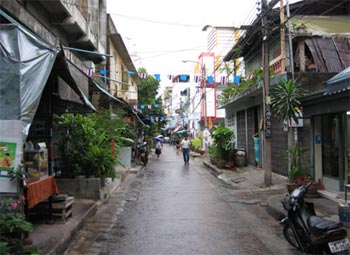 Or attempting to get a gaze at how these people live ate and behaved. I really loved MBK, and couldn’t believe that a whole floor was devoted to cellphones! 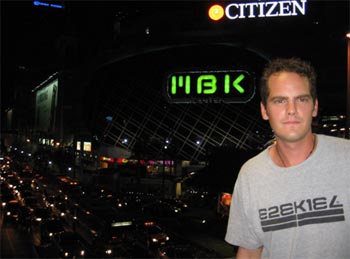 I also went to Cambodia and saw the “you know what”, which was genuinely amazing. 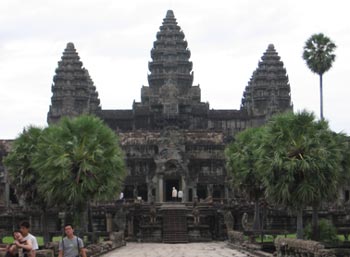 My girlfriend had a pretty serious asthma attack in Siem Riep. 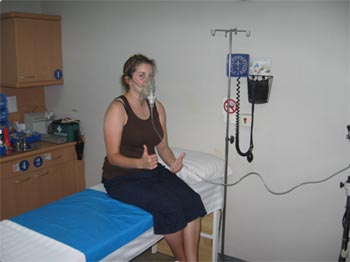 We had to fly back to BKK and had a very memorable time attempting to get into a real hospital, which we eventually did, complete with a piano player in the lobby!! LOL

All too soon my time came to an end. I attempted to not think about it to much and enjoy myself, but I knew in the back of my head that I had to leave…

I have now been back in Canada for 4 months and not a single day goes by without me missing the place and daydreaming about eating at food stalls, or landing down in BKK etc. Imagine all this enthusiasm without having even sampled the bar-girl scene! I am now very actively planning on attempting to work in Thailand when I graduate from University, but I still got 3 more years to go! I have e-mailed Stick about job opportunities for geologists in Thailand, and I realize that one day I will wind up there, one way or the other. I am sure when that day comes I will learn all the lessons some of you readers have regarding living here, but until then it is a full blown fantasy and day dream. I also realized that regardless of economic conditions, there are happy and unhappy people all over the world. Canada is a first world, resource rich place, and Alberta sits on some of the worlds largest oil reserves, there is immense wealth here, and yet many people themselves are unhappy, have to do things that they do not want to etc.

Many a day finds me grumpy and feeling worn-down, just like a street stall worker in Thailand. It's all about a frame of mind, I met many a cheery person on my travels in Asia this summer, who regardless of existing without some of the western luxuries I enjoy, still have a smile that some days is cheerier than mine. I can’t wait to come back and see some more. Thanks for reading, hope you don’t find anything on the post to naïve. I would love to hear from anybody regarding this post, please don’t hesitate to write. See you soon!

But the big question is, will you come back with your girlfriend or, gulp, ALONE!