Having just returned from my 5th tour of Cambodia, I thought I might update fans of the country with a little news on the current happenings in the Western nightlife of Phnom Penh. I hope this report doesn’t come across as the “Stickman of Cambodia”. I would just like to pass on a bit of information with those readers who share the same passion for the country as I do.

At this point in time Heart of Darkness remains closed for at least another month due to an apparent shoot out taking place between some Cambodians. In the meantime the management utilised the downtime to engage in some major reconstruction works on the venue and the work can be visibly seen from the street. Apparently an upstairs floor is to be part of the new design too.

Heart is not the only Western frequented nightspot to incur recent violence, with Shanghai club having a stabbing on the front doorstep in recent months. A Chinese man was the victim of the altercation.

In the meantime another new player has hit the scene and taken advantage of the misfortunes of other late night venues. Butterfly is the name of the new late night hot spot and other than the fact that the 2 air conditioners on the dance floor barely work and the toilets upstairs are putrid (standard for a Cambo disco), it is the place to be after 2am in Phnom Penh. Butterfly has a disco area and an upstairs outdoor lounge area, it’s drink prices are cheaper than most of the other clubs, music is a mix of RnB & dodgy Tekno, it gets busy after midnight and closes around 5am and it attracts a similar crowd to Heart of Darkness.

Another reasonable club has opened up on the river named River House. I love the layout and décor and it feels very comfortable except for the fact that it is only RnB and there are not many bar girls or hookers in there. I guess it is a bit too upmarket and in the wrong area for the hookers. I never did work out why they don’t really go there.

Martinis is still the same familiar place full of Cambo & Viet hookers arguing with each other over the Westerners. The dunnies still stink and the speakers on the dance floor still don’t work properly with the subs & the horns not going. It is quite an interesting experience dancing to only midrange. I can stand directly in front of the speakers and still conduct a normal conversation with the hookers trying to convince me to part with US$20 for their services including “Yum Yum”. I will never grow tired of Martinis.

The Walkabout Hotel clientele still hasn’t changed a bit and you can walk in there at any hour of the day and pick up something with 2 arms and 2 legs resembling a Cambodian female. The owner Glenn was particularly friendly to me as he always is even though I am a bit of a cowboy and that makes it all the more pleasurable to spend my money at his hotel. To stay competitive in the tough Cambo marketplace he has reduce the prices on his rooms by about 15%. But I also noticed Walkabout’s rooms were always full as was Flamingos around the corner. Flamingos is a bit newer and cleaner and many Cambo travellers raved to me about the place but the rooftop bar there is not so busy anymore and I still like Walkabout because there is about 50 meters less distance to walk when you pick up a chick across the road at the clubs. But you can be the judge and decide for yourself. 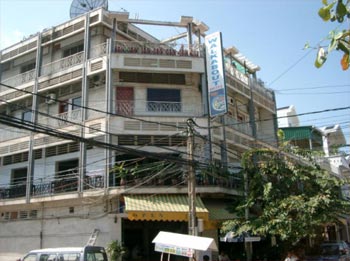 On the top floor of the hotel just behind the Walkabout hotel is a massage parlor. It is not a full service establishment but it is very cheap, clean, handy and has quite attractive Vietnamese women in the fish bowl. This time I made the mistake of selecting 2 best friends for my massage and whilst the event only cost me US$4 for the hour, the girls spent the entire time yapping endlessly to each other and the fact that they couldn’t speak a word of English made it very difficult for me to encourage them to actually do their job. Needless to say they didn’t receive my usual tip. On previous visits I have occasionally been offered yum yum or the full service depending on the girl.

I had to include the following photo to show you. Late one afternoon I came down from my hotel room with my hangover pretty finally well shaken off from the night before. I went outside and bumped into my moto taxi rider and he enquired as to how I was feeling. The first word that came to mind was “horny”. Instead of going next door for a short time he suggested that he take me somewhere really good. I’m always up for adventure so I said what the hell and we took of in a Southerly direction for a few klicks. The photo below is where we pulled up and a heap of girls were presented to me for US$5 a head. I have shagged dodgy chicks that cheaply before in tin sheds but I just couldn’t bring myself to shag in this flea infested outhouse of a building. 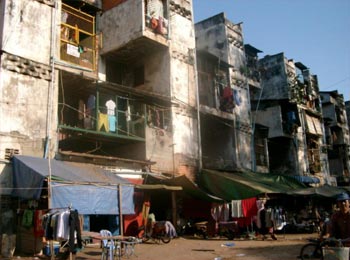 If you are like me and keeping fit at the gym is your thing, then you will not be disappointed by the exercise gym North of the city up Sirouth Quay road under the Japanese friendship bridge. It’s a bit dusty and a bit rusty but it is spacious and has all the machines you need to keep in shape. It is only US$2 for a casual visit but the friendly South African owner says that many of the tight arsed local expats even complain at this cheap rate. The owner then went on to explain to me that he had trained a number or international kickboxing champions including his own daughter and on account of my height and build he offered his services to me but I declined the generous offer on account of the fact that I was in SE Asia for lovin’ not for fightin’. But if any Stickman readers think they have what it takes and don’t mind the occasional broken nose and other assorted broken bones then look him up and become his little grasshopper. You might be the next world champion. 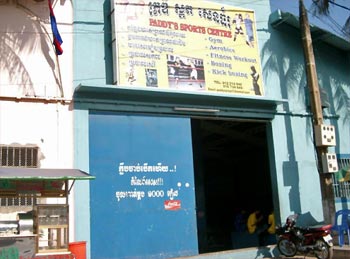 The endless hordes of amputees continue to infest the tourist areas, along the river and around all entrances to Central Market. What do you say to a beggar with both hands missing? After a while you become a bit desensitized to such sights and the smallest of loose change seems to satisfy them and keep them at bay. Lord only knows how they manage to survive in a country like Cambodia. Still I always find them to be cheerful and funny. In my last few trips I have gotten into the habit of going to the money changes outside Central Market (who give the best exchange rates in town) and paying US$3 for a cake of notes in the local currency. This stays with me at all time to keep the beggars happy. I have noticed that it does not matter how much you give them, just so long as you give them something they will smile, wave and move on. 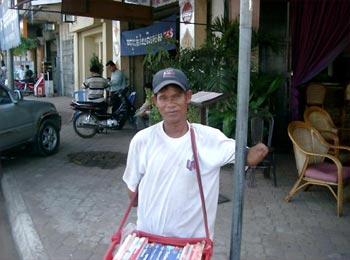 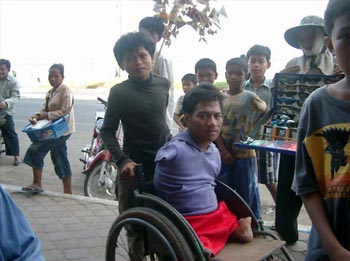 Since my last visit to Phnom Penh 9 months ago, ANZ bank from Australia has inundated the city with brand new blue ATMs. They are hooked up to the international banking system and they take all types of cards except Plus cards. Prior to this international banking in Cambodia was non-existent.

Since my return to Farangland I notice today that the worlds worst sex tourist that gives us all a bad name is up to his old tricks and back in jail in Vietnam. Garry Glitter should have taken more care to read the new billboards that have sprung up around the city over the past 18 months. 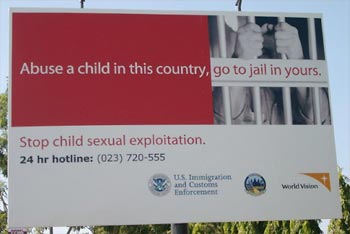 With all this competition around in the nightlife areas of Phnom Penh things are gonna get very intense when Heart of Darkness reopens in December. Somebody is gonna make some good money and somebody is gonna get their fingers burnt. I just can’t see that there are enough Westerners in Phnom Penh to support so many night spots so something is gonna have to give.

Anyway Phnom Penh still goes all night, still has neaps of cute Cambo & Viet chicks and is still amazingly cheap so keep it in mind on your next SE Asian tour.

Oh and I would also like to add that there is a really cool little wine bar named Rub's on 240 Street which is owned & managed by some very friendly Australians. They have a great menu and very comfortable décor & surroundings including a lounge area, bar area and street level court yard. The management also have a passion for house music but they don’t play it at ear splitting levels. It’s a really nice place so check it out if you feel inclined.