Back to Bangkok – a fun, young, inner city insight. Attitudes, experience, and an alternative guide to the city of Bangkok, one of the most amicable, vibrant and atmospheric cities in the world.

This year was to be different. I was being sent on my own. No family or friends to fly with, only my books and my backpack for accompaniment aboard the 11 hour direct flight from London’s Heathrow. I’d travelled on my own before to Chicago, I didn’t have a problem with it. It was just a bit tedious and lonesome on a long haul. Flying to Bangkok, or flying “back home” as my dad would say, was a very family orientated trip, occurring every year as naturally as the seasons shifted to summer. It was a cultural getaway, a family reunion, and a typical tourist holiday to the sun. But this year, I was journeying as a free spirit with no responsibilities, other than to myself. I had a friend from London over there and some cousins too, as well as the entire extended family. But being of age, I had enough independence to do as I willed.

Leaving the arrival terminal at Bangkok International Airport, I could see my cousin waiting for me outside the sliding doors, posing in his usual ‘effortlessly cool’ stance, smoking a cigarette and leaning on his yellow 1976 Volkswagen Beetle, the windows tinted, the wheels gleaming. I remember road tripping in this car since I was 6. Reliable German engineering. My grandma’s house was the first stop. Actually the second, after stopping off at the roadside stall near the airport for some quick authentic Thai noodles. This food fix has always been a tradition after the flight, just as in-flight food has had a tradition for being bland and tasteless. Nothing had changed much since I was young; same vender, same tables and chairs, same savoury noodle dishes. Same slums, people living in improvised shacks and joyful children playing down by the riverbank. This was Bangkok that you rarely saw in the travel brochures.

The house wasn’t far, but typical inner city traffic gave us a couple of hours to catch up in the car, sharing stories about girls predominantly. Young Thais always seem to be concerned with ‘love’, probably from the influence of too many romance movies and soft pop on the radio. But the aggressive and infectious hip hop culture of the West was starting to develop here, as I would soon experience. To know Bangkok, you must know the people. To feel first hand what the city is like from a view other than a tourist’s perspective, and to feel intimately connected with the city, a familiarity that makes this place feel like home away from home, you need to know people. There’s a secret unwritten guide to culture, customs, tricks and trades within the social communities. The feeling is almost euphoric in belonging. I consider myself to be a foreigner growing up in London, being only half Thai, and not being able to even speak the language fluently, I still feel at home on the streets of Bangkok as I do on the streets of London, 5000 miles and a complete world away.

After a night settling in at my grandma’s, talking to family over dinner in a traditional Thai kitchen and adjusting to my new time zone, I didn’t want to let the night slip away so soon. I love my grandma’s house, being there and absorbing the atmosphere; the sounds of the street merchants outside, people riding bicycles down the alley, motorbike taxis driving past and dogs barking. This great wooden house is older than my grandma herself, as are all the old houses on the block. These close-knit communities are the real traditional people that make up this city. The family values and social relations are age old and create such warmth in these amicable surroundings. Luxury hotels are superficial, built up back street villages in the city are the place to reside.

My cousin took me along to meet his friends and share some drinks at Siam Square’s chicest lounge bar. Siam Square is Bangkok’s equivalent of London’s Carnaby Street, but with a lot more shops, eateries and arcades. There are huge plasma screens adorning any available space on the advertisement plastered building walls, and shining brighter than any of the many hanging neon shop signs. Little walkways and alleys weave in and out of the shops leading you inside of Siam, revealing a maze of other shop parades, narrow arcades and take a wrong turn, filthy back alleys behind restaurants.

This was the social hot spot for young, metropolitan and more affluent Thais. In the day time it was buzzing with students, shoppers and tourists, as well as live music performances and dance shows. I had friends performing break dancing competitions on the main stage sometimes, and even a British band I had heard of were playing one night. This is the place to come, be seen and meet new friends. If you don’t talk to people, people will talk to you. Nobody flaunts, everybody seems unpretentious, and flirtatious. And if you seem appealing, you might even be asked to have your photograph taken for the Square’s magazine! Activities for tourists are abounding but to be embraced and immersed by Bangkok, you should approach the city as a citizen, not a sight-seer. So put down your ‘Lonely Planet’ guide on hotels, shopping and nightlife and take heed of my alternative insight into this fun, young, cosmopolitan capital.

Taxis, sky trains, and the underground will all take you to Siam Square. Huge cinema and shopping complexes surround the Square, but frequenting this place too often and seeing so many people you know becomes a bit monotonous. After the shopping, eating and social rendezvous here, I’d either take a taxi to my uncle’s, have a quick swim and collect my little cousin from the nursery, or I would sky train down to my friend’s house, play some basketball, DJ and make some plans for the night. Bangkok’s nightlife has always had an association with sleaze, gambling, cheap prostitutes and trance music pumping from filthy, violent bars downtown. Partially accurate. I’ve seen and experienced first hand bribery with police, fighting with Thai mobsters, betting with kick boxers and tourists who get conned out of thousands.

But Thai people don’t socialise around here, it’s a place densely packed with dodgy foreigners and mislead tourists believing this is Bangkok’s club land. Put on your street wise screw face and you won’t get bothered. Head down to Royal Central Avenue, the most exhilarating club strip in Bangkok, packed with mainly young Thai party goers and music loving foreigners every night of the week. It’s an avenue of chic, social, trendy night clubs. There are no drug, violence and prostitution problems here. But Thai laws have restricted the minimum age to 20, and police presence is covert but active. A visit to the infamous Khao San Road will sort you out with authentic looking fake IDs. Even British passports and driving licenses can be bought here for less than a London bus fare. Problem solved. ‘Route 66’ is by far the most popular spot on the strip, mainly attracting Thai students and young Thai clubbers in general. Not to mention the growing hip hop community here. Everyone seems to know everyone, and as I mentioned before social relations are close knit amongst Thai people. Making new friends is easy. Another step in becoming a temporary “citizen”, no longer a sight seer. I managed to acquaint everyone here from DJs, dancers, Thai pop singers and movie stars to pro golfers and British Grand Prix drivers! It’s a fast paced life, you live for the moment, and these nights will slowly drain your soul. So recharge by stopping off at Tong Loh’s busy food market cafes at 4am for some after party stir fry!

However enjoyable and euphoric you might find the modern culture and night life to be, don’t get too addicted. Wouldn’t it be a shame to travel 5000 miles and not explore the traditional and historical culture of Thailand? Life is about balance. Speaking from experience, enhance your experience. Visit the temples and palaces, stimulate your mind. Give your sight something new to look at and be intrigued by. I awoke at 5am one Monday morning to take a 2 hour boat trip down the river to the floating market, just outside of Bangkok. If you ever struggle to find peace of mind, take a journey here with some friends on a cool day. This market place is a haven from bustling Bangkok, and will really open your mind. Life is what you make it, as is whatever you choose to do during your stay. Pardon the philosophy, but one month absorbing this lifestyle will no doubt influence your thinking and enliven your insights into this city. And that was only in the first week. Welcome to Bangkok. 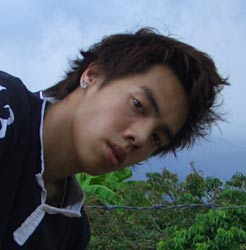 Comments to follow at the weekend. I am SO BUSY at the moment….no time to read through all submissions at this point in time.