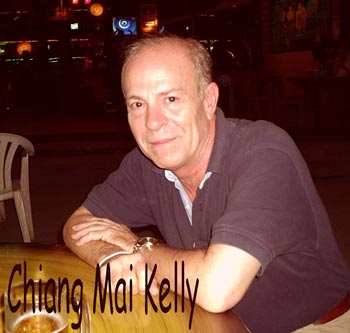 Next month I turn 60. I live on the outskirts of Chiang Mai in a stylish apartment with a view of the mountains 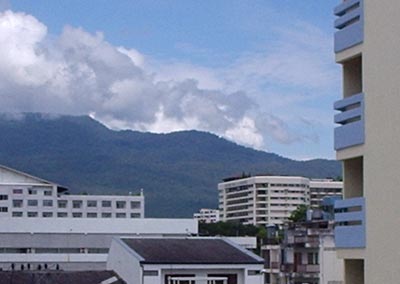 in the company of “Not” a 35 year old ex boxer at the Pink Panther whom I refer to as the Princess of Patpong. The Princess is not just a roommate. She is my body guard, a fearless woman who can easily tame a gaggle of policeman, any two
Muy Thai boxers I have ever met or a club full of Lady boys trying to grab my privates and that is when she is sober. Drunk I believe she could win the wars in Iraq and Afghanistan single handed. The only times I have ever seen her frightened
is when I sneak up on her and tickle her in the ribs. When this happens she jumps three feet in the air like she has been bitten by a snake, screams and starts cussing in Thai.

She speaks approximately two hundred words of English. I have endeavored to write these down but they are constantly changing. Words she knew yesterday she does not know today and words that she did not know yesterday she knows today. I have
no idea why this is the case.

She takes chili pills to make her breasts bigger. These pills work because her bras are constantly too small. Some day I know I will have a Thai Dolly Parton. I don’t really like big breasts but the Princess has her ideas about what
Farangs like and don’t like and I realize I am not going to change those ideas. 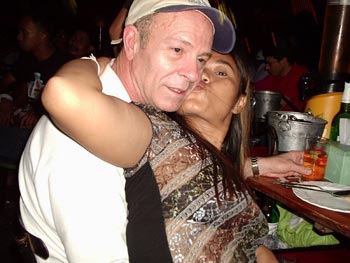 My apartment is air conditioned with a living room, extra large bedroom, a nice spacious bathroom with hot water and enclosed shower. I have a large balcony to cook or just watch the sunsets and enjoy the cool Chiang Mai mornings. King Rama the V lived
here. His wife sold the property to a developer who built my apartment. I mention this in case you think it is only Farangs that this happens to. It also came equipped with a Kelly green refrigerator, microwave oven and cable TV and free internet
access. This costs me $230.00 per month.

Our shoes are neatly lined up in a little cubby next to the front door. This is one of those things that makes a lot of sense. 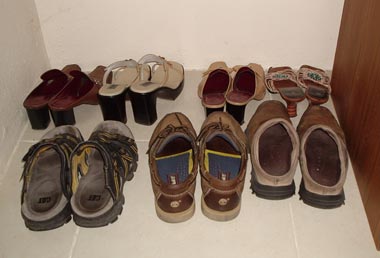 There are a lot of things in Thailand that don’t make sense. I have not discovered many of these but I am told by wise ex-pats that that is the case. However the shoe thing makes a whole lot of sense.

My apartment has lovely light beige tile floors that stay immaculately clean with just a light sweeping once a day and a mop once a week. The ants used to clean up the crumbs. I didn’t like the ants but Princess insisted that it was
a Buddha thing and we could co-exist with them. So she just swept them out on the balcony every day. That is until one of the ants invaded her “hoy”. Now, I can invade the Princesses hoy anytime I want. In fact she insists on it
every once in a while. She makes her intentions known by grabbing me in the crotch and butt in a pincers movement and throwing me on the bed and asking, “Kelleey you hooorneey?” I ask, “Princess you horny?” She coyly
replies “niiiit noooy.” So this pattern is acceptable to both of us but she draws the line at ants even with the Buddha thing. The ants had attacked her holy of holies and the next day we had every ant eradication device known to
man deployed around the our abode. It was ant ethnic cleansing day. I have learned to go with her on most things and eventually it works out.

While I am on the subject of things that make sense in Thailand one of my favorites is the No U-Turn signs. In the Western world “No U Turns” means one is not supposed to make a U turn. This is not the case in Thailand. No U
Turn means it is perfectly OK to make a U Turn if the traffic allows. It is also OK to ride a motorbike on the sidewalk or drive your bike the wrong way on a one way street or run a red light if there is no traffic. These are all things I have
done in the Western world but here in Thailand everyone is my brother. They all think these things are OK.

I have not spoken English to an English speaking person for the last two months.

I came to Thailand for four reasons. 1. I had not taken a day off work in my restaurant in the States for six years. 2. After having had an affair with two stunning 20 year old women for two years the one I was in love with dumped me for
a hatchet faced lesbian male impersonator (yes, you read it right she is a girl who pretends to be a boy who pretends to be a girl). 3. I had been in South East Asia for a few years in the late 60’s and always felt at home there. 4. My
gold Cadillac was getting really beat and as the geriatric Mac Daddy of Florida I needed a new one but could not really justify the expense.

I am not good looking, not in shape and not rich. So you may wonder why I was having an affair with two drop dead good looking 20 year old American women.

I owned a small restaurant and Evorah then a stunning 18 year old had been reduced to selling her blood for gas money after a short abusive marriage. Evorah is a high-risk person. High risk, high maintenance she is just more of everything.
At home drinking wine backstage with Sting (I am not making this up) or at an alternative nightclub pole dancing for a hundred gay guys or singing at an open mike night while completely naked or washing pots and pans in the back of my restaurant.

In every exotic move of her body she is a virtuoso performer. She was simply made for ecstasy. She exudes it and she can’t turn it off.

I gave her a job and a place to stay. When she recovered her dignity and put some money in the bank she informed me that she needed a 10 dollar an hour raise or she would quit.

I have been on the internet for 20 some years starting with CompuServe and a commodore 64. About 8 years ago someone told me about on line amateur on line porn. I was going to a costume party and was dressed up as a cleric when I first tried
it. I was father Guido and heard confessions of naughty boys and if they were real nice to me and stayed on line for a long time I would raise my cassock and let them perform penance. You know, three hail Marys and three our fathers and then you
get the holy water. People actually paid for that stuff back then. My next door neighbor soon joined my endeavors. She had pretty toes and we set up a toe thing. Father Guido and Sister Tina a big nun with talented toes. It was a seller. But the
service cancelled me because my content was too controversial for the mood of the country at the time.

Zoom ahead a few years and I was online again this time via Evorah. Evorah soon realized that couples got paid more than singles so she started doing me in the office and then chopping vegetables. She had another realization that two women
and one old guy really paid well so Nikki joined us and the ladies were making about 50 big ones a year, I was happy and the vegetable were still getting chopped. I got a lot of fan mail informing me I was the luckiest man on earth and at the
time I agreed with them. I never took any money for our endeavors. I figured I was getting plenty of benefits so the girls got all the cash. We did start going to swing clubs together because both girls by that time were raging exhibitionists.

They wanted to go out and dance and drink and party but since the drinking age is 21 in Florida I couldn’t take them on the club/bar route.

So I had to put up with the emotional roller coaster of their relationships. It was my own little dysfunctional Disneyland.

Finally, I fell madly, ragingly in love with Evorah. I asked her to marry me she said yes and then no. I promised her the moon. I did not have the moon but I tried. To no avail.

Then one day I started doing strange things. I started taking cold showers and throwing my toilet paper in a waste paper basket in the bathroom. Although I have a large kitchen in the States I cooked my meals on the lanai and washed my dishes
in the sink in the guest bathroom. I began to sleep on the quarry tile floor at the restaurant for short naps. I developed an obsession with motor scooters. I began eating noodles for breakfast. Instead of napkins I put out rolls of toilet paper
on the tables of my restaurant (this did not go over real big). I started flirting with the Vietnamese nail girls in the same block as my restaurant (who thought I was nuts).

It wasn’t long and I was sleeping on three airplane seats while flying over the pacific bound for BKK.

What Did You Do During Ramadan, Daddy?