I have just returned to Phuket, from a trip up-country, taking in Pattaya, Chiang Mai, Chiang Rai, Bangkok and Khon Kaen.

Nothing holds this happening place back, from Soi 6 BJ's right there in the bar, to naked Russian a go-go's off Walking Street. Add to this a plethora of great eating places and cheap beer. To misquote Oscar Wilde (Who would have loved the place, maybe) "Anyone who is tired of Pattaya is tired of life".

Same old few bar beers and 'Spotlight' a-go-go near Tha Pae gate. Small bottle of Tiger usually 60 baht in the bars, not many girls about compared with 5 years ago, but the bars across the moat from the Spotlight, on the 'T' junction, are a great people watching spot in the afternoon. Try to spot the farang lady without hippy style clothing and the ubiquitous sling bag, some of the guys have them too. 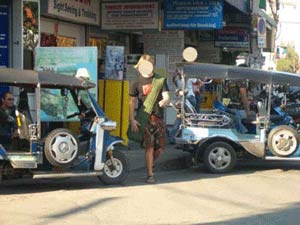 Shudder to think what they contain, but they probably didn't get the contents from the monks.

There is also a new clutch of bars (new since I was last there) in a long hangar type shed near the Suriwongse Hotel. Again very few ladies, and no stunners that I could see, but then I have probably been in Thailand too long, and my expectations are higher than most new boys.

Well, the governments clampdowns, or something, have almost decimated what nightlife there was. There is a small dog-leg soi near the big clock, (sorry this is not a professional report, so I can't tell you street names, but not far from the Wang Come Hotel). Out the front door of the Wang Come Hotel, turn left, left again down the side of the hotel, then right and you will see a 'Carling' sign on the corner of the Soi.

Last visit, 5 years ago, there were about 6 a-go-go's, at least three of which were reasonably stocked with decent looking girls, some stunners. Now there are 3 a-go-go's with one girl dancing in each, and a couple of ugly ones outside. Can't tell you the price of the beers cause I couldn't bring myself to sit down and have one after peeping inside. There is a fourth go-go, but you wouldn't want to know about that one, unless you play for the away team.

Go back to the 'Carling' sign, turn left and go straight on keeping the back of the Wang Come Hotel to your left. At the other end of that street there are a few bars / eating places, at least one with a pool table. Tiger beer 60 baht and a few comely wenches to talk to. The 'scene', like most Thai provincial cities would seem to revolve around the massage and karaoke joints (not forgetting the ubiquitous 'lady homes', ask a tuktuk driver for those.

Just gets more and more expensive. On Soi 4, 90 baht for an afternoon small bottle of Tiger beer in a street side open bar. Compare this with a similar Tiger in a similar Pattaya bar, 40 baht. OK, overheads in Bangers are no doubt higher but not nearly by that much.

I don't go to Bangkok too often, so I probably notice the price hikes more than the people who live there. Maybe it is no coincidence that the bars are getting quieter and quieter.

"Oh dear, another slack week, I guess we will have to increase the prices again to make up the lost profit".

Uh! Oh well, that's another place I never knew that I didn't want to go to. Great Thai buffet lunch in the Charoen Thani Princess Hotel. All you can eat, including Japanese food, various soups, Thai dishes, fruit and even farang style cakes buns and ice cream for afters. All for 129 baht, yes, 129 baht, plus tax plus VAT of course, still great value, but in itself hardly a reason to jump on a plane to KK.

Home at last. It is wonderful to be a star again. Before Christmas the place was packed with handsome young men from all over the western world, and I looked like Bernard Manning.

Now all the young guys are gone, (most safely home, I hope) and I look like Brad Pitt. That is to say, although it is very quiet, there are still more than enough girls to go around, and any guy with a full wallet is looking good. Rock Hard has dropped their barfine to 400 baht, according to their website, but I have found no-one else that is following suit. Generally 70 baht for a small bottle of Tiger, 60 baht can be found, but up to 120 baht in the a-go-go's.

Phuket seems to be the most expensive place in Thailand for lady drinks, varying from 100 baht to 180 baht, for the usual splash of Coke or orange. Who cares what they get to drink, you may ask, as long as they sit a while and we can talk, etc. with them. But all too often, a girl will take a Tequila shot, sling it down and walk away, or in the case of a go-go, even some bars with poles, go to dance and not return, going to sit with another guy. You may or may not know that here, and other places in Thailand, you can complain to the mamasan or manager if this happens, show her the untouched / unfinished drink and she will usually make the girl pay for it herself.