Sometimes good results can be had by going against conventional wisdom and common sense. Mouldy French cheese, for example. Bleu cheese was probably made by accident the first time, but some adventurous soul figured out that, not only does mouldy cheese
not kill you, it tastes pretty good on salads.

In Isaan, they've figured out that if you do absolutely everything the FDA tells you not to do with meat, such as stuffing it raw into a severed bull scrotum with a bunch of herbs and hanging it in the sun for up to a month, you can still feed it
to your friends. And, as long as they're from Isaan, you'll still have friends afterwards.

Aiming lasers at your eyeball is another one of those things that goes against common sense, but I went ahead and did it anyway. I paid a Thai doctor $1,500 to vaporise parts of my cornea and presto! I can see.

I've been a slave to glasses and contacts since I was seven years old. My vision was so bad I wouldn't get out of bed without some kind of vision correction on my face. A whole section of my left temporal lobe is dedicated to remembering where
my glasses are in the morning. This weekend I changed all that with some elective surgery.

After shopping around for eye doctors and hospitals in Bangkok, I settled on the one that gave me the sternest warnings about how I was to prepare for LASIK, which I think stands for Laser Inyoureyeball Keratotomy. One large, popular, centrally located
hospital told me I should not wear contact lenses for three days before the surgery. An eye hospital in another area told me I should not wear contacts for at least a week, plus I'd have to wear plastic cups over my eyes at night for a week
after surgery to prevent me from rubbing them.

The eye hospital wasn't the cheapest in town but they seemed the most thorough and careful when talking me through the procedure. And who wants to be cheap about their eyesight? That said, the price was less than half what it was when I checked six
years ago at hospitals in the US.

"You Won't Feel a Thing"

Maybe it's just me, but local anaesthetics never seem to work. I can always feel dentist drills. Not to mention lasers on my eyeballs.

Doctors who do eyeball surgery, or anything else for that matter, will tell all their patients that the procedure is painless. What people don't know is that, before graduating, doctors must all pass a course in bare-faced lying. Anyone with an ounce
of sense will know that, no matter what anaesthetics they give you, cooking your eyeballs is going to hurt.

I was stuck in a room for 30 minutes before the surgery while nurses put antiseptic eye drops and topical anaesthetics on my eyes. They may have been pretty nurses but I didn't have my glasses on at the time and later my eyes would be on fire. One
asked me whether I was scared. Truthfully I told her that I was.

She said, "I know. Most men who come in here tell me they're not scared, but when I check their blood pressure it's always high. And even though the operating room is kept very cool, I can see them sweat."

As amusing as her story was, it wasn't exactly what I'd call a good bedside manner.

Once the eye drops supposedly took effect, I was brought into the operating theatre and laid out on a rotating table. The nurses tried a couple of times to attach a rubber sheet to the upper and lower eyelids of my right eye. When I say, "attach,"
I mean with actual tape. I guess one always uses tape to attach things, but it just seems a little weird to tape stuff to eyelids.

When they realised the moaning sounds I was making meant that I could still feel my eyes, they dumped some more anaesthetic in. When they then realised that the anaesthetic wasn't working they went ahead with their taping anyway telling me, "Mai
Pen Rai," that it was OK. Yeah, OK for them, I guess.

The doctor then took a metal clamp with four hooks and further prised open my eyelids. If I was to choose a proper word to describe that sensation it would have to be pain. Pain, combined with a sting and a deep, throbbing ache that went to the back of
my head. Also a deep and abiding sense of revulsion. Yeah, that begins to cover it.

Of course, since all this was happening to my eyeball while I was awake, I could see it really well. It turns out that a wet swab applied directly to the surface of your eye isn't just a big brown blur. It looks very clearly like a giant wet sponge
sliding across your vision.

They rotated me under the hulking machine and told me to focus on a red flashing light. After swabbing my eye, the doctor took a suction cup on the end of a long plastic tube, and pressed it against my eye. As an assistant counted off units of pressure
(I think – this was all in Thai), the apparatus sucked at my eyeball. This was done either to make the cornea bulge out a bit for the next step, or just for some sick fun.

The doctor then fit a metal tripod over my eye to hold it in place and, using a tiny whirring saw, sliced a semicircle across my cornea and peeled back the flap. At this point I was thinking, with the entirety of my being, "Eeeew……fxxxing YUCK!"

I was still supposed to look at the flashing light and keep my head very very still. I wasn't strapped in and if I had wanted to bolt out of there with my cornea flapping in the breeze, I could have. I wondered how many people do. The flashing light
was now a flashing blur since I was looking at it through half a cornea.

I clenched my teeth and stared at the red light while another, green, light came into view. The doctor said, "Here we go!" and a loud ratcheting sound filled the room.

I don't know which part of the operation was the sickest, but it was probably one of the things which now followed. When the laser hit my eye, I could see the red flashing blur slowly changing shape. Despite the fact I was still supposed to be numb,
I could feel a stinging heat. I could distinctly hear a crackling sound as parts of my lens were vaporised, and I COULD SMELL MY EYEBALL COOKING.

For the overly curious, I can tell you a cooking eyeball smells a bit like a burning electrical cord.

They hit me four times with the laser, repeatedly telling me to remain perfectly still. Despite the obvious wisdom of this, I could barely manage it. I was fairly terrified by this point and I could feel an uncontrollable quivering starting in my spine.

Once they were finished with the laser, the doctor folded the flap of my cornea back in place and spent a really long two minutes smoothing it out with a swab. Despite the fact that I had been a whimpering baby, the doctor said I was doing well.

They took out the clamp and removed the plastic. They told me to close my eye very slowly and carefully, which was unimaginably difficult as I really wanted to scrunch my eyes up and shudder for a few hours while muttering the word, "yuck,"
over and over again.

They taped a plastic cup over my eye and I sat on the edge of the table for five minutes and shivered.

Then I laid back down to do the other eye. 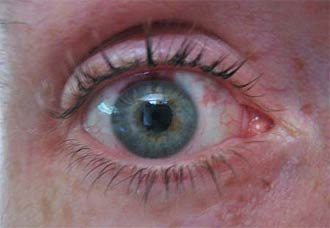 Figure 1: Post op eyeball. You can see a red strip along the top of my iris. This is the hinge of the flap of my cornea that was folded back.

The wife helped me make my way home by taxi with my eyes closed. I spent the rest of the day in blindness, warned against either opening my eyes or squeezing them tightly. The doctor was really emphatic that I shouldn't squeeze my eyes. She didn't
tell me why and I didn't want to ask because she'd probably say it was because streams of goo would shoot out of my eye sockets if I squeezed my eyes.

The next morning, I could open my eyes and, for the first time in my life, I could see without my glasses. Two days later, my vision was a little blurry due to the scar tissue on my corneas, and at night I could see giant halos around every light.

A week later I went back for my second follow-up visit. Eye tests were done and I found out my left eye still had a bit of astigmatism resulting in a slight shadow image. My right eye is perfect and I can now read distant signs as long as I have both
eyes open (with only my left, I can read signs in the distance if I squint a bit).

Good enough! I was more than satisfied with the performance and care taken by the Thai doctors and staff. I'm certain that I was wise in paying a bit more for the eye hospital instead of going to the big international hospital. You have to be careful
with places that have loads of wonderful machinery. They may not be all that well staffed and doctors may be inclined to pay the bills for the wonderful machinery by doing some unnecessary surgery.

Anyway, I'm very happy with the results. It's just about a miracle, really. A lot of stupid stuff is done with technology in this world but laser eyeball surgery is pretty fantastic. And I never ever want to do it again.

Man, there has been some hard stuff to stomach this week. One guy getting the big chop, you getting your eyes friend. What'll be next? Can anyone outdo these? GREAT piece by the way.